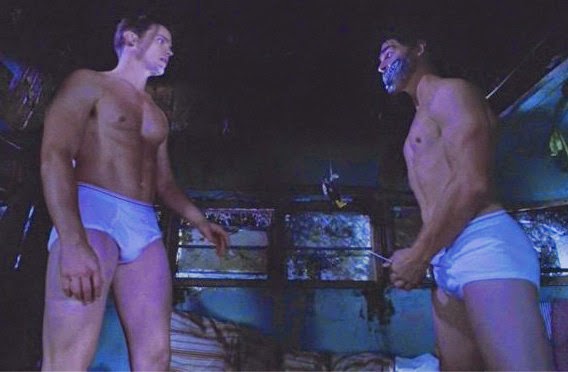 --Let it be etched into the stone tablets of history: American Horror Story is the show where Michael Chiklis played a gay man. Yes, world, It Gets Better.

--I imagine some people didn’t like this ep because, well, the show’s gotten a bit soap-operatic in places. Everyone has relationship issues and everyone has a torrid secret, yeah yeah yeah. Like I said before, I approve of the less zany pacing of Freak Show, and “Pink Cupcakes” mainly served to kick off Act Two and set up future strife. The big thing right now is our sleazy con artist (his actual name is Stanley. About time we found that out!) and his quest to turn a freak into a museum exhibit. Rather obnoxiously, the show kept faking us out by showing dead characters in jars and then going, “LOL, this hasn’t actually happened!” That is cheap storytelling, show, and to be honest, I half-hoped the “deaths” of Bette and Dot would turn out to be legit, because it would be such a grim and unexpected move. It was certainly a horrible sequence, as Stanley poisoned the Tattlers with the titular confections and Dot found herself sharing a body with her dead sister. But it wasn’t real. Obviously. Stanley is capable of murder, though, and Esmerelda was concerned enough to try and talk Jimmy into scarpering. But Jimmy...hasn’t gotten over Meep yet. Good lord, tell me that’s not gonna be his one big issue.

--Yep, Jimmy is still all, “Bawwww, I got the gimp killed!” and I sympathize, but it undermines his strength as a character. Jimmy wound up crying on the shoulder of Desiree, who’s also morose because Dell’s never home any more. The two of them started up some hanky-panky, interrupted when Desiree began bleeding from the place you don’t wanna bleed from. Ethel took the voluptuous herm to that kindly old doctor from before, who revealed the truth: Desiree ain’t a herm, she’s all woman. Her “ding-a-ling” is an oversized clitoris, and a bit of cosmetic surgery could make her fully normal. Plus, the blood was from a miscarriage, and now Desiree has a motherly glow in her eyes. Of course, her happiness can’t last, but I’m just pleased they gave her this much screen time. Because Angela Bassett is so awesome to watch. I can’t even.

--Not surprising for someone who named her son “Dandy,” Gloria Mott hasn’t a clue what to do. Upon discovering Dora’s corpse, Gloria was mad enough to not buy Dandy’s attempt to play innocent, but she did swallow the idea that her son just can’t help himself. After all, he’s a product of aristocratic inbreeding! Of course he is! The notion that Dandy’s parents were also cousins is amusing, but I’d almost prefer there to be no explanation for his lunacy. It’s scarier to imagine that sometimes, psychopaths just happen. Anyway, Dora’s body is buried and Dandy, like so many serial killers before him, has directly linked murder to his libido. Which led to him being disturbingly sexy, as he oiled up and worked out in tighty-whities and tennis shoes while composing some sort of mental manifesto about how his gorgeous psycho body is a metaphor for America. Or.........something. The amount of manflesh on display was no coincidence, because...

--Dandy went hunting at a gay bar, which was definitely the sexiest, hippest, and most crowded gay bar one could possibly hope to find in Florida in 1952. But what I didn’t expect, what kind of amazed me, was the other familiar face among the clandestine gays. Dell Toledo, ladies and gentlemen. The show just explained everything about his character. A man who’s never happy, who’s overly macho but also uncomfortable in his own skin, who seeks out women with male characteristics because he thinks, wrongly, that it’s a functional substitute. Dell suffers from the closeted, confused, alienated pain of being gay in 1950s America. Worse, he has a secret boyfriend, an artist/hustler named Andy (Matt Bomer), and Andy sees Dell as just another john, and Dell wants sincerity but doesn’t know how to be sincere himself, and Michael Chiklis fucking killed it this week. I never would have thought. But, hey, just shows we’re moving past stereotypes. Unfulfilled, Dell returned home to Desiree, who confronted him about Jimmy’s parentage and moved out. And then Dell went to that nice, kindly doctor, the one who treats freaks like human beings, the one who could make Desiree normal...and Dell snapped the doctor’s fingers like matchsticks. Poor Dell. Thug and monster by choice, because he thinks he has no other option.

--Maybe he doesn’t. Because Andy went home with a murderer. Home to the Dharma van. Andy and Dandy, what a pair. Two gorgeous guys stripping down to their underwear, as Andy contemplated his dreams of homoerotic art shows. Whereupon Dandy stabbed Andy a bajillion times and tossed his severed limbs in a bathtub full of acid, while Andy took a very, very long time to die. (“You’re making me feel bad!” whined Patrick Bateman Junior.) Vintage AHS: you cringe, then you laugh, then you feel horrible about laughing. RIP, dude who might have had a future one day. Now Gloria’s got more cleaning up to do, and meanwhile, she got a call from the last person you want pissed off at you: Gabourey Sidibe, playing Dora’s daughter, Regina, an upwardly mobile schoolgirl perturbed by her mother’s recent silence. Gloria’s between a hunk and a hot place. The former is her bloodsoaked son, still expecting Mommy to fix his problems, and the hot place is Hell, where she is probably going.

--Last but not least...Stanley wooed Elsa with tales of TV fame. Elsa scoffed, until her latest “Life On Mars” performance resulted in boos and flung popcorn from the local rubes. Meanwhile, Stanley was also seducing and/or attempting to murder Bette and Dot, so Elsa decided she’d had enough of the competition and dumped the Tattler sisters on Gloria and Dandy’s doorstep. Well, GREAT. Now nobody’s happy at all.

--I know I’m not. Because now I want some goddamn cupcakes.
Posted by Dang-Blasted at 3:36 PM