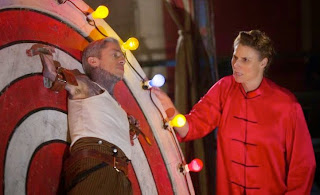 --Deah dah-ry, it was nice to see Bette and Dot have some actual freaking screen time in this episode...even if they, like so much else, are a giant tease. “Bullseye” was all about teasing us with things that may or may not happen, and if at least some of those things don’t come to pass, I will leave Freak Show feeling like it was all foreplay and no real sex, if you know what I mean. The thing is, foreplay can be really awesome and feel great. Doesn’t mean it’s okay to be left with blue balls.

--The tease surrounding Bette and Dot is The Surgery. A grotesque thing to imagine, one which Bette refuses to think about and Dot desperately craves. Life within the Mott manor is quite plush for the Tattlers. As ever, Bette reacts to the change of scenery with dewy-eyed bliss, while Dot is pinched and suspicious. Dandy, however, is a boy transformed. He’s in love! He’s gonna marry the twins and be a real man, finally! Gloria is torn between hope that her son’s murder-a-thon is over, and selfish dread that she’s losing him in other ways. (I like to imagine that she’s thinking, “Dammit, if I hadn’t named him ‘Dandy’ none of this might be happening!”) Dot only warms up to Dandy once she sees a news article about conjoined twins who were separated. Oh, but one twin died. Boo hoo. Dot don’t care. She’s still smitten with Jimmy and she wants Dandy’s cash to fund her Bettectomy. So many characters, lovestruck over things they can’t have.

--Elsa. I kind of hate her, honestly. Like, even her tragic backstory came about because she was stupid enough to let evil men drug her and tie her to a bed. It’s her birthday week, and she’s getting all kinds of presents, one of which is a male phallus that’s possibly tattooed and hopefully not beflippered. Yes, Elsa’s sleeping with Paul the Illustrated Seal, and Paul can’t help but feel like he’s being used. Just as Elsa uses all her freaks, one way or the other. Yes, she rescued them from awful places, but it seems clear to me that everything she’s done has been self-serving. She saved the freaks because she knew they’d be in her debt and because, let’s face it, she figured most of them would be too mentally inferior to see her as anything other than a saint. Which makes her a shitty person, as she kept on demonstrating this week. So, another tease: how long before Elsa goes too far? If she hasn’t already.

--Paul got a lot of screen time this week, which was awesome. Shout-out to actor Mat Fraser, who has Thalidomide to thank for his small arms, and who is a also a drummer and performance artist. Dude has formidable screen presence! Paul may be schtupping Elsa but he’s also sneaking off to canoodle with Penny, that candy striper from the first episode. Penny, who is played by that not-terribly-talented Meryl Streep daughter who stabbed the shit out of Danny Huston back in Coven, is basically a whiny teenager who hates her whitebread life and gets into shouting matches with her daddy over who doesn’t appreciate whom. Sigh. Dunno why Paul wants her. But he does, and a trip to the pharmacy for some ritzy perfume led Paul to cross paths with Dandy, who is buying...two hairbrushes? Two ladies’ headbands? Hmmmmmm. Paul is vewy, vewy suspicious.

--The tease that’s really getting on everyone’s nerves is the con artists and whether or not they’ll actually murder a freak. With the twins gone, Stanley’s new target is Jimmy and his Shamu hands, only Esmerelda, who loves Jimmy?....I guess?...talked Stanley into snuffing a different performer: sweet little Ma Petite. Another shout-out to actress Jyoti Amge, who is officially the world’s smallest living woman, and who is (sorry if this sounds condescending) so bloody adorable that anyone with a soul fears for her safety. Hey, like I said last season, it’s a bad idea to ignore what makes some people different, but we should totally respect them for being the radiant folks they are. Ma Petite’s petiteness is why it was really fucking awful and disturbing to watch Stanley and Esmerelda stick her in a jar and drown her in formaldehyde. SHUDDER. But of course, it was just another fantasy/dream/what-if sequence. No more of those, okay, show? Especially if you’re not really gonna follow through with it. I don’t want to see any more freaks die, but in some ways it’s worse to have no payoff at all. Esmerelda found she couldn’t bear to kill Ma Petite, and now Stanley’s super-pissed and is demanding that Esmerelda ditch her soft side. Not sure what kinda leverage he has over her. Hey, Esmerelda, Stanley’s got a mega-penis. Why don’t you send THAT bad boy to the museum in a jar?

--Desiree and Dell were an effective tease this week in that they didn’t get one second of screen time. See, show? This is what happens when you overstuff your cast!

--All the suspicion, the behind-the-scenes grumbling both real and imagined, was too much for Elsa. When Paul confronted her about the twins, she threw a titanic Jessica Lange tantrum, which led right into this week’s ham-fisted metaphor, the bullseye. In her glory days, Elsa used to fling knives at a “victim” strapped to a spinning target, and she made sure we knew the symbolism. How fate spins you in all directions. How even a skilled human being can fuck up. How you can guess the trajectory of the blade, but you can’t predict it perfectly. Y’know, like life and stuff. Not a bad metaphor, even if Elsa’s VOs explained more than they needed to. Rather bizarrely, Elsa demanded that a freak get on the wheel and prove their trust. Paul volunteered, maybe because he felt bad, or because he didn’t want to see his fellow freaks in danger, because he’s a better human being than Elsa will ever be. The wheel spun; Elsa flung her knives. Was it all a big fake-out? No. Her third knife connected somewhere in the vicinity of Paul’s pancreas, and Paul is now bedridden, maybe dying. Elsa was all like, “OH NO WHAT HAVE I DONE REMORSE REMORSE”....but she didn’t call a doctor. Because she sucks that much.

--Pray for Paul. And pray the other freaks get a clue. Ethel bluntly promised Elsa that she’ll kill her if she discovers treachery. I kinda wouldn’t mind seeing that. It’s another tease, along with the tease that Penny’s shotgun-wielding daddy might follow her to the freak show and the peace between the freaks and the Jupterites may be ruined. Oh, and the tease that Jimmy might face a bigger threat than Stanley’s plotting. His suspicions roused, Jimmy went to the Motts’ to hunt for Bette and Dot...and Dandy, meanwhile, having read Dot’s less-than-flattering diary entries about him, has reverted to stab-happy mode and seems to think Jimmy’d make a good third victim. DAMMIT, GLORIA, DO SOMETHING! You’re the Angel of Death! Or you will be in twelve years.
Posted by Dang-Blasted at 12:01 PM