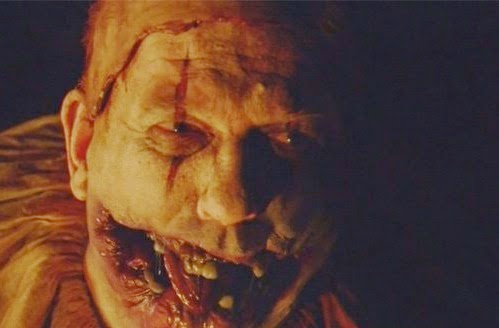 --When you wish upon a star, makes no difference who you are. Dreams do come true! In my case, I prayed for the return of Lily Rabe and my prayers have been answered! She’ll pop up later in Freak Show...as one of my all-time favorite AHS characters, Sister Eunice, demon-possessed nun extraordinaire! Of course, this is twelve years before Asylum so she’ll be very young and demon-free, but still, I’ll take it. I’m delighted!

--Nothing in this episode was quite as exciting. It was quite a good ep, but I figured out most of what was gonna happen before it happened. Yes, in retrospect, Twisty the clown wasn’t the type of character who could carry an entire season, despite his visual creepiness. As for Edward Mordrake, he worked better as an idea than a realized character. The demonface was well-done and Wes Bentley played the role gamely enough, but Mordrake was basically just an Exposition-o-Matic, making various folks cough up their tales o’ woe. A lot of our cast had the week off, as the ep focused in on two key players. After some angsty backstory from Paul the Illustrated Seal and Legless Suzi (summary: it ain’t easy to be lacking limbs in the days before political correctness), Mordrake returned to visit Elsa in her tent.

--You see, Jimmy and Esmerelda had earlier found themselves on slasher movie turf when Jimmy’s bike broke down and they witnessed Twisty snatching Bonnie after another failed escape attempt. Jimmy wanted to stumble to the rescue, and succeeded in getting conked on the head by Twisty’s new protégé, Dandy, who promptly presided over a makeshift magic show in which he prepared to saw Esmerelda in half. Because Jimmy is badass and Dandy is a pussy, Jimmy broke his bonds and returned the conk-on-the-head favor. Esmerelda distracted Dandy and led Bonnie, Corey, and Asshole Teenage Dude to safety. Twisty re-conked Jimmy, but before bad things could happen to our dreamy greaser...Mordrake cometh.

--Yes, as the showrunners hinted, Twisty’s tale actually made us feel sorry for the big lug. You see, Twisty is a Good Clown. All he wants is to be a Good Clown. He took off his mask and forced painful words through the gaping wound where his mouth used to be. Short version: he’s Arseface! Simpleminded, with a guileless love of children, Twisty was a star carnival attraction in 1943. Jealous of his success, the freaks drove Twisty away and spread the rumor that he diddled the kiddies. Homeless, desperate, Twisty moved into his Dharma van and tried building and selling toys from junk, but only succeeded in freaking people out. So Twisty put a shotgun in his mouth and pulled the trigger...and only succeeded in mutilating himself. When did his poor brain snap? Was he always going to turn to murder, or was he a genuinely sweet soul who was kicked in the balls so hard by Fate that murder became his sole default? The important thing is that all of Twisty’s actions spring from his pitiful need to be a Good Clown...and his story contained enough pathos to make Mordrake’s worse half weep. Thus, Mordrake ended Twisty’s luckless life. From hiding, Jimmy watched as the ghost of Twisty, healed and whole, joined Mordrake’s undead posse....forever. #RIPTwisty

--So Twisty was just the opening act, after all. The real showpiece of villainy? Dandy, of course, and can I just say that Finn Wittrock has one of the most unpleasant grins I have ever seen. But it serves him well. He found Twisty’s body, claimed his mouth mask, and returned home for take two of terrorizing Dora with a knife. Dora still wasn’t having it, but this time, to no one’s surprise, Dandy summoned up the psycho clown moxie he needed and slashed Dora’s throat. And then he giggled like a merry schoolboy. Is Gloria going to do the right thing and toss her nutjob son in an asylum? Heh. What do you think? (No. You should be thinking no.)

--Despite the ominous Dandy developments, things ended on a surprising note of joy for Elsa’s troupe. After all, Jimmy and Esmerelda just exposed the serial killer and saved three kids. A swarm of townies arrived at the demon-mouth gates of the freak show...to say thank you. To meet the freaks as people. To be paying customers. Jimmy was uncertain, but it looks like being a hero is good for his complexion. Yep, everyone was happy...except Bette and Dot, who are now more sidelined than ever. Hate to say it, but those two are becoming the Zoe of Freak Show: important only at the beginning, to mislead us. Oh, and another ominous note: Esmerelda’s male partner strolled in and introduced himself as “Richard Spencer,” a Hollywood talent scout, which almost made Elsa sploosh on the spot. And she hasn’t even seen his mighty phallus of thunder! I’ll call him Spencer for now, but I hope his plans to cram a murdered freak in a pickle jar come to naught. I’m really committed to these oddballs!
Posted by Dang-Blasted at 4:29 PM