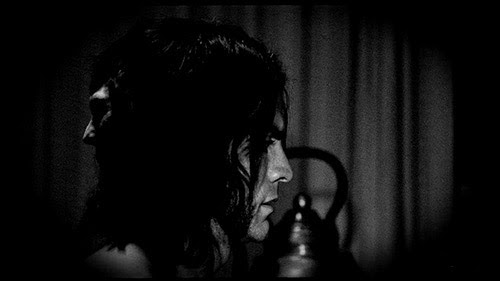 --Let the record show that it took this season of AHS three episodes to introduce all its main characters. I still feel like things are getting overcrowded on this show, but luckily, nothing has felt wasted yet. YET. It’s time for a beloved annual tradition, the two-part, subplot-packed, Halloween-themed WTF-a-thon. But even now, Freak Show is keeping things to a steady pace and not flipping its shit too badly, which, again, means it’s outdoing Coven. Yay!

--If there’s one subplot that may turn out to be pointless filler, it’s The Tale of the Two-Bit Con Artists. We’ve got Denis O’Hare and Emma Roberts as a pair of identity-swapping shysters who were first seen trying to sell a “baby Sasquatch” to an oddity museum. Didn’t work, but the curator did admit she’d pay big bucks for something real. Off went our wannabe villains to Florida where the female half presented herself as a fortune teller named Esmerelda and floored Jimmy with her cherry-red smile. During her audition with Elsa, Esmerelda pulled a Keyser Soze, scanned the room for clues, gazed into her crystal ball, and demonstrated that weak-minded people will find meaning in the vaguest of images, especially if they’re hopped up on opium. Now Esmerelda’s gained access to the heart of freakdom, but isn’t quite sure she’s up for murder. Her male counterpart, meanwhile, is frolicking with a viking-helmet-clad hunk in a hotel room, and apparently possesses an organ of alarming dimensions, which makes him...a bit of a freak? Real men know that it’s not what you got, it’s how you use it.

--The biggest story this week was The Tale of the Bearded Lady and Her Many Misfortunes. Yes, spotlight on Ethel, who was informed by a kindly doctor that she’s dying of cirrhosis (that scene reminded us, not that we’d ever forget, that Kathy Bates is amazing). Rather than swear off booze, she dove back into the bottle with gusto, but that did lead to some quasi-reconciliation with Dell, who does kinda sorta regret being such a shitty father to Jimmy. Dell’s got a different health problem that is fatal only to his machismo: his candle keeps melting, and Desiree is getting fed up. Ah, yes, the most manly men are always the most insecure. Seriously, male frailty was a huge theme this week; we also saw it in...

--The Tale of the Bored Little Rich Asshole. Gloria tried to set up an awesome in-home Halloween party for Dandy, but failed wretchedly, as you’d expect from a woman who named her son “Dandy.” Infuriated (“HOWDY DOODY???!!!”), Dandy made himself a clown costume and soon was prowling the halls in a scene that paid cheerful homage to the most famous Halloween film of them all...Halloween. Sadly for Dandy, his “victim” was Dora the maid (I called her Nora last week but I guess I misheard), who’s way too badass to be intimidated by a whiny little bitch with a kitchen knife and a Bozo mask. So Dandy went to the Dharma van to bully some proper victims and Twisty, meanwhile, abducted an annoying teenage dude who totally deserves whatever clown-themed agonies he’s about to endure. Dora’s so cool. And so doomed. But death’s better than a Woody Woodpecker costume.

--Over in The Tale of the Very Close Sisters, we saw Bette and Dot about to get surgically separated, a bit of deliberately misleading trailer bait that was actually a dream both sisters were having. Thing is, Dot is all but sharpening the scalpels to excise her untalented sister, which will mean death for Bette. Dot thinks Jimmy is her man, but we all know he’s got his eye on Esmerelda, so that’s no good. Speaking of Esmerelda, she randomly made up some crap about a tall, dark, aristocratic gentleman, and unluckily for everyone involved, that happens to be a spot-on description of this week’s eponymous character...

--The Tale of Edward Mordrake, and the reason freaks won’t perform on Halloween. Ethel laid down the backstory: Mordrake (Wes Bentley) was a British noble prevented from happiness by the teensy fact that he had a demonic face on the back of his head, a face which whispered the most horrid things to him, day and night. Ultimately, Mordrake was committed to an asylum, but what Wikipedia leaves out is that he escaped and joined a freak show. And then he murdered all the freaks and hung himself. And if you perform on Halloween, Mordrake will appear and claim a new member of his undead troupe. Elsa called bullshit on that, or maybe she figured an undead Voldemort-faced fanboy is still a fanboy; she got right up on stage for a “rehearsal,” belted out some Lana Del Rey (why the hell not?), and sure enough, Mordrake appeared, ushered in by a cheesy green fog that only this show could pull off. But Mordrake wasn’t much interested in Elsa...

--Nope, he had his two sets of eyes on Ethel. When he visited her in her trailer, it was truly the battle of the awesome fake accents, with Bentley’s “Pahdon me, meddem” more than a match for Bates’ “Dewn’t knew whuuut’s goooin’ awwn!” As apologetic as you’d expect from a well-bred man, Mordrake asked Ethel for some exposition, and boy, did we get it: Ethel’s early, successful Vaudeville days; her relationship with Dell; her utterly failed attempt to do Shakespeare in Europe; and the ultimate shame: Dell turning the birth of Jimmy into a sleazy live event, just to make a bit of dough. Poor, poor, poor Ethel. With the life she’s had, no wonder she kinda started thinking she was ready to be spirited away by Mordrake. But his demonface said no. Ethel’s not the one. But...someone’s soul must be hoovered up by Mordrake on this Halloween night. Whose?

--Silly monkey, that information is for next week. Believe me, I’m as curious as you are.
Posted by Dang-Blasted at 9:52 AM