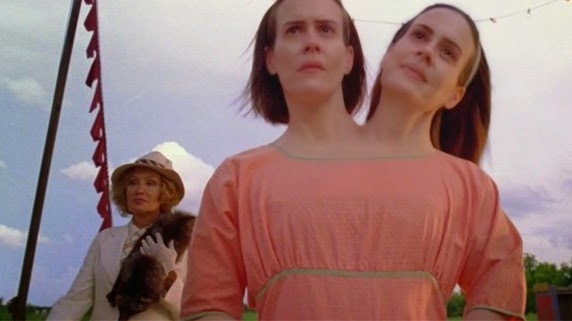 --Deah dah-ry, today I finally got to watch the season premiere of American Horror Story after being delayed by the fact that I was selfishly having fun on vacation. How dare I. This show has been haunting my dreams. As in, I am quite literally having dreams about Freak Show before I’ve even seen it. And now I have seen it, and I already like it better than Coven, which is saying something as Coven was a blast and a half. But it was also somewhat juvenile, and so far, Freak Show seems awfully...mature.

--Yes, mature. In an episode where a man uses his deformed flipper hands to pleasure housewives. There was something very understated about this premiere; it moved at a fairly sedate pace, it took its time establishing time and place, and although the expected fisheye lenses and off-kilter editing were present, they neither dominated nor distracted. Hell, check out that opening shot. Wanna hook your loyal viewers? Begin the season with an extended close-up of Sarah Paulson looking haunted. Gadzooks, what horrible things are gonna happen to her this year? Oh, I can only speculate.

--Outstanding opening credits, as usual. This time around, we’re given eerie calliope moans over the main theme, and a stop-motion promenade of clown dolls, deformed skeletons, knife-throwers, you name it. Meanwhile, the names of ten cast members are crammed in, the largest role call yet. Kinda crossing my fingers that the next season dials back the sheer number of peeps. I mean, I get it, once you snag a really awesome actor, you don’t want to let them go. But it’s tough to keep track of all the names while distracted by masturbating skeletons. Hey, but there’s Angela Bassett! ONE non-white person has made it onto the main cast of AHS! Bravooooooooo.

--Back to Sarah Paulson, or should I say, Sarah Paulsons. The episode thankfully didn’t rush its main plot. An old woman is murdered. Some...entity...is discovered in her house and locked up in the secure wing of the hospital. In waltzes Jessica Lange, sporting an amazing wardrobe and a smooth-as-toffee German drawl, to sweet-talk her way into viewing the patient. Patients. Meet our kinda-sorta audience analogue, Bette and Dot Tattler, conjoined twins who mostly share one body. Leftie Bette is childlike, trusting, and enamored with the silver screen; rightie Dot is harsh and suspicious. And they can communicate telepathically with each other, which barely seems farfetched. Divine acting by Paulson as always, although the special effects work is fairly obvious (notice how, whenever we see Bette and Dot in close-up, they’re very immobile). Lange’s character, Elsa Mars, coerced the twins into working for her, using a mix of flattery and blackmail (Bette murdered Mommy! Oops!). And what is Elsa’s profession?

--Back up. It’s 1952 and we’re in Jupiter, Florida. Everything is pastel-shaded. Elsa presides over a “cabinet of curiosities,” a ragtag jumble of tents occupying some poor rube’s field. Plenty of freaks to be had here! We’ve got tiny people, limbless people, a very tall lady, a British guy with Thalidomide arms. My beloved Pepper the pinhead is back, and she’s got a boyfriend! And this implies that Freak Show and Asylum take place in the same universe! Which is weird! But whatevs. Bette is delighted to exist in such a glitzy realm, while Dot is horrified and disgusted. But Dot’s got an eye for the handsome Jimmy Darling (Evan Peters), a syndactyl greaser who...well, let’s just say that if they made a silicone model of his flipper hand, bored June Cleavers everywhere would be saving up their allowance money. Jimmy’s mother, Ethel (Kathy Bates), is a bearded lady with a vowel-choked Baltimore accent who serves as Elsa’s right hand. The Tattler twins will hopefully inject new life into the freak show and bring in the crowds!

--Enter the Motts. Wealthy, snobby, clueless. Gloria Mott (Frances Conroy Frances Conroy Frances Conroy) is a condescending bourgeois who smothers her unhappy, entitled teenage son, Dandy (Finn Wittrock). They bought out the whole show and took in Elsa’s bedazzling, anachronistic cover of “Life On Mars.” Delighted by the freaks, Dandy asked his mommy to offer up thousands of bucks for the Tattler sisters, but Elsa told the Motts to take a hike. They’ll be back. And my wish about Frances Conroy being a villain? On its way to coming true. I definitely plan to punctuate everything Gloria does by pointing out that this woman actually named her son “Dandy.” I just hope we’re not gonna be as hung up on mommy issues as last season.

--I’m also glad to see Evan Peters returning to villainy! Kind of. Jimmy is fed up with the freak show and thinks the performers should strike out on their own. He rejects Elsa’s belief that for the unusual and deformed, a freak show is the best they can hope for in the cruel, judgmental world of 1952. She’s right, and he’s right. However, when a bigoted police detective showed up to arrest Bette and Dot on suspicion of murder, Jimmy murdered him, then led his fellow freaks in dismembering the body. Now, was that justified? The detective admitted that Bette and Dot’s freakishness would ensure a guilty verdict and close the case. On the other hand, Bette and Dot really did kill their mother. Is Jimmy’s jingoism going to save the freaks’ asses when the chips are down, or will it land them in unspeakable peril? I’m already predicting this season is not going to have a happy ending.

--And then, of course...that fucking clown. Bette and Dot are suspected of multiple murders, but we know who the real culprit is. It’s a tall, hefty man in a stained clown suit and wig, a ghastly grinning mask covering his real mouth. He doesn’t speak. His first appearance, distantly emerging from some shrubbery in broad daylight, was somehow way scarier than if he’d jumped out of a dark corner. He’s prone to berserker rage and stabbing the fuck out of people, but he’s also a showman, and he currently has a teenage blonde and a young boy locked up in his abandoned Dharma van of horror, where he is subjecting them to balloon animals. He’s also lurking at the edges of Elsa’s tent city. What are his motivations, if any? What’s his backstory? What’s under the mask? I can confirm that his name is Twisty and he’s played by John Carroll Lynch, the freaking Zodiac Killer. Further revelations await.

--The final revelation in this particular ep concerned Elsa, who is torn between protectiveness toward her freaks and a selfish desire to hog the spotlight and gain some showbiz glory. Is she merely a faded star, an aging Sally Bowles? Well, yes, but it’s more than that. The final scene shed light on Elsa’s easily wounded ego by revealing that she’s a freak herself: below the knee, her legs are prosthetic. Accident or birth defect? We shall find out. It was a sad and understated ending to a surprisingly restrained episode. Well, restrained by the standards of American Horror Story. But I am delighted by this tonal shift and hungry for the next act. I mean, half the people on the main cast list haven’t even appeared yet.

--Possibilities for what’s under Twisty’s mask: a lamprey mouth. A hole clean through his head. A smaller version of him, fused to his lips. Spider fangs. A giant sphincter. A mouth that opens sideways. The Fiji Mermaid. A really bad harelip. Do-it-yourself orthodontia. Eyeballs. A glorious handlebar mustache. Bees. A speakerphone. Tentacles. A gumball dispenser. Massive novelty dentures. Herpes. A Polish sausage where his tongue should be. Any more ideas?
Posted by Dang-Blasted at 8:08 PM