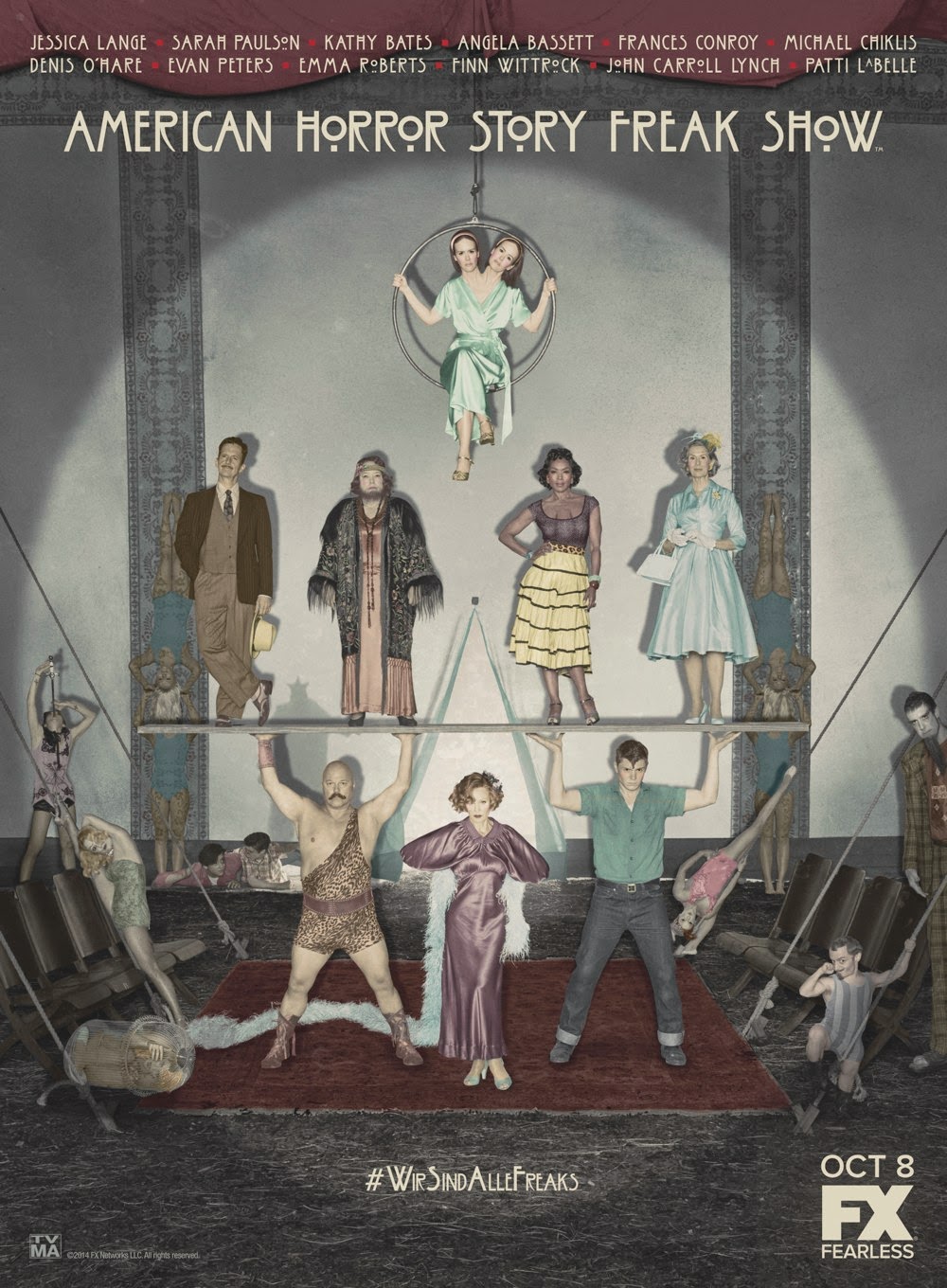 Hoo boy. The more I hear about Season Four of American Horror Story, the happier I get. Viewers may know that this show kinda takes over my blog while it’s airing, as I feel compelled to recap each episode in a manner that is apparently super-passé (RIP, Television Without Pity). The new season, Freak Show, begins its assault on our senses in early October, but let’s do a brief warm-up.

I’m not gonna unpack the plot too much, because I’ll be doing that in the recaps. Freak Show is set in Jupiter, FL, in the year 1952. The titular cavalcade of weirdos rolls into town, owned and operated by a German expat played by the ever-glorious Jessica Lange. Horror ensues. There’s a love triangle involving a bearded lady, a strongman, and a woman with three boobs. The main villain is a psycho killer clown. Tons of familiar faces from last season are back, for better or worse. Since I myself work for a circus, this is all extra-delightful to me. I’m also amused by the fact that AHS is no longer trying to pretend it’s not X-Men. Seriously. It’s doing the exact same “gaggle of outcasts with strange individual abilities” schtick from last season, and the first episode is even called “Monsters Among Us.” Subtle. I think what I’m gonna do here is lay down a wish list of things I hope from Freak Show. I hope...

I hope it won’t just be Coven again.

Depending on who you ask, AHS: Coven, with its kooky humor and unfocused tangle of subplots, was either a fun blast or the worst thing this show has ever inflicted on us. I’m pretty much in the first category, because I like that AHS does something different each year. Thus, I’m concerned they won’t. With a couple exceptions, every major player from Coven is also in Freak Show, and as I said, the X-Men vibe is still strong. I enjoyed the heck out of Coven but I don’t want its aesthetic to become the norm. Otherwise folks will abandon this show in a blink.

I hope it will be scary. For real.

Coven wasn’t scary. Like, ever. Previous seasons have had some nicely horrific sequences. I want Freak Show to actually terrify me. It looks promising. I’m not afraid of clowns but this particular clown (played by John Carroll Lynch) has great potential and, from the sound of it, might be horribly deformed or something. Also, Wes Bentley is going to play a guy with a whispering face on the back of his head. Just writing that made me shudder a bit. Freak Show could be the scariest season yet, IF they don’t chicken out.

Yep. She’s back. Haters, commence whining. For the record, I liked her in Coven because she nailed that particular character (bitchy diva), but I get the sense she’s a one-trick pony. The showrunners should force her to stretch a bit, play outside her comfort zone. Maybe then I’ll respect her for more than her ability to be sleeping with Evan Peters. Speaking of which...

I hope Evan Peters gets an actual fucking role.

I have ranted and moaned so much about this, but it holds true: the past two seasons of AHS were really unkind to Evan Peters. The guy has great acting ability, but he’s been stuck playing an overly derpy nice guy and a slackjawed, dialogue-free zombie, in that order. In Freak Show, he’s the son of the strongman and the bearded lady, and he has flipper hands. And that is all we know. For the love of God, make him interesting and compelling. PLEASE. You’re doing nobody any favors by wasting one of your most valuable actors.

I hope Frances Conroy is a bad guy.

She’s always amazing on this show, and she’s always played characters of intriguing moral ambiguity. What I would love is for her to play a straight-up villain. She’d absolutely slay it. Her Freak Show role is of a wealthy lady whose son wants to run away and join the freaks. Unless she’s way more liberal-minded than your average 1950s socialite, things are looking up.

Sarah Paulson is incredible. She can act circles around half her castmates. In Freak Show, she plays a pair of conjoined twins with presumably clashing personalities. That is freaking awesome and could be an acting tour de force for Paulson, who needed an Emmy, like, ages ago. I have two worries: A) the special effects will be crappy, and/or B) they’ll kill off one twin early to save on the SFX budget. That would piss me off. Don’t tease us with story-related promises you don’t keep.

I hope for Lily Rabe.

I am bummed, bummed, that Lily Rabe isn’t in Freak Show. She’s one of their MVPs and has been brilliant in all three previous seasons. This year, she’s off doing some alien-invasion show and almost but not quite appearing in the next Hunger Games. I miss her already. BUT, it’s not inconceivable for her to return later in the season for a guest role. I mean, no one knew that Dylan McDermott was gonna pop up in AHS: Asylum, did they? I’d squeal with delight if they got Rabe back, even for just an episode or two.

I hope they take a break from the supernatural.

Freaks aside, it’s looking like this season may be light on ghosts, monsters, magic, and such. And I’m okay with that. Some of this show’s strongest material has dealt with simple human evil, which can be way scarier than whether or not aliens abducted your sexy wife. I’d enjoy a less out-there season, and how about having dead people ACTUALLY STAY DEAD? Seriously, Coven lost all its stakes when it pulled a Phoenix Down on a deceased character for the five thousandth fucking time. I want stakes. I want to fear for the characters, and feel like the plot could actually have happened. I want less Voldemort and more Dolores Umbridge. You know?

I’m excited. No matter what, this should be a delight. Of course, I’m gonna be on vacation during the season premiere (first world problems!), but maybe I can snatch some time to see it and recap. If not, better late than never. Stay tuned...the creepy calliope music is playing and the curtain is about to open...
Posted by Dang-Blasted at 2:43 PM