To Squee Or Not to Squee: Guardians of the Galaxy 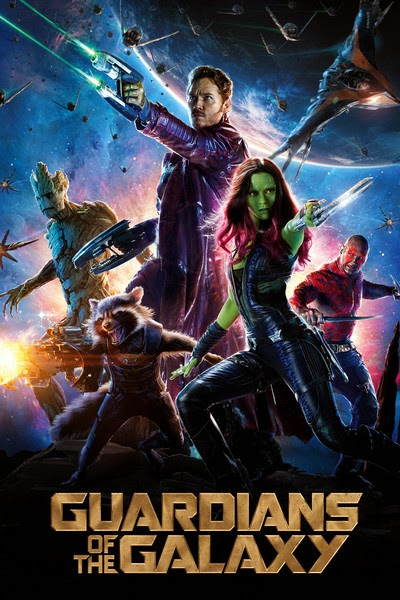 Let me preface this by stating that during Summer Blockbuster Season 2014, I went with all the weirdo options. I already talked about X-Men: Days of Future Past, which is way weirder than most superhero franchises when you think about it. After that came the excellent Snowpiercer with its offbeat postapocalyptic chic, and Lucy, in which Scarlett Johansson unlocks Godmode in the video game of life and turns omnipotent with the assistance of Morgan Freeman and stock footage. Hell, even the new TMNT (which I avoided like a bag of angry spiders) is pretty bizarre, albeit in all the wrong ways. If it was the Summer of Weird, then Guardians of the Galaxy was the cumulative jewel in the diadem, and I loved the movie, really I did. What turned out to be most weird was how something this off-the-beaten-path can still slot so neatly into the predictable safety of the Marvel machinery. Which ain’t an awful thing, just...a thing.

The Marvelverse is a happening place nowadays, to the point where I won’t be able to watch Captain America 3 without wishing we were on some other planet or realm or plane where all the real action is. Pretty much every shot in Guardians contains something cool to look at, and the sci-fi setting, coupled with the carefully tailored kookiness (Terry Gilliam visuals are now a bankable default mode), make it different from anything seen before. It’s all the snarky one-liners and strange little side details in all the previous Marvel flicks, brought to front and center. Odd, then, that it opens with tragedy worthy of Up, as a young boy named Peter Quill loses his mom to cancer. As if that weren’t enough, he gets kidnapped by aliens for...some reason. (Hint: if you’re the only Human in the galaxy to get yoinked off Planet Earth, it probably ain’t a coincidence.) Some years later, Quill (Chris Pratt) is a swaggery space pirate so blasé that he backstabs his own pirate buddies with hardly a shrug. “Starlord” is the name given to him by himself and absolutely no one else. Pay attention, though, because his flippant manner hides deep hurt, and the way in which he clings to 80s-era Earth pop culture is at first funny, then poignant.

“Starlord” finds himself in possession of the thing that every Marvel movie has, the Glowy Object That Can Destroy Us All (GOTCDUA), and a lot of people want the latest GOTCDUA (this one’s purple!), including evil alien zealot Ronan the Accuser (Lee Pace, not that you’d know under the Goth Vader makeup), who wants to...oh, who cares what Ronan’s motivation is? He’s evil and he wants to kill everybody and he’s boring, thus making him the distilled essence of Marvel movie villainy. The collision of parties interested in the GOTCDUA results in Quill meeting his new future teammates, which include the assassin Gamora (Zoe Saldana), an alleged villainess who’s itching to switch sides; Drax (Dave Bautista), a vengeful bruiser whose lack of personality is his personality; Rocket (voice of Bradley Cooper) a pissed-off raccoon with a gun fetish; and Groot (voice of Vin Diesel), a walking tree who functions like a sylvan Swiss army knife. The movie keeps emphasizing how UNCONVENTIONAL and UNHEROIC and RAGTAG these heroes are, how they AREN’T LIKE THE AVENGERS. Only they totally are, because the fuck-the-rest-of-you misfit nature of the Avengers was played up just as much, remember, guys? 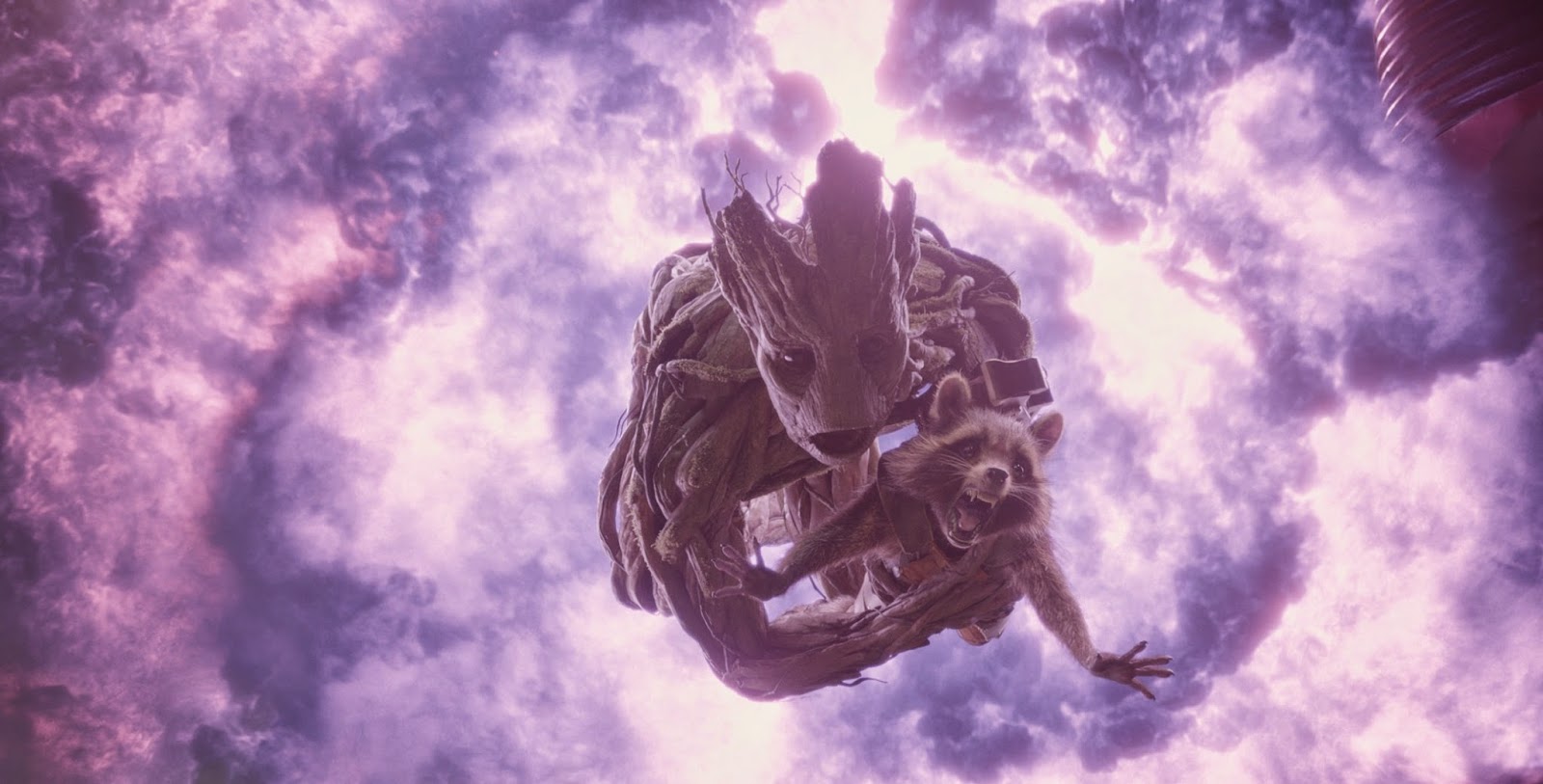 What I’m saying is that the anarchy of Guardians is manufactured. I still really loved it. It was very funny, though it got a bit too self-referential at times. (There is more to humor than just pointing out cliches as they occur.) It’s got a juicy mean streak: more people die in this film than in all the previous Marvelverse films put together, and probably all the future ones as well, at least until Guardians 2. The action is a lot of fun, too -- the first “meeting” between all our heroes is a street brawl in which they find ever-new ways to injure each other, and during one space battle, the Guardians use their own ships as pinballs of death. And, again, the film never loses track of the fact that these weirdos have wounded souls. Peter Quill, Gamora, Rocket, Drax -- all use a devil-may-care nature to mask the hurt that was done to them in the past, and their gradual cooperation comes through unspoken acknowledgment of that shared trauma (well, except for Groot, but who knows, maybe he had a horrible childhood encounter with Chestnut Blight or something). I wish the film had been more about what drives its heroes and less about the usual Marvel plot in which an uninspired evildoer uses the GOTCDUA (that’s three Infinity Stones out of six! Are you keeping track?) to be evil because he is not yet quite evil enough. Oh, yeah, and we see more of former post-credits teases Thanos (Josh Brolin...I think) and The Collector (Benicio del Toro), just enough to make us wonder if either one of them serves a point. 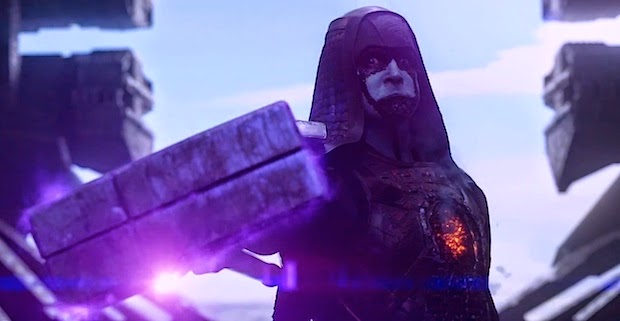 It’s all part of the Grand Marvel Movie Plan that may never entirely end. Will our Avengers and/or Guardians ever make it all the way to Thanos, and by the time they do, will anyone still care? Watch yourself, Marvel: you’re riding high, but cinematic trends change over time. The optimistic side of me would like the more bizarro Guardians of the Galaxy vibe to kick off a new movement, just as the original Iron Man kicked off the trend of superhero flicks as interlocking, irreverent, mythological spectacles. This franchise is evolving into all kinds of strange new forms, but for now, the firm hand of of the studio is on the tiller, making sure the core formula remains intact. Guardians didn’t really break the mold; it merely offered a hint that there’s more beyond the known horizon. And that an angry talking raccoon can make you cry. And that the funniest character is the one with no sense of humor. And that Djimon Hounsou is being utterly wasted by Hollywood. And that blue-skinned space redneck Michael Rooker has a whistle-powered harpoon. And that I was able to write the previous sentence at all, which is really all I can ask for as a blogger.

And the post-credits tease...really, guys? Really? I guess it was inevitable. But Guardians of the Galaxy 2 is already shaping up to be even weirder. Exxxxxcellent.

VERDICT: A Marvel squee, which is a squee with an asterisk next to it and a footnote underneath that reads, “You already know everything that happens in this movie.” But squee anyway. 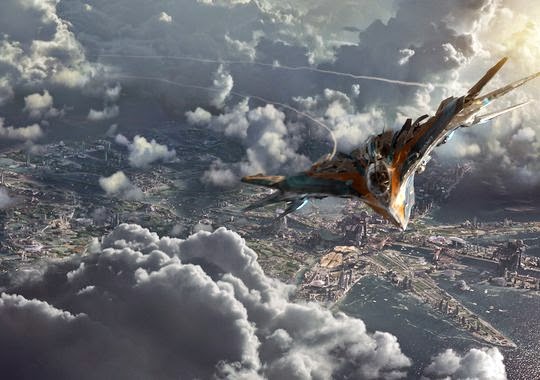