To Squee Or Not to Squee: X-Men DOFP 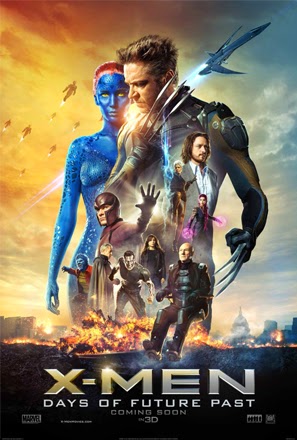 How about those X-Men movies? Talk about a ragamuffin franchise. The appearance of a new mutant-em-up from our friends at 20th Century Fox is always, always cause for cautious enthusiasm. Well, unless you’re someone like my boyfriend, who grew up with the X-Men comics and hates the films for utterly disregarding the source material. I can’t argue with that. And now that we know what really good superhero movies look like, it’s even tougher for the X-Men to display cred. Ranking the previous X-flicks in chronological order, we get: mediocre, pretty damn good, shitty, shitty, pretty damn good, and acceptable. Now here comes Days of Future Past, which faces a massive cast and continuity that’s been put through a wood chipper. It could have failed. Some might say it should have failed.

It doesn’t. And I like these movies, warts and all, so I get to breathe a sigh of relief. Days is deeply, deeply efficient. It gets the job done. It’s fun and exciting with a good dose of humor and some tragedy, and, most impressively, it wrangles a smidgen of sense from the retcons that have gone before. Original director Bryan Singer is very welcome; he kickstarted this nonsense and now he brings the saga full circle, drawing heavily from the well-received X-Men: First Class to give us more inspired retro shenanigans, and also juggling the various mutants cramming the screen.

About that. One of the big problems with the two shitty entries, X-Men 3: The Last Stand and X-Men Origins: Wolverine, was the character bloat. Every beloved X-person had to turn up somewhere, and were generally reduced to doing tricks for thirty seconds like a glorified trading card. Days of Future Past appears horribly swollen, with Wolverine, Professor X, Magneto, Young Prof. X, Young Magneto, Mystique, Storm, Quicksilver, Beast, Shadowcat, Iceman, Colossus, Havoc, Bishop, Sunspot, Blink, Warpath, Toad, and Apocalypse. (Don’t accuse me of spoiling that last one; we all know the next film’s title.) And, yes, a lot of these rubes have mere glorified cameos. Halle Berry’s Storm, for instance, is in the movie just enough for brand name recognition. But as a demo reel of cool powers, Days excels. If I ever get one chance to be in a movie, I might like to play one of the less important X-Men. Y’know, just look really badass and say one or two lines and call it a day. Sign me up for some future sequel as, I dunno, Douglock or something.

There is a plot, a tangled plot indeed, one which, we realize, the entire series has been building toward. In the near future, Earth is fucked all to shit, thanks to the Sentinels -- dragon-skinned androids programmed to hunt and kill mutants, who have long since grown out of control. They can shapeshift to adapt to their enemies, and if that seems familiar, it’s because the Sentinels were conceived from the DNA of Mystique (Jennifer Lawrence), who was experimented on and tortured following her assassination of the Sentinels’ creator, Bolivar Trask (Peter Dinklage), in 1973. A last, desperate collective of mutants hides out in a remote monastery, where the aging Prof. Xavier (Patrick Stewart) and Magneto (Ian McKellen), now mournful allies, hatch a plan. Shadowcat (Ellen Page), the girl who walks through walls, can also send people’s conscious minds back in time, for.......some reason. If she could send someone back far enough, they could occupy their younger self and alter history, stopping Mystique. The only person whose mind is durable enough is everyone’s favorite cigar-fellating Canadian wild card, Wolverine (Hugh Jackman). So back he goes, back to the end of the Vietnam War, where he must recruit the young Xavier and Magneto as backup. Problem is, the former (James McAvoy) is an embittered drunk who has erased his own powers with drugs, and the latter (Michael Fassbender) is imprisoned deep below the Pentagon for a crime I shall not reveal. Bolivar Trask, meanwhile, is a Mengele-esque bastard who’s prodding President Nixon to approve his killer robot army, and the angry, off-the-rails Mystique is closing in.

It’s easy to predict a lot of what happens. Will Xavier angrily refuse to help, then change his mind after a moment of self-reflection? Does Magneto have a sinister ulterior motive? Will Wolverine suffer a near-pornographic level of bodily harm? Duh. Despite the fact that there’s really nothing new going on in this film, Singer injects much style into the storyline, cutting between the 1970s and the grim, torchlit future as time runs out for both groups of mutants. By keeping the 70s bunch fairly small, Singer gets us to care about them, and also provides an explanation for why certain mutants from First Class are nowhere to be found. Actually, I was impressed by how much was explained. Mystique’s inhumane ordeal at the hands of the government neatly encapsulates how she went from smiling, vivacious Jennifer Lawrence to cold, aloof Rebecca Romijin. The entire franchise gains more import once we know that the Sentinels and their bleak holocaust were brewing behind the scenes the whole time. By applying a heaping dose of ointment and bandages to the continuity, Days deserves praise.

Yeah, it’s not great, but it’s good. The actors take the material more seriously than it deserves. It’s so nice to see Jackman’s Wolverine make the full transition from selfish amnesiac creep to calm, mature hero/mentor. Poor Jennifer Lawrence, though -- her Mystique is mostly a tool of the plot, and after David O. Russell and Katniss Everdeen, we know how much better she warrants. But then Evan Peters sprints into the film, and strolls away with the film, as the super-speedy delinquent Quicksilver. Team Avengers has already lost that battle, unless Aaron Taylor-Johnson has more up his sleeve than I think. Peters’ playful role captures the giddy fun of being a superhero, even an outcast maligned by society. This is why nobody likes the new Spider-Man incarnation. Why Iron Man is our favorite Avenger. Because the best costumed crusaders don’t take themselves too seriously. The X-Men franchise soldiers on, heavily flawed but capable, breaking up its dark social commentary with scenes like Magneto lifting an entire football stadium, or Blink (Fan Bingbing) using her powers to turn a fight scene into a tense game of Portal. Moments that make us giggle at their superpowered audacity. That’s what it’s all about.

X-Men: Days of Future Past serves as a nice culmination of the series thus far. I can’t spoil the ending, but its implications are pretty significant. It feels like an ending. Of course, there’s a post-credits teaser, and it’s cryptic enough that a non-comic-book-devotee such as myself had to do a little research. But if the next film is more of the same, if we have retro chic and superpowered fireworks and more Quicksilver and a Gambit who isn’t a shoehorned afterthought played by franchise-murderer Taylor Kitsch...I’m there. I may be a little guilty about my fondness for this wonky series, but I’m there.

VERDICT: It ain’t great art, even by superhero flick standards, but it gets a respectable squee.