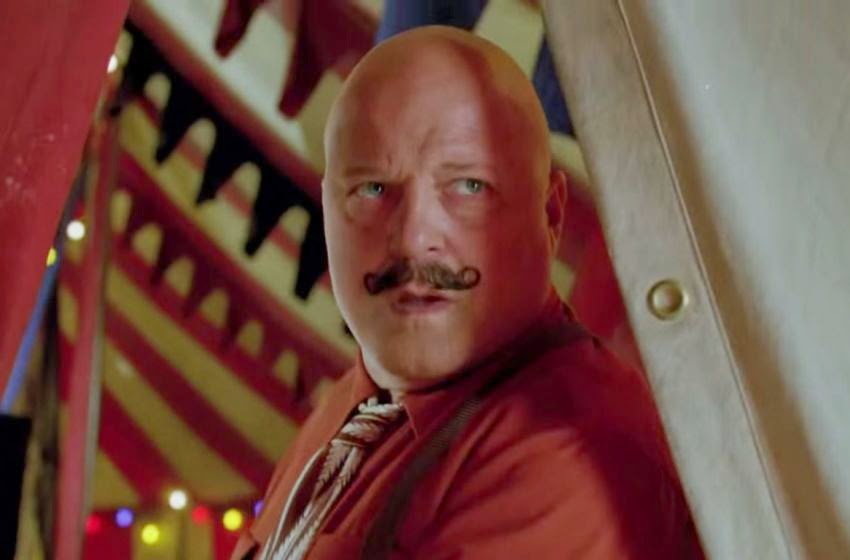 --Time to divulge something I may have mentioned before: for many summers now, I’ve worked for a circus. It’s a great job and I love it. My particular circus is a youth circus, so all the performers are teens. In general, these kids come from happy, middle-class homes and lead normal lives. Nonetheless, many of them have this sense of not quite fitting in, of seeking some damn thing from life that they can’t quite define, and that isn’t quite fulfilled by family or school. The circus gives them a conduit to something very particular and special that they might otherwise never discover. What I’m trying to say is that I can kind of relate to Dandy Mott. I mean, if he weren’t an annoying little psychopath.

--The ep began with a beautiful establishing shot of Elsa’s freak show, which was appropriate, since the freak show is the only place in this horror-verse that seems real. Think about it: we’ve never actually seen the town of Jupiter, Florida. There are interiors but no exteriors. The world outside Elsa’s little realm is a series of rooms, nothing more. Look at the Motts’ mansion: it’s like a giant-sized dollhouse that no real person could live in. The rooms are too big, yet still seem claustrophobic. The happy, loud, musical realness of the freak show makes it a haven. It’s everything to the performers, and it’s in terrible danger from so many directions. Unlike the hostile environments of the Murder House, Briarcliff Asylum, or Miss Robichaux’s School for Witches, this season’s main locale is a node of good karmic energy. And that’s why I fear for it.

--Jupiter is gripped by terror, the terror of suddenly realizing, “Hey, we’re all dumb as a bag of wood chips!” Seriously, when you’re all alone and you discover blood and/or dead bodies, you do not investigate, you GTFO. Twisty the clown continues his murder spree, which leads to a citywide curfew, which is bad biz for a freak show. Thanks to Jimmy’s murder of the cop, more cops are sniffing about, and Jimmy is torn by guilt and dread. His predicament gets worse with the arrival of Dell Toledo (Michael Chiklis), professional strongman and card-carrying macho asshole, who pleads with Elsa for work and then takes control with the effortlessness of a born alpha male. This pisses off Ethel, and no wonder: they have a history, and Dell is probably Jimmy’s father. Dell’s current squeeze, Desiree Dupree (Angela Bassett), is a female-slanted hermaphrodite with three boobs and the best of both worlds between her legs. I already love her, even though I have no idea what part she’ll play in the story. Dell’s solution to the curfew: just have matinees instead! What could possibly go wrong?

--I realize that, until now, I’ve never seen Frances Conroy play a stupid person. But unless there’s more to Gloria than meets the eye, she’s one dim bulb. She tries everything to penetrate her son’s petulant ennui, and when she spots Twisty wandering by the roadside, she hires him for a playdate. (It’s another blow against the Jupiterites’ intellect that they don’t run away shrieking at the sight of Twisty.) Dandy, meanwhile, believes he wants to join the freak show. It’s his true calling! Even though he has no skills whatsoever! Yeah, I feel the kid’s pain; too bad he’s legitimately crazy. Upon discovering Twisty’s true nature, Dandy was all like, “Neato!” and now he’s helping Twisty keep poor Bonnie and Corey locked up in his Dharma van. I’m really rooting for Bonnie (Skyler Samuels), who’s proven to be way more than a dumb blonde. Too bad she’s probably gonna die horribly. As you do.

--Bette and Dot struggled to find their place in the limelight, and made an ironic discovery. Starry-eyed Bette can’t sing for shit, while reluctant Dot has a voice so fine that she can...induce random blue-collar men into a spontaneous moshpit? Oooookay. Dell, a born huckster, quickly rewrote the show to showcase the Tattler twins and sideline Elsa. Elsa’s face clamped itself into a mask of cold fury, and now she’s conspiring with the jealous Bette to do bad things to Dot. My “one twin’s gonna die early” theory still holds, unfortunately. Elsa and Jimmy also conspired to overthrow Dell (who is wanted in Chicago for snapping a man’s neck) by planting the dead cop’s badge in Dell’s trailer. But Dell proved that he’s a smart macho thug and foiled their plan, and it was poor little Meep, the chicken-chomping gimp, who was arrested. Heartbroken, Jimmy decided to turn himself in, but it was too late, and the ep ended with Jimmy howling in grief over Meep’s battered corpse. See? I knew this season was gonna be tragic.

--So. Terrible events are being set in motion, as you’d expect from this show. We’ve glimpsed what’s under Twisty’s mask: it appears to be a gaping, diseased mouthhole, which is more predictable than I’d hoped, but I’m still eager for the clown’s backstory. We’ve also met the Motts’ maid, Nora (Patti LaBelle), whose facial expression says, “I am so the smartest person in the room.” Smart enough to unearth deadly secrets, perhaps. As for Dell, he seems like a villain, but I have a weird feeling he’ll be a redemptive character in the end. Of course, I thought that about Delphine LaLaurie as well, and all she did was disembowel more black people. Hmm.

--Best line of the episode was Gloria in her car: “Excuse me? Clowwwwwnnnn?” God, what a doofus. But then, she did name her son “Dandy.”
Posted by Dang-Blasted at 12:36 PM