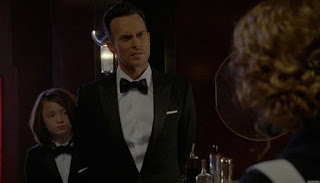 --I noticed something: the opening credits to Hotel read kinda funny in places if you combine the Ten Commandments with the actors’ names that follow. Thou Shalt Not Covet Cheyenne Jackson. Thou Shalt Not Steal with Angela Bassett. Thou Shalt Not Commit Adultery and Lady Gaga. The Countess needs committing, all right. Does Briarcliff do vampire fashionistas?

--Speaking of Cheyenne Jackson...plenty of this year’s cast drew short straws. I mean, Angela Bassett has been in like three episodes, and Sarah Paulson’s appearances are as sporadic as, well, a ghost. Poor Will Drake got it worst, though. Clueless to the end, serving as a mere plot monkey. And now he’s dead, I guess. Yeah, Hotel picked the least-surprising main cast member to eliminate (ghostly return pending), but that’s okay, because this episode contained lots of forward momentum leading into the winter hiatus. Everyone’s plotting against everyone else, but who will out-plot whom?

--The Countess is just royally pissed. Pissed at March for being responsible for a near-century of lonely misery. Pissed at Alex for creating non-Countess-approved vampire children. Pissed at Liz Taylor for taking the murder of his one true love so damn personally! Why’s everyone gotta be so butthurt? The Countess is done with not being entirely in control of the situation, so she pressed on with marrying Drake while turning Valentino and Natacha’s former prison hallway into...a prison hallway with a door. She also took back Donovan, who seemed smitten with her all over again. And she tracked down Valentino, who truly was delighted to have her back in his arms. Yeah, The Countess juggled three men this week, though Valentino’s the only one she cares a whit about, presumably. Miss Evers, forever friendzoned by March, popped up to deliver a snappy warning to Drake. No one escapes the Countess. Miss Evers promised she’d watch Drake die with a smile on her face. I don’t think I’ve seen a more gratuitous use of foreshadowing all year.

--Ramona’s such a weird character. She’s barely been around, yet the show has given her these huge, gristly lumps of backstory. It wouldn’t work if Bassett didn’t sell the bejeezus out of it. Ramona explained why it took her so long to plot revenge: she was busy with her parents, who took her in after her bloody fallout with The Countess. But then her mom died of cancer and her dad succumbed to Alzheimer’s. Withering away while Ramona remained helplessly immortal. She vampified her dad, hoping it would make him strong again, but a shattered brain is beyond even supernatural repair. All Ramona could do, in the end, was euthanize her father, which shocked her awake and ended her rather contrived twenty-year absence from revenge-seeking. Thank you for a flashback we didn’t really need, show, but I’ll forgive you because of who it focused on.

--I was worried the show would forget all about the newly-created vampire kids’ subplot. Nope! Alex found Max and his creepy little tribe in a house, feeding on pizza delivery guys and various other hapless adults. She tried to get them to follow her to the Cortez, but they refused to listen. Vampire tweens are no less stubborn and self-centered than normal tweens. I’m concerned for Alex -- she may be in The Countess’s crosshairs next.

--Drake was dumb. But Donovan is dumber. He lured Ramona into The Countess’s boudoir, promising that he’d drugged her into oblivion and Ramona could murder her with impunity. Double surprise! Donovan really is under The Countess’s thumb again! He tazed Ramona, who was soon crammed into one of those neon-lit gibbets in the prison hallway. Donovan’s such a fucking tool! God! Iris really needs to admit that her son is a banana slug, and move on with her fucking life. Go to Alaska or something. No sun; easy to murder peeps.

--And Drake? The Countess married him, with Liz Taylor as a pouty witness. Twoo wuv! But Drake’s bliss didn’t last long. March still seems beholden to The Countess despite her newfound loathing for him, and took Drake to see creepy little Bartholomew. He did not react like a proud stepfather. Then The Countess stuck Drake in the prison hallway, and when he freed Ramona from her cage, she showed her gratitude by eating him alive, while Miss Evers I-told-you-so’d and The Countess relished the whole thing via security cameras. RIP, Drake. When Lachlan learns of his dad’s death, I’m sure he’ll respond with the same stoned detachment as always. Kids these days. With their blood orgies and their stylish ennui. Right?

--The Countess’s plans are proceeding swimmingly, but I dunno about her luck lasting, because events on AHS can always execute a screeching hairpin turn. Liz could still be a threat. And although The Countess has a plan to get rid of the increasingly valley-girlish Natacha, she didn’t notice Donovan snooping on her visit to Valentino’s motel room. Man, The Countess just sucks at keeping her infidelities hidden. Maybe Donovan will be less of a tool now? I suspect that next week will not go well for The Countess. Should be fun! Bring popcorn and Swedish fish!
Posted by Dang-Blasted at 12:01 PM