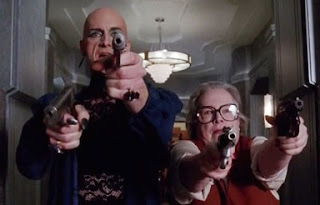 --Discussion question: Who is the “She” referred to above? It ain’t Ramona, not this week. And I’m afraid The Countess’s odyssey of petty vengeance has come to a screeching halt. Based on the final shot, that cliffhanger to end all cliffhangers, I guess it’s Liz Taylor. And I’m happy about that, and also happy because this was a FUCKING GREAT episode, full of good dialogue, powerful emotional moments, unpredictable plot turns, zingy one-liners, and the rich, meaty development of subplots. I feel gleefully gorged, and I should be able to last through the hiatus after this. But not without the screaming need to see what happens next! Wow!

--Death was inevitable, but who would be biting the bullet? Alas, alack. While The Countess was luring Natacha into her spider’s den, Donovan was paying Valentino a bitchy little visit. These two confrontations cut back and forth, boxing in our love quadrangle as it became a two-way street. Valentino dramatically brandished a scimitar...and Donovan shot him in the face. Natacha sexily rolled around with The Countess, then pulled a knife...and The Countess shot her in the face. This type of totally ghastly humor can only be given proper justice by AHS. The Countess then called the cops, all “Boo hoo, my husband is missing, woe betide me!”...before Will Drake strolled in, more than a little pissed. I love it! Maybe Drake won’t be a pointless character after all! Once he gets the hang of being a ghost, he can make life quite inconvenient for The Countess. OH, WAIT...

--What was the most disturbing story element this season? Well, it’s subtle, but my pick would be how Lowe and Alex have casually abandoned their daughter, and can barely muster any guilt. “We’re terrible parents,” Alex mumbled half-heartedly. Acknowledging your faults does not excuse them. Jesus! Lowe was fresh off his ninth kill, a trio of voodoo practitioners whose ears he sliced off (hello, AHS mythology shout-out!). Under threat from The Countess, Alex needed help to deal with the junior vampire brigade. Not sure why Alex and Lowe thought it’d be a good idea to stroll into their lair...but the sight of little Kimmy croaking from malnutrition was enough to make the kids follow the adults meekly into the Cortez. Whereupon Alex and Lowe locked them in the prison hallway, leaving them to rot just as they did to their own daughter. This nasty deed re-ignited their passion, and I love how conflicted I am about this! Alex and Lowe are scum, yet I want them to be happy together? Kind of? Anyway, Ramona now has her own mini-army and I can’t wait to see the payoff.

--And the most heartfelt Hotel tale? Liz Taylor’s. Talk about lumps in throats. After witnessing an elderly couple lovingly take their own lives, Liz decided to follow suit. No family, no Tristan, nothing to live for. Iris, raw from Donovan’s rejection, jumped aboard the suicide train. First, though, Liz wanted to reconnect with the son he abandoned decades ago. Which makes him a better person than Alex and Lowe, huh. This led to some outrageous material for Miss Evers, who is an absolute treasure. From her pronunciation of “Los Ang-hell-ays” to her referring to Liz as “the ghost of Theda Bara” to her joy at being bribed with a bottle of detergent and a fancy washer-dryer. I adore her. This season may be wasting some of its ladies, but it ain’t wasting Mare Winningham. She could be the new Frances Conroy. I don’t say that lightly.

--James March lit his building contractor on fire. It doesn’t have much to do with the plot, but it happened, so I may as well mention it.

--Liz nervously arranged a visit with his grown son, Douglas (Josh Braaten), who deserves a T-shirt: “I checked into the Cortez and somehow didn’t die horribly.” At first glance, Douglas seemed to embody the old Liz: a banal man with a hideously boring job and no lust for life. Liz couldn’t bear to reveal his true identity to Douglas...but he didn’t need to. After they’d talked and drank and bonded, Douglas revealed he’d known who Liz was the whole time. And his reaction made it clear he’s a fine, fine man. He didn’t gloss over Liz’s abandonment, nor did he hold a grudge. He is happy. He’s gonna start a kayak store in Boulder. And he wants Liz back in his life. The scenes between father and son were deeply poignant, vibrant with truth. Well done, show! Liz no longer wanted to end his life, and his newfound carpe diem was enough to convince Iris as well. Why, the two of them can turn the Cortez into more than just an outdated murder parlor! BUT FIRST...

--In a moment. We’ve gotten some very good payoffs on our subplots, but the tale of Sally remains dangling. No sooner had Lowe fallen back into bed with Alex than Sally appeared, wrathful and seductive. The drug, demanding that Lowe relapse. But Lowe found the strength to break free. After a joyous reunion with Holden, Lowe took his wife and son and proudly exited the Cortez, while Sally, unable to follow, screamed dire threats. All Lowe has to do is never return. But he will. One more bell jar needs filling with meaty tidbits. And Sally’s in the way. Guess which “She” wants revenge now?

--And thus we return to The Countess, the great mover and shaker of this season. Final(?) costume commentary: In the closing scene, she dressed all in black. Mourning her years of wasted time, her mistakes. After she learned what had become of Valentino, she returned to her penthouse to kill Donovan. And Donovan was okay with that, because he’d realized something: he’s just another Valentino. So was Tristan. So was Drake. All these dark-haired men with their swoon-inducing cheekbones, all The Countess’s attempt to craft a Pygmalion copy of her original beloved. She made Donovan everything he is, which makes him absolutely nothing. A shell. He fell to his knees before The Countess and asked her to kill him, and she gazed sorrowfully at the beautiful, hollow man she’d pretended to love. Who knows what she would have done. She didn’t get the chance. The penthouse door banged open and in charged Liz and Iris, brandishing two pistols apiece. They fired. Again and again and again and again and again. But we did not see where those bullets landed.

--I loved the episode. I love how good this show is when it takes the time. And while I wait, I demand to see all of Iris’s self-tribute video! That was perhaps the most hilarious, tragic, hilariously tragic thing I’ve seen all season. If this season has its finger on the pulse of modernity, then make that shit go viral! 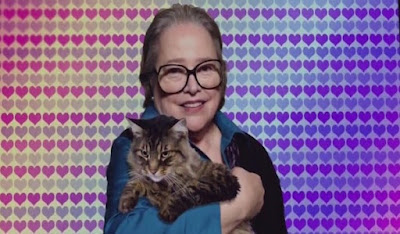