To Squee Or Not to Squee: Death Note 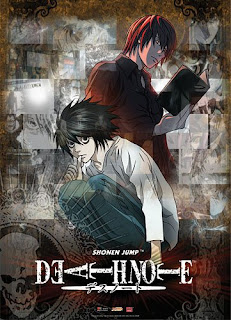 Long ago and far away, I stuck some old anime shows on a Cautious Enthusiasm list. I am delighted to say that after all this time...I have watched one of them. Oy.

“Anime as an Art Form.” That was the name of a program in my college dorm, and my first major exposure to weeaboos. Now, my own program was called “Sci-Fi, Fantasy, and Horror in the Arts,” so I’m not gonna say I was any less nerdy. But we, with our Dungeons & Dragons, our earnest discussions of Tolkien and Firefly, still kinda hated on the weeaboos. For those of you fortunate enough to not live entirely on the internet, a weeaboo is a white person who worships, idealizes, and emulates Japanese culture. They wore Rising Sun headbands. They addressed each other as “Ashley-chan” and “Jeff-san.” They turned up their noses at all things Western. And, most of all, they fell into a violent, frothing rage at the very IDEA of watching anime in English. Unthinkable.

This post is dedicated to them. Because I watched the English dub of Death Note and I thought it was great. All those American-accented voices. Speaking English. So nice, not to have to focus on a bunch of subtitles. God, I hate weeaboos. They’re annoying as fuck and need a serious beatdown from reality. But I digress.

Death Note is beloved for its mix of Serious Adult Themes and supernatural thriller elements, plus its Gothy aesthetic. I found it to be a very good anime series (no, I haven’t read the original manga; shaddup) that doesn’t feel dated and takes an engaging approach to its premise. It falls under that cool subgenre where a single improbable or supernatural element is superimposed onto the real, everyday world. In this case, we learn of the Shinigami, Japanese spirits of death, who reside in their own realm and regard humanity with jaded amusement. Each Shinigami posseses a notebook that can end the life of anyone whose name is written in it. One such Death Note plops down in Tokyo and is found by Light Yagami, a brilliant high school senior who sees in it a golden opportunity. He’ll use it to kill all the bad people clogging society, creating a brave new world! Light is a sociopath in need of an outlet. Give him a country to rule, and he’d terrorize its inhabitants while insisting it’s for their own good. Give him a Death Note, and he’ll literally murder anyone he needs to in order to justify his precious Utopian vision. 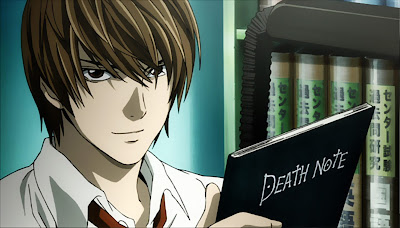 The Death Note provides us with another beloved storytelling trope, the Three Rules. Don’t feed a mogwai after midnight. A robot may not harm a human being. The Three Rules are fun because of how much mileage one can get from exploiting them for loopholes and side effects. The Death Note’s rules are 1) Write someone’s name in the notebook, and they will die forty seconds later; 2) You must picture the victims’s face in your mind, in order to avoid killing the wrong John Smith (crucially, this means you can’t kill someone if you don’t know what they look like); and 3) The victim will die of a heart attack by default, but you can customize the time and manner of death by writing it down. Oh, and a human who touches the Death Note can perceive Shinigami, which is why Light finds himself bantering with Ryuk, a wry, apple-chomping spirit with Gollum’s eyeballs who dresses like the most punchable Goth who ever slouched through a Hot Topic. As Light begins snuffing criminals, the world takes notice. Not everyone wants to stop the unseen death-bringer, whom the media dubs “Kira.” Some want to sing his praises.

This is where the ethical richness of the scenario unfolds. A world free of murderers, rapists, drug dealers, dictators, warlords, war? Sounds pretty awesome. On the other hand, how does one man have the right to judge an entire species? Is Light a savior or a psycho? A special task force is formed to catch Kira, and teams up with a reclusive detective known only as L. L is the best character by far: disheveled and detached, snarfing sugar to fuel his superbrain, he soon has Kira pretty well pinned down. But Light is counting on being hunted, and Death Note comes alive when it focuses on the psychological ballet between Light and L. As if the intrigue wasn’t piled on heavily enough, Light’s dad is chief of police, and Light finds his way onto the task force. Light can’t kill L without his true name -- and killing wantonly would blow his cover. L thinks Light might be Kira, but doesn’t want to waste him as an ally. Thus, they circle, probing each other. It’s an ongoing game of strategy in which each must play their best cards without revealing their hand. It’s pretty riveting. 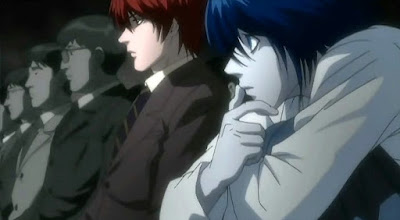 Death Note would be amazing from start to finish if it were entirely about Light vs. L. It’s a great 24-episode anime. If only it didn’t last for 37 episodes. I enjoyed the whole thing, but it felt bloated overall, and frequently lost its way. For instance, at one point Light willingly loses his memories of being Kira. While it’s interesting to see how the move fits into Light’s larger scheme, it reduces Light to a bland boy scout for way too many episodes.  Around this time, the show twists itself into something resembling a wacky espionage thriller, with an unpleasant aftertaste of romantic comedy. Yeah, things get more fun when a second Death Note appears, but unfortunately, its bearer is Misa Amane, a shrill pop starlet who attaches herself to Light. Misa is the Jar Jar Binks of Death Note. She’s an entirely juvenile character, she embodies every negative female stereotype, and the show stubbornly keeps her around till the very end, long after she has anything to contribute to the plot (the real romantic tension is between Light and L, as anyone can see). In general, the show doesn’t portray women very well; they’re often hapless, and the stronger female characters tend to get killed off.

But the big issue is L. As I said, he’s the best character, and the subtle internal war between him and Light is the best interaction. However, at around the two-thirds mark, L is booted from the storyline and replaced by a character who, while interesting enough, lacks L’s unique pizzazz. The post-L portion of the show struggled to hold my interest, introducing too many new characters and plot details as the final episodes huffed and puffed toward a resolution. The three cardinal rules of the Death Note were joined by many more, some quite redundant, and it became difficult to keep track of who had a Death Note, how many there were, and how Light’s plans kept changing. Light was diminished without a worthy nemesis. I like a character-driven story, but Death Note should have limited itself to a small cast while broadening its exposition. I wanted to see more of how the existence of Kira affected the world, how different societies reacted, what circumstances arose. And I wanted way more of the Shinigami realm, which all but vanished after its introduction. 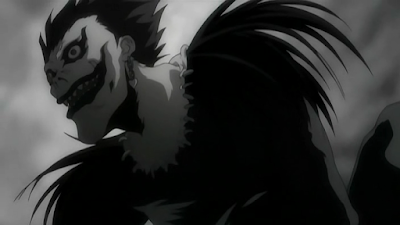 Still, what a beautifully made anime! You can’t tell this kind of story without getting biblical, and here, we get tons of appropriate imagery (apples, winged beings, shafts of light) while the soundtrack hits us with ominous chimes, Gregorian chanting, and “O Fortuna”-style choral yelps. Anime dialogue is often heavy-handed, and in this case, time keeps freezing as Light delivers a smug interior monologue. But it works, because it ties into the thriller elements: there’s a reason the villain always describes his plans for our benefit. I really loved the use of colors and monochrome, the low-key art style that occasionally exploded with stylistic flourishes. And even when the plot spun its wheels, it remained enjoyably unpredictable. I even liked the opening credits, because they bombarded me with visual clues that I could gradually decipher. (I did not, however, enjoy the opening theme songs, which began with a whiny, barely-pubescent rocker and ended with shrieky death metal.) I’m hardly an expert on anime, but on a scale of one to ten where one is DBZ and ten is Miyazaki, Death Note is at least an eight. Its technical and artistic quality never slips.

But the weeaboos would tell you that I have no right to be reviewing Death Note at all, because I committed the cardinal sin of watching the English dub. See, if I could appreciate the great subtlety and flawless delivery of the original Japanese, I would actually understand the show’s true meaning. And the manga is still better, obviously. Because everything Japan does is superior in every way. Kawaii. You can see why I prefer to blot out the weeaboos and their delusional standards and just focus on enjoying Death Note on my own terms. It’s an excellent anime with great ideas and a couple truly definitive characters. Watch it sometime, and ask yourself if you’d oppose Kira, or root for him...

VERDICT: A solid squee! In English. 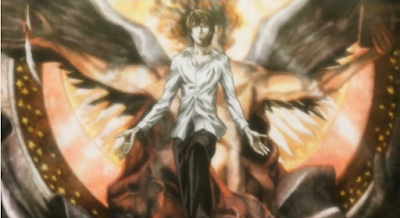