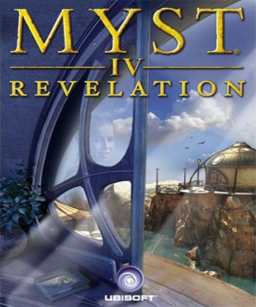 It makes me sad that the Myst series is so fleeting; it really does. Yeah, you can replay them after you’ve had time to forget all the puzzle solutions, but you miss the initial sense of wondrous discovery, each new Age unfolding before your big moist eyeballs. These games are so beautiful to look upon. It does give me some hope that there are current developers out there who, thanks to technological improvements and crowd-funding, can actually follow in the footsteps of Myst. This game and this other one look very promising; maybe they’ll even show some mercy to us filthy, depraved, scumbag Mac users! In the meantime, here’s Myst IV: Revelation, my personal last hurrah with the series.

So this is a damn good entry that is hurt by some huge flaws. Basically it’s just that the entire plot and all the characters suck; nothing major. Believe me, I love Revelation; I just have to accept that it faceplants when it comes to telling a compelling and non-derpy story. Hokay, so, you arrive in the Age of Tomanha to visit Atrus’s family, just like in the last game. Tomanha is now much bigger, and is a fucking dream home: a series of handsome wrought-metal buildings connected by walkways around a central lake, complete with observatory, greenhouse, kitchen/den, separate bedroom suites, and secret passages. Damn, Atrus! I guess if you can write a world into being, you can award yourself a first-class pad. Catherine is elsewhere but Atrus’s daughter, Yeesha, is around, and...ugh. Yeesha. “This franchise can totally benefit from an adorable and overly precocious child!” said no smart-thinking person ever. Yeesha (Juliette Gosselin) is about ten years old and is so cute and plucky that you can’t help but want to smack her. Plus, her dialogue is peppered with anachronisms. That’s a huge problem this game has: half the characters talk like they’re in a period costume drama and the other half use modern American slang. It is distracting as FUCK. But anywho, Atrus has to leave on some contrived business, and then you get knocked out, and when you come to, Yeesha has vanished, and... 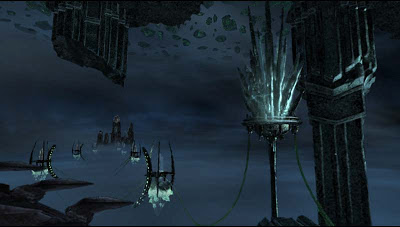 Sigh. Okay. Spoiler alert and all that. Remember Atrus’s evil, power-hungry sons, Sirrus and Achenar? He appeared to kill them at the end of the first game. Fakeout! All he destroyed was the means of communicating with them. See, when he realized they were rotten, Atrus tricked his sons into separate Ages and trapped them there. Because Atrus makes dumbass decisions, he didn’t just stick them in the literary equivalent of a bare cell, but gave them whole expansive worlds to play around in. No way THAT could go wrong! So the cold, intelligent Sirrus (Brian Wrench) has been stranded on Spire, a floating mass of Gothic architecture, while the dumb, animalistic Achenar (Guy Sprung) was stuck in Haven, a fecund jungle realm. When we learn that Sirrus harnessed Spire’s unique anti-gravitational properties and Achenar developed a symbiosis with Haven’s ecosystem, can we truly be surprised? NICE GOING, ATRUS. You guessed it: Sirrus and Achenar have busted loose, nabbed Yeesha, and are plotting an evil plot. And only you can stop them. Lord knows Atrus is fucking useless.

The Ages of Revelation are definitely the loveliest in the series. I would kill to live in Atrus’s family home on Tomanha. Spire and Haven are unique and visually thrilling. And there’s a final Age, Serenia, that’s like the ultimate vacation spot: crystal-blue water, floating stone dolmens, friendly priestesses, whimsical flora. It’s in Serenia that Sirrus and Achenar are plotting their plot, and it’s also where the game’s story takes a detour into pure dopiness. It’s really convoluted. Multiple sharks are jumped. You have to discover your special element and charm a spirit guide, and there’s this business with a giant fungus that absorbs the memories of the dead, and then you take a trip into the Spirit Realm where you receive help from your spirit guide, who is voiced by, I kid you not, Peter Gabriel. This is just....it’s just...my God. I don’t know what the developers were smoking. It’s like you’re suddenly playing an entirely different game, one designed for the children of hippies. The mystical new-age bullshit just does not jive with the series as a whole. Serenia may be pretty, but I much prefer exploring Spire and Haven, gradually learning how the brothers thrived in their prisons and worked out their escape. The puzzles in Revelation are back on track in that they’re really freaking devious; Spire in particular made me pull a lot of hair out. That just makes it harder to swallow Serenia and its fucking elemental spirits. Guhhhh. 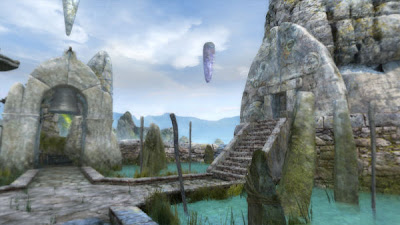 If you can swallow its dumber elements, Revelation is awesome. The gameplay is much the same, but they hand you a few new toys! There’s a steampunk camera with an attached notebook where you can jot stuff down. I’m guessing they realized that since the average Myst player takes tons of screencaps anyway (and, back in the 90s, jotted clues down on paper), they might as well build it right into the game. It makes you feel kind of like a fantasy tourist -- and, honestly, if you were able to visit and explore the Ages of Myst, wouldn’t you want a goddamn camera? Especially when any carved symbol, pattern of lights, or obscure piece of sculpture might turn out to be an all-important clue? You also get a medallion that shows you scenes from the past, mainly for exposition, but it does help shed more light on the characters and their actions. Too bad they’re all so poorly-realized. It seems that a more elaborate plot is not a plus in a Myst game. But if you can quell your cynical side, you can still enjoy the game for its elaborate puzzles and topnotch visuals. Makes you really look forward to a fifth entry!

Only...Myst V: End of Ages is a game that fills me with unhappiness, and here’s why. Because they finally did it. They decided to give the gameplay a complete overhaul. Damn them all to hell. As I said, I haven’t played Myst V. Maybe it’s fun. But it doesn’t look like a Myst game to me. Instead of wonderful, pre-rendered environments that you click your way through, End of Ages features free-roaming movement and graphics like you’d find in World of Warcraft. Instead of live-action performers, you get CGI mannequins. Even the core gameplay is way different; now you have to scrawl symbols on a magic stone tablet in order to command a race of shadow-creatures. Yeah, that’s totally a Myst game, right there. I just cannot accept such tinkering with the formula. And the thing that really saddens me is that End of Ages was, for the most part, critically applauded. Congratulated for “updating” the series and tossing out the “obsolete” aesthetic of before. Oh, so unparalleled visual beauty in games is obsolete, huh? Fuck you. Fuck you in the tonsils. I’m not gonna say that I will never play the fifth and final Myst game, but I will say that it offends me on a primal level. The series deserved a better cap-off.

The first four games are all very good, though. Truly a one-of-a-kind franchise that was lucky enough to find a willing audience. That audience hasn’t ever gone extinct, believe me. Mysterious, contemplative, violence-free games still have a place. I’m going to continue this review series by looking at other games that I feel are spiritual descendants of Myst. Just a couple for now, but there may be more off in the future. As long as gamemakers dare to dream, I guess. 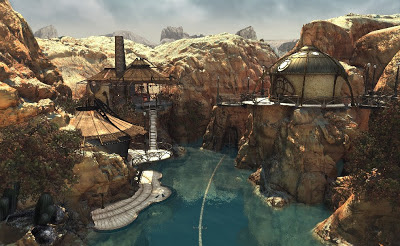