To Squee Or Not To Squee: Oblivion 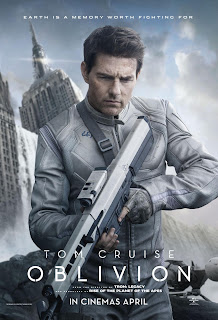 I’m on a Cautious Enthusiasm roll!

It’s the dawn of the summer blockbuster season and I just watched Oblivion, which is probably out now because it’s not quite dumb enough to compete with whichever giant robots or superhero bros are vying for our ticket money this year. Oblivion turned out to be way better than I figured it’d be, while not quite reaching that golden plateau of brilliance attained by, say, Blade Runner or Minority Report. The trailer for Oblivion really piqued my interest, but it also seemed to give away most of the plot. I’m very happy to say that the actual film is, if not terribly original, a lot more complex and head-fucky than I expected. So kudos!

I’ll spoil as little as I can. Tom Cruise narrates endlessly at the start of Oblivion, and there’s a lot to ingest. Sixty years ago (in the movie’s timeline), hostile aliens arrived on Earth. Their plan was ingeniously nasty: they blew up the moon, turned the planet into a Roland Emmerich movie, then moved in after our shit had been ruined. We won the war in the end, but Earth was left a largely irradiated wasteland. Now the remnants of humanity live in a floating space station, and are in the process of moving to Saturn’s moon, Titan. We’ve built massive power-plant doohickeys to suck the last resources from the oceans, but they’re in danger from the few aliens still skulking about. The doohickeys are defended by trigger-happy robotic drones, which are in turn cared for by Jack Harper (Cruise), a handyman who commutes to the planet’s surface every day from his sleek, photogenic sky-penthouse, where he enjoys sleek, photogenic sex with his mission partner, Victoria (Andrea Riseborough). They’re pretty much the last people on Earth, and soon they will leave as well. That’s the premise -- or, at least, the supposed premise.

It’s hardly surprising to learn that Jack and Victoria had memory wipes prior to their mission.  There has not been a single movie in this genre where the initial premise is the absolute truth, nor a single male protagonist who starts out the movie schtupping the woman he’s truly meant to be with. Sure enough, Jack dreams about another woman (Olga Kurylenko) whom he remembers but can’t put a name to. When he meets his mystery lady face to face, it’s under surprising circumstances: she’s in a cryo-pod, which is in a pre-war ship that crashes on Earth, and Jack has to save her from being charbroiled by the very robots he takes care of. Now isn’t that strange. The trailers give away some of what happens next, including that there are still humans living on Earth (hey, you get Morgan Freeman for a movie, you damn well let people know) and that Jack and Victoria’s largely unseen superiors may have a sinister agenda. But I’m leaving out four or five twists that are quite effective, if derivative. The movie is strongest when it’s exploring the mysteries of its plot, gradually unpacking one truth after another. As we expect, Jack is soon at odds with Victoria and must Question All He Ever Knew and blah blah blah. But it’s harder than you might think to guess the next direction the plot will take. I like it! It’s cobbled together from other sci-fi films, but at least it doesn’t insult the intelligence. 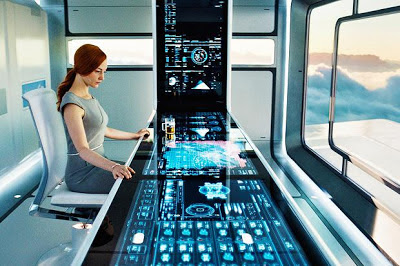 I can forgive a lot if a movie looks good, and Oblivion looks fantastic; I adored its depiction of an utterly ruined Earth, in part because it dared to make the devastation beautiful. This future world is composed of vast peaks and bleak, endless barrens, and the remains of buildings and towers and ships look like some kind of dreamlike abstract sculpture (I do have to laugh, however, at the sheer durability of famous national landmarks; way too many of the landscape shots have some iconic building or monument to ID.) By contrast, Cruise and Riseborough get to lounge around in their swank glass eyrie (probably designed by Apple) and Cruise pilots a nifty gyroscopic aircraft that totally looks like a cock and balls, but what can ya do? The musical score is also fantastic, if a bit relentless at times. I’d love the film way more if it were just the surreal special effects and the cryptic plot, but there are also token action scenes, and like I feared, they’re annoying. Oh, they’re done very well, but they make a jarring contrast to the rest of the film. There’s one foe that Cruise has to battle repeatedly (to describe it would be a spoiler), and his smackdowns with said foe get predictable, especially since it has the type of big glowing weak spot you see in video games.

Also, stronger characters would’ve been nice. Cruise is as watchable as ever (Jesus, he’s really fifty?), but he’s playing the role he’s most comfortable with: an action everyman who can be our blank slate. Morgan Freeman, likewise, plays the same damn part he always plays. Olga Kurylenko’s character is a weak link; although she has one effective scene of powerful emotional revelation, she’s just The Woman, and the job of The Woman is to look lovely and concerned while standing slightly behind and to the right of The Hero. Her mystery lady disappears behind the mystery. I was way more invested in Andrea Riseborough’s Victoria, who, in terms of her motives and character arc (again, no spoilers) is a tragic figure indeed. Finally, Melissa Leo does good work as the slightly-too-upbeat talking head from Mission Control who appears on Victoria’s monitor, but since we just know she’s gonna be an antagonist, we can’t feel much for her. There are, shall we say, potential reasons for some of the characters to be thinly defined; for once, it may actually be appropriate for the plot to dominate the cast. But our emotions are kept at bay, and the ending is a rather annoying cop-out. Yay, says the studio, we managed to wrangle a happy ending from all this! Yeah, but happy on a very false note.

I do recommend Oblivion. Fans of sci-fi will not be disappointed, though they may be checking off all the other films that this one borrows stuff from. I enjoyed it enough to want to see it again, maybe even own it. And I’d be happy if they made a sequel, possibly dealing with certain of the characters struggling to find their place in the current world (yet again, no spoilers, but Victoria really ought to be the main protagonist of the follow-up). It was a good film to see on an otherwise quiet Sunday, and a good take on the postapocalypse. There’s even a dog! Because we all know dogs in movies can survive the end of the world. Guys, if aliens invade and blow up the moon and all, find a cute dog and fucking STICK with it.

VERDICT: Sure, I’ll give it a squee. A squee for effort. 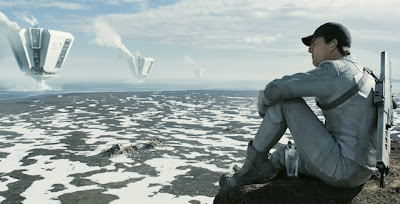