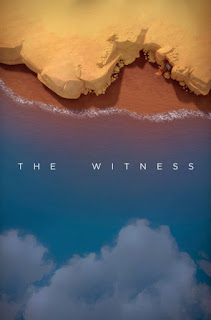 It would have been appropriate to begin this post with a deeply profound quote from someone like Thomas Edison or Voltaire, or at least Kurt Vonnegut. I have chosen instead to begin with lyrics from Rent. If that makes no sense, neither does The Witness. Har har.

This is technically a Cautious Enthusiasm post, but I’m sticking it in my Myst review series because...well, come on. I’ve been eagerly awaiting The Witness for some time, because A) it’s made by Jonathan Blow, whose first game, Braid, was awesome, and B) it looked exceptionally Myst-like. Oh, is it ever. In fact, it could serve as the finale to my Myst review series (even though it won’t be), for it incorporates elements from many of the previous entries. As with Myst, you are an anonymous explorer plunked down on a peaceful island covered in puzzles. You will glide through pristine, beautifully-rendered desolation (The Talos Principle!) and perform obscure acts of archaeology (The Dig!) with the strong sense that this is some sort of ancient repository of knowledge (Submachine!) and the growing suspicion that the obtuse mysteries of the landscape have no real solutions (Kairo!). And, just like in Fez, you’ll probably tear your hair in anguish once you realize that you’d need to be the lovechild of Buddha and Alan Turing in order to unlock each and every secret. None of this is a bad thing...mostly.

See, Jonathan Blow makes games that have Deep, Profound Meanings and subvert the very definition of the medium. Braid took the most primeval elements of gaming -- you’re basically Mario fighting Goombas -- then turned it upside-down with time manipulation, then introduced another layer -- the Princess you’re trying to save actually needs saving from you -- and then stirred in an even deeper layer with a bunch of allusions to the Manhattan Project. “Layer” -- that’s a buzzword we’ll return to soon. The Witness bears no obvious resemblance to Braid, but there are a couple parallels: the teasing of very simple puzzle mechanics into complex and unexpected forms, and a subversion of the idea that you, the player, are merely a passive observer pushing buttons with no emotional investment. A witness. Braid toyed with your expectations about the main character, and The Witness has no main character at all, just you. Who are you? 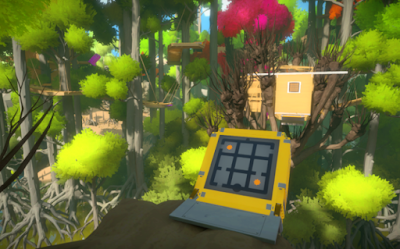 Well, you might be someone who hates The Witness and finds it inane and tedious. You’ll know within the first few minutes. As the game begins, you emerge into the daylight, utterly alone. The first puzzle you face couldn’t be simpler: draw a line on an electronic panel, connecting a start point and an end point. In the second puzzle, the line bends. Then it branches. It becomes a grid, then a maze. Each panel unlocks something, and each is a little trickier than the one before. And that’s all you’re gonna get -- it’s panels all the way down. The beautiful setting is bigger than many islands from the Myst games but small enough that hiking around never becomes boring. The island is divided into obvious temperate zones, and scarred by the remains of industry. You obviously aren’t the first visitor, but as you explore, you’ll find...well, they’re either people who turned to stone or they were statues to begin with, but their appearance and frozen poses hint at a great deal. There’s a desert and a swamp, the ruins of temples, castles, and factories. And panels.

I can easily enjoy a game that’s fun to explore, and The Witness is wonderful to explore. The graphics have a painted-in quality -- soft at the edges with a slight oversaturation of color -- which adds more to the experience than if they were simply realistic. There’s no music and plenty of ambient sounds. You won’t want to be distracted, because the initial simplicity of the puzzles is an illusion. At its core, each panel is the same: draw the line from A to B. But new variations, new themes, appear constantly. You might need to draw the line so it touches certain points, or creates Tetris-block shapes. Many puzzles combine with the environment around them. Often, you must look carefully, listen keenly, or be standing in a certain spot. I don’t want to spoil too many specifics; this game is better when you discover it for yourself. But I was delighted by the innovations. The Witness is very nonlinear; you’ll often find puzzles that you can’t understand, as their solutions lie elsewhere on the island. Each zone -- desert, castle, swamp, etc. -- is a classroom lesson that you can apply to the game as a whole. Layers. 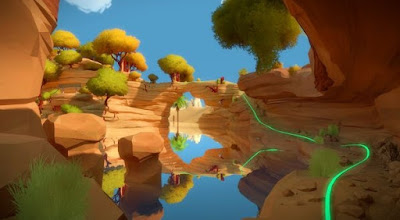 The what and the how can be untangled, but everyone who plays The Witness will be asking why. Why are you doing this? What’s the ultimate goal? Well, without revealing too much, each section of the island sticks another key in a lock. There’s an obvious endgame. But if you’re looking for a story, a point beyond zen-like ambiguity, I have to break the bad news to you. The Witness is a very, very, very pretentious game. It’s high-minded and arsty-fartsy. It takes you to task for daring to expect a plot and characters and such. There is plenty of dialogue, but it all takes the form of obtuse quotes from famous deep thinkers, read by actors with soothing voices. Likewise, if you solve the extra-tricky vault puzzles and find the hexagonal keys, what they unlock is murky and yawn-inducing. Many critics will heap praise on The Witness for being profound. I don’t believe that a bunch of flowery wisdom and self-help platitudes equal profundity. But maybe that’s part of it? Maybe it’s subtly satirizing the recent trend for “deep” games that showcase style over substance? More likely Jonathan Blow is a Jonathan Blowhard.

Layers. The Witness contains layers upon layers, for better or worse. As I implied earlier, I didn’t come close to discovering all it had to offer. I guess I beat the “main” game. I appreciated how the central village is like the island’s final exam. I wasn’t a big fan of the endgame, which seemed determined to annoy me with esoteric puzzle handicaps. I liked the ending I got, but it’s probably not the only ending, because I left a shitload of stones unturned. Beneath the panels and their many variations lies at least one more layer of puzzles. They’re insidious. Puzzles are literally woven into the landscape, the ground, air, and water. Once I realized they were there, I found myself noticing more and more of them. But finding every single one? It’d take an age. My eyes would fall from my skull. I wouldn’t be surprised if no one has gotten one hundred percent completion on The Witness yet. I think, the more we discover, the more impressed we’ll be. The wait was long, but Blow didn’t give us a half-assed result. In fact, he went farther than I ever imagined. 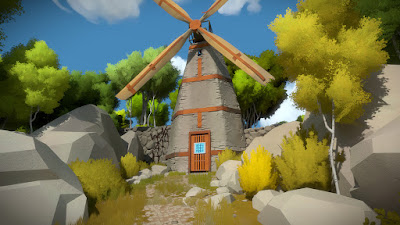 Is The Witness saying something incredibly profound, or does it have nothing to say at all? People will disagree. The biggest thing I got from it was satisfaction. Not from grasping its elusive “meaning” but from simply solving puzzles. Making the connections. Hearing the lightsaber-hum of a completed panel, an electrical line lighting up, connecting me to the next panel, and the next. Progressing. I refuse to offer any wishy-washy interpretations of The Witness, but one credo I detected within its many layers was that there is great human pleasure in the act of creating something. Especially if it’s something that lingers, remaining for others to appreciate. Like a game. In The Witness, others have come before you and left their mark. They remain in stone, silent witnesses to you, the latest contributor. They provided the puzzles, you’re providing the solutions. It feels good. If a game makes you feel good, it has succeeded, and hopefully you can forgive it for certain traces of artistic arrogance.

Do me a favor. Google Andy Goldsworthy. He’s one of my favorite artists, and you should quickly see why. I bet he and Jonathan Blow would agree on a lot of things. You don’t always need pages and pages of academic interpretation. You don’t need to stand before a work of art, sipping champagne and endlessly debating its themes and subtext. Sometimes it’s just beautiful.

Draw a line in the sand. Look: you made something. 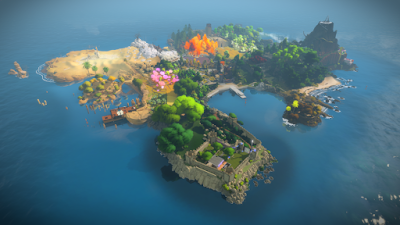