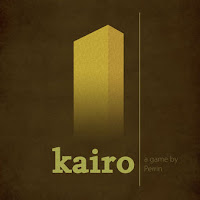 Kairo -- The Legos of the Apocalypse

Before closing the curtain on my Myst review series (for now), I’d like to post about one final game. I played this one quite recently after it caught my eye on Steam. My thought after watching its trailer was, “This looks like Myst!” which meant I was basically sold. The game is called Kairo and was made by developer Richard Perrin, and...kind of defies description. That is to say, I can easily describe what the game is like, but its meaning is far more elusive. If it even has one. It is both elegant and maddening in its sheer, poker-faced ambiguity; you could analyze it in depth, but you might be thinking about it too hard. Does the experience make it worth the artsy-fartsyness? Hmmmmm.

This post may be short, because I don’t have to spend paragraphs unpacking the plot, because there freaking isn’t one. You begin the game standing on some kind of smooth-edged gray architecture in the middle of a blank white expanse. You can walk around, run, and jump. That’s it. There’s only one other structure visible, so you head that way. A passageway leads you into a deep blue space that kinda resembles a throne room. Soon after that comes a grass-green park (?) brimming with what could be abstract sculpture. And so forth. Kairo is composed of smooth surfaces, solid color schemes, ambient gloom, and environments which suggest much but never quite reveal what they are or who made them. There is no real connection between each space, no adherence to the laws of physics -- beyond the fact that several “hub” areas contain portals to other places where you must solve puzzles to ultimately unlock the way forward. As in the Myst and Submachine games, you are a faceless Anybody, entirely alone, surrounded by silence and isolation. And, once again, you’re wandering in the ruins of a once-great civilization. Or are you?

I honestly don’t know. Kairo is, by far, the most obtuse of these games. No plot. No explanation. You do find various cryptic clues: classical artwork, glyphs, staticky screens from which unsettling silhouettes regard you, giving nothing away. The buildings and promenades are grand in scope, though there is a bizarre simplicity to them, as if you’re trapped in a world of titanic Legos. So, is this an advanced civilization that fell to ruin ages ago? Or are you in some type of artificial environment, a guinea pig to higher beings who watch to see what you’ll do? Maybe this is what the end of the world looks like: no hellfire or chaos, just a sad, dusty abandonment of everything we ever created. Monuments to nothing. You see how profound I’m getting here? The thing is, maybe I’m overdoing it. Maybe Kairo is nothing more or less than an interesting puzzle game. It’s kind of nice to have the freedom to interpret, but what if the developers are laughing at me for assuming there’s anything more to Kairo than its surface? 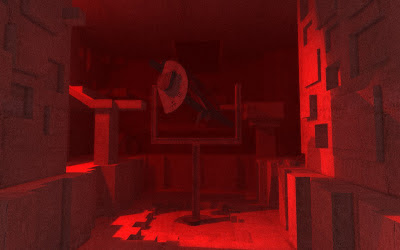 Is this a fun game? Well, yeah, though it kinda lacks lingering appeal. Its visual style is very neat, to be sure, creating deep atmosphere out of basic geometry and oversaturated colors. Its puzzles are okay, but kind of easy; since you can only interact by pushing, stepping on, or bumping against things, it limits what is possible. Push the cube into the alcove? Check! Headbutt the wall switches in the right order? Sure thing! Align the symbols? Man, suddenly I miss Legend of Zelda. I don’t think the CliffsNotes puzzles are the point here. The point is the mystery, and the ability to explore. Both are considerable. Many of the areas are bigger than they need to be, and if you poke around enough, you’ll find hidden easter eggs, bonus puzzles, and a series of concealed glyphs. Yes, there is more to Kairo than initially meets the eye and it does have minor replay value if you’re the obsessive type. But it’s also fairly short and unchallenging. One of those games that’s slightly less interested in being a game with goals and stuff than it is in making a cryptic “statement” of some kind. Games like this can really piss me off, but I forgive Kairo because it doesn’t trumpet its “statement” from the rooftops. By contrast, Braid is a fantastic game, but its utterly smug, text-heavy epilogue (it was a Manhattan Project allegory all along!) makes me want to stomp on Jonathan Blow’s pretentious little feet. Kairo hides its true meaning, if it even has one, and so is marginally less twatty.

Fans of Myst will probably like it, and that’s the important thing. Its makers have tapped into some of the same mystery and melancholy that we remember from the original Myst and Riven. In a way, they’ve stripped all the distracting stuff and focused entirely on the essence. It makes for a cerebral and emotionally stunted game, but it also keeps your attention all the way through. Kairo ain’t quite as good as the Myst games or Submachine -- its opacity ultimately holds it back from greatness -- but it succeeds well enough that I’ll suggest you play through it on a gray, rainy afternoon while sipping tea. Yeah, it’s a rainy-day, tea-sipping game for sure. Hopefully some people will appreciate what I mean.

More reviews in this series may come down the line. For now, though, let us bid these strange worlds farewell, and promise to revisit them again the next time we’re in the mood to get lost in a good game. Quite literally lost. That’s the fun of it. 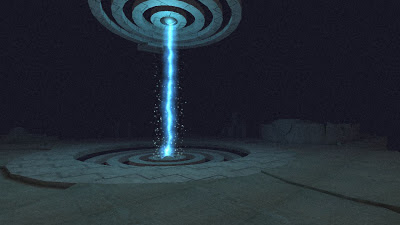