"The Desolation of Smaug" Trailer 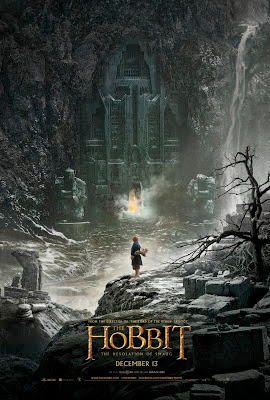 As always, my blog posts are infrequent over the summer due to my seasonal job (traveling youth circus!), which requires me to be AFK for long periods. Here’s something short and sweet for ya. I’m geeking out over the teaser trailer for The Hobbit: The Desolation of Smaug, which hit the web at the start of the week. The second film in the trilogy follows Bilbo Baggins and his Dwarf buddies as they journey through the dangerous forest of Mirkwood and reach the Lonely Mountain, where Smaug the Dragon lurks. The trailer shows a lot and teases a lot more, so let’s examine the good and the bad.

--I know it’s dangerous to make any sort of assumption based on a freakin’ teaser trailer, but does this film look darker in tone than the first one? Maybe? Yeah, it probably chooses to focus more on the action than the humor, but still. We have ominous narration from Elven King Thranduil (Lee Pace), we have all kinds of peril, nobody ever smiles, and there’s even the old cliché about how “you’ll destroy us all!” The narrative has largely left behind its “kooky” aspects like epicurean trolls and Dame Edna the Goblin King, so we might be getting something a teeny bit more in the vein of the original Lord of the Rings trilogy. I’ll take that. Which reminds me...

--Legolas is back...and he’s a total asshole! Awesome! Yes, they wrote Legolas into The Hobbit in yet another obvious callback, but since Legolas is the son of Thranduil, who does make life difficult for the Dwarves in the book, this is hardly canon-raping. Needless to say, Orlando Bloom does not appear to have aged, which is good because this is a younger, more headstrong Legolas who reeeeaaaaaaallllly does not like Dwarves. Ah, the undercurrents of racism that run throughout Tolkien’s work. Eh, I think Asshole Legolas is kind of funny.

--Speaking of Elves...holy shit, there’s one with a womb! The poor filmmakers were apparently so desperate to inject some femininity into this epic sausage-fest that they flat-out invented a new character from scratch: Tauriel (Evangeline Lilly), a fire-haired Wood Elf who’s pals with Legolas and gets to kick major ass, just like Arwen did in the five seconds before she took too much Benadryl and became a weepy-faced zombie! Tauriel’s definitely got more gumption, though. If you ever read my Lost recaps (eww, why would you do that?), you may have noticed that I picked on Evangeline Lilly a lot, but that was more to do with her character. She’s gorgeous and she does the fake accent well, so I’m glad she’s here. Even if the nerds aren’t. 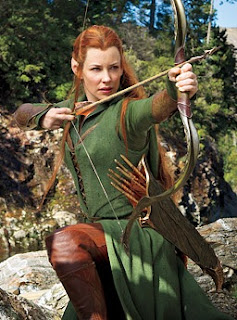 --Other characters and critters get teased! We see Bard of Lake-Town (Luke Evans, who looks and sounds creepily like another Orlando Bloom), we almost get a look at a giant spider, and there’s the random appearance of an angry bear. Spoiler alert: the bear is really a dude named Beorn who is, shall we say, lycanthropic. Plus: fleeting shots of cool new locales, such as Lake-Town and the Wood Elves’ kingdom. Plus: familiar faces like Radagast and Thranduil. Oh, who am I kidding? We all know which tease is the most excited-urine-inducing...

--Smaug, ladies and gentlemen. The trailer ACTUALLY SHOWS HIM. Well, his head. But that’s more than enough to tide this fanboy over. I just assumed they were gonna leave the dragon mostly or entirely unseen. Keep up the obnoxious teasing that’s been going on since the first film. But nope -- they unveiled Smaug, and it wasn’t a glimpse but a long, leisurely look at his scaly visage leering at poor Bilbo. FUCK YES. Just that one shot made me ten times more excited for this movie. But it didn’t quite distract from a few sour points...

--There seems to be way more action in this installment. “Good!” a lot of people will say. “I got so sick of backstory and Dwarf songs during the first one! Bring on the fight scenes!” They may be right, but I worry that The Desolation of Smaug will have the weakest plot of the three. No setup and no real climax, you know? It’s tough to be the second film in a trilogy.

--Crappy special effects, anyone? While the fake scenery was as sumptuous as ever, the action shots featured some incredibly unconvincing CGI people. The Elves in particular looked like boingy cartoon characters. I really hope they’re still tinkering with post-production effects, because I refuse to believe that, ten years later, the effects will look worse than in LotR.

--Wherefore art thou, Gandalf? He appeared very briefly, and a Tolkien film without Gandalf is like nachos without salsa. Problem is, Gandalf disappears from the narrative for a really long time, leaving Bilbo and the Dwarves to fend for themselves. Clearly, the movie will show what he’s doing -- he’s at the fortress of Dol Guldur, investigating this creepy Necromancer fellow -- but they may have no choice but to scale his role back. And while we’re on the subject, why did Bilbo and Thorin, our heroes, appear mostly in quick shots and not get any lines? They’re playing up Legolas and his Elf brethren a lot, but come on. We care more about the MAIN CHARACTERS.

--Some of the dialogue was a bit derpy. I especially liked Legolas and Tauriel: “This is not our fight!” “This is our fight!” “Is not!” “Is too!” “Nuh-uh!” “Uh-huh!” I feel like they could have chosen better soundbites -- again, why didn’t the more entertaining characters get to talk? Well, at least we still have the wonderful Ken Stott (as Balin), who can make absolutely any line sound wise, earnest, and convincing. No wonder they let him narrate all the backstory.

--Oh, good, Nasty Albino Orc Dude is still around. In case we forgot how pointless that character is. Especially compared to...well, every single character who wasn’t created on a computer, and some who were.

--One final thing to be sad about: although we got a good look at Smaug, we didn’t hear his voice. And that is a huge bummer. Because we all know who’s giving voice to the dragon: the one and only Benedict Cumberbatch. Who is pretty much the coolest person who ever lived. Oh, my goodness, that voice of his. That charisma, even in the form of a giant fake dragon. Damn them for not including his voice! Damn them for being smart enough to know what they can gain by withholding stuff from us! I truly believe that Cumberbatch alone is going to make the second film better than the first one. 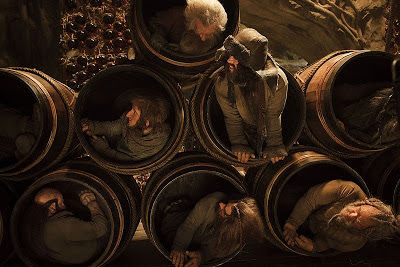 A few more months and I can see how the actual film measures up! I’m excited. It’ll be the perfect antidote to the bleak, grim, bloodsoaked sobfest that is the second Hunger Games movie. I mean, I’m super-pumped for that one too, but JESUS. I think I prefer Dwarves in barrels to elderly black men getting shot in the head. But I digress.
Posted by Dang-Blasted at 11:22 AM