To Squee Or Not to Squee: Hannibal, pt. 1 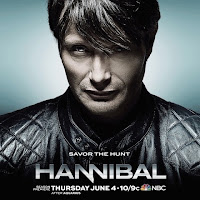 It’s time to fine dine on some Cautious Enthusiasm.

To begin with, let’s all agree that writing about Hannibal in a manner that does it justice is next to impossible. This TV drama cannot truly be experienced secondhand; it must flicker before the eyes and whisper its music in the ears. It’s easy enough to describe what it’s about on the surface. It’s about Hannibal Lecter, our most beloved of fictional serial killers, and his relationships with the various people in his orbit, or on his dinner table. Really, though, the plot is a thin layer of infused oil floating atop a deep, rich, nuanced roux of mystery ingredients. After two-and-a-half seasons, I’ve come to accept that nothing in this show can be taken at face value. It runs on dream logic. It is not set in our world. Movies depict versions of human society where superheroes or monsters or giant robots exist and are simply accepted in day-to-day life. Hannibal is like that, but its world crawls with theatrical killers, people who turn people into gourmet dishes, or craft corpses into totem poles, or bury their still-living victims to nourish mushroom gardens. And it’s not enough to call Hannibal Lecter their king. He is their god. An avatar of controlled chaos.

Writing about the third season of Hannibal would be very different if this weren’t also its last season, maybe. The show has been canceled by NBC, a guillotining as dismaying as it is probably inevitable. Hannibal was never going to pull in the crowds. Bryan Fuller doesn’t make crowd-pullers. He doesn’t stoop. The fanbase is small and fervent, pruned over time as “normal” folks stumble away, mewling that it’s too weird, that they can’t handle all the hoity-toity psychobabble, that only freaks want such an ornate parade of carnage and guts. They may be right. I’m proud to be a freak, and so are the people who make Hannibal. Possibly guessing that Season Three would be the swansong, they turned it into a cry of defiance, diving deeper into their trademark use of slow motion, macro closeups, surreal special effects, discordant music, and the repurposing of gore as high-class theater. They’ve also ventured further into the show’s central coupling, that of Hannibal (Mads Mikkelsen) and FBI profiler Will Graham (Hugh Dancy), who circle each other with helpless fascination. And, to ensure the show’s budget reports would burst some capillaries in the NBC offices, they went to Italy. 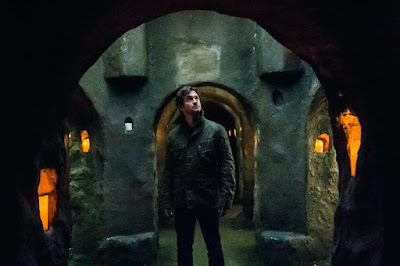 For the uninitiated, there are three Hannibal Lecter novels by Thomas Harris: Red Dragon, The Silence of the Lambs, and Hannibal. (There’s also an origin story, Hannibal Rising, but let’s not count that. Please, God, let’s not count that.) So far, the TV show hasn’t really sunk its teeth into the novels. Its first two seasons masked themselves as police procedurals, a string of case-of-the-week killers to appease the mainstream while the show quietly developed its themes of obsession, madness, love, death, and betrayal. And now the books, right? Well, yes, but they decided to bump the novel Hannibal up the ladder of their chronology. These first seven episodes of Season Three find Hannibal hiding out in Florence, accompanied by his therapist-turned-accomplice, Bedelia du Maurier (Gillian Anderson). Florence, that most beautiful of cities, here turned into an echoey mixture of postcard and necropolis. In the Season Two finale, Hannibal left most of the main cast horribly wounded in body and soul, and his living victims remain drawn to him, one way or another. Will Graham seeks, not revenge, but some sort of affirmation he can’t define. FBI boss Jack Crawford (Laurence Fishburne), retired and bereft, craves closure on the case that has dogged him for years. Mutilated billionaire sicko Mason Verger (Joe Anderson) just wants Hannibal’s balls on a platter, possibly literally, and orchestrates a conspiracy to snatch the fugitive. But what does Hannibal want? Wisely, the show leaves him an enigma. Elements from his backstory are alluded to; Will visits the old Lecter estate in Lithuania and recruits Chiyoh (Tao Okamoto), a former handmaiden who remains quasi-willingly under Hannibal’s long-distance influence. But Hannibal himself skates over the needs of normal humans. 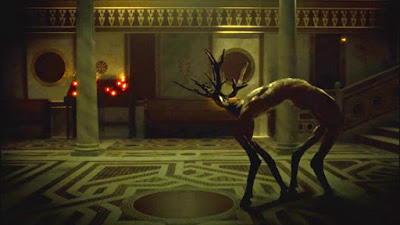 It’s all beautiful, sometimes too beautiful. The Florence arc is not my favorite thing Hannibal has ever done. Nothing may ever top the last two-thirds of Season Two, which featured a dazzling game of intrigue and treachery that blindsided us with shocking, delicious surprises each week. Having surgically removed itself from any conventional narrative, the show leans so heavily on its slow, elegiac pace that some episodes fall short of complete satisfaction. Yes, even as a devout fan, I don’t always want to spend thirty seconds staring at slow-motion liquid physics while kettledrums thunder on the soundtrack. Somehow, the plot seems to hurry unduly despite the visual sluggishness. They could easily have spent an entire season on Hannibal-the-novel. Were they eager to cram before NBC pulled the plug? Ah, well, a weaker Hannibal-the-show is still unparalleled, and they can still blindside us. I’d felt anxiety about how they’d adapt one of the novels for the first time; so many of us know what’ll happen already, so can we still be surprised? Oh, yes. They hit all the major beats: the fate of poor Inspector Pazzi (Fortunato Cerlino); the ghastly dinner date where Hannibal slices off somebody’s skullcap to sup on their brains; the showdown at the Verger farm, where Mason gleefully plans unspeakable torments. But none of these events are as we expect; they are lifted, turned about, and studied from a different angle, to amazing effect. 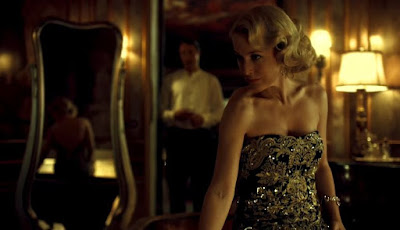 The catch, of course, is the gaping hole where Clarice Starling should be. The show does not have the rights to that rather crucial character, but their strategy is to have other characters stand in for her in unexpected ways. Best of all is Bedelia, who is played with incredible precision and subtlety by Anderson. Here is a woman who is equal parts horrified and fascinated by Hannibal Lecter, and observes him with one eye on her own survival, flirting with danger just because she can. She is the best female character the show has given us. Ah, but what matters is the love affair between Hannibal and Will, and Season Three contains all the romantic tension we could hope for. To call their relationship “homoerotic” is to miss the point; their strong attraction is, if not sexual, certainly sensual. (Will in Season One: “Did you just...smell me?”) Dancy plays Will as a man who doesn’t like other people, and who finds in Hannibal a creature he can love and hate in equal measure. As for Mikkelsen, well, he ain’t Anthony Hopkins, and that’s a good thing. This version of Hannibal has yet to taste captivity, and doesn’t feel the need to entertain. No, we’re his entertainment. It’s telling that when Hannibal is at Mason Verger’s mercy, he seems delighted, consumed with interest in his own impending fate. Humans fear death, and Hannibal is only human on the surface.

The first half of Season Three begins slow and picks up pace, culminating in a fateful collision, a serving of just desserts that is expected but welcome. But what of Hannibal’s capture? In Red Dragon and The Silence of the Lambs, he’s locked in a cell, an exhibit for doctorly types to pore over, little realizing how free his mind remains. The show has teased us endlessly; Season One ended with Will on the chopping block for Hannibal’s crimes, while Season Two gave us a blood-drenched escape. And now? Well, I guess I can spoil that Hannibal is, quote-unquote, “caught.” But it remains to be seen how much control he still wields over his situation. His seeming downfall becomes an act of triumph, and not for the FBI. As with everything else in this show, it’s a familiar trope made new and intriguing, given layers of internal logic, of motivation. This Hannibal Lecter always seems several steps ahead, as if he’s learned to live outside linear time. He can reach back along the path he’s carved through civilized society, yank on any tendon, drag any pawn back onto the chessboard. The next six episodes will tell the tale of Red Dragon, and although I have read the book and seen the film, I have absolutely no idea what to expect.

Will it be the end of Hannibal, or will Fuller find a new distributor and/or a new medium in which to present his visions? I refuse to believe this is it. Hannibal himself would never be satisfied. This is a multi-course meal; how could we leave in the middle? Rude. I’ll check back after the Red Dragon arc, and Season Three, conclude. I have more to say, more to digest. Hannibal isn’t just a meal, it’s a drug. There’s nothing else like it on television. I still hunger. 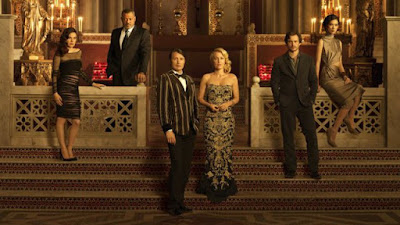