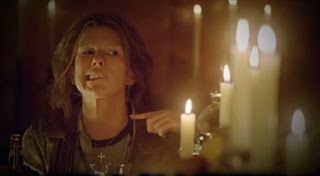 --An argument could be made that every serial killer wins. You can halt their spree, lock them up, and execute them, but it’s too late: they’re legend. James March touched upon this as he raised a glass at televison’s freakiest exclusive dinner party not hosted by Hannibal Lecter. Our species still worships a pantheon; the difference is, we are conceited enough to make ourselves the gods. And while somebody like Ghandi or Jane Goodall or Pope Francis may achieve mere sainthood, it’s the bad guys who we deify. And if ghosts are real, if negative energy and unfinished business are what causes a spirit to linger, then the great serial killers of history are truly immortal. Pleasant dreams.

--Every now and then, AHS does something where I’m not sure if I should be really, really offended. Remember when they used the racist murder of a little black boy as a set-up for rampaging zombie rednecks? They’re always crossing some line or other, and the part of me that isn’t a total freak wags a finger. It’s Halloween at the Hotel Cortez, Devil’s Night, a very special holiday. Because according to this show’s rulebook, Halloween is the one night when ghosts can wander at will. And a few of them wander over to the Hotel Cortez, where March presides over a private dinner for the worst of the worst. Jeffrey Dahmer. Aileen Wournos. John Wayne Gacy. Zodiac. Richard Ramirez. You may notice that a couple of those names were in the headlines pretty damn recently. And that’s my quibble. It’s one thing to portray, say, Jack the Ripper. But giving us Aileen Wournos, whose death is fresher than 9/11? Damn. Someone’s gonna write an angry letter or two. Anyway, they’re March’s special snowflakes, and I did find it a bit contrived that all of these killers visited the Hotel Cortez in life. The place seems to write its own reality, which is the only explanation for why no one’s noticed the FOUR THOUSAND MILLION murders committed within its walls in four episodes alone.

--Still, I think AHS did the smart thing. They didn’t try to portray these killers in a “realistic” manner, but gave us the glorified celebrity versions that the media turned them into. Wournos was played by our dearly beloved Lily Rabe, who I hope returns to her proper home on AHS now that her silly alien invasion show has fizzled. Rabe was facing the impossibly high bar set by Charlize Theron in Monster, but she was game, turning Wournos into a jittery, sneering ball of sexual fury with shark eyes. Meanwhile, in a sick little joke, Gacy, the “Killer Clown,” was played by John Carroll Lynch, aka, Twisty the Clown from last season. And was that Fringe’s Seth Gabel as Dahmer? Scrumptious. I do wish they’d acknowledged the well-known killers of the AHS-verse. Where was Oliver “Bloody Face” Thredson? Missed opportunity.

--Sheesh, I can’t believe I’m defending John Wayne Gacy, but this has always bugged me. I do not condone his murders for one damn second. I find him extra-creepy because I’ve met actual people like him: cunning, likable sociopaths surrounded by friends who witlessly deny and/or excuse their dirty deeds. Gacy was evil scum. HOWEVER, I hate the whole “Killer Clown” thing. He dressed up as a clown for certain public events. It had absolutely nothing to do with his murders. Until the media decided that it did. If we turn serial killers into gods, I blame the media for a good chunk of their holy scripture. Shit, we just turned one dead lion into a crucified Christ because Twitter said we should. I’m cutting short this rant before it goes entirely off the rails. But I’m glad this ep mostly portrayed Gacy without the clown persona. He may have worn the most unsettling makeup ever, but he was scarier as the friendly, charming neighbor with the crawlspace full of rotting teenage boys.

--Funnily enough, with a chunk of the main cast absent, it was Miss Evers who got the tragic backstory while bonding with Lowe. They share trauma: Evers lost her own son to the Wineville Chicken Coop Murderers, who I guess were too lowbrow to sit at March’s table. This apparently caused her mind to snap and her to become March’s accomplice? Maybe we’ll get the rest next week. But she’s definitely in her own purgatory.

--Lowe may be as well. Because the poor bastard was the guest of honor at the killers’ dinner, absinthed all to hell as they cavorted. And everyone else on the internet is calling the upcoming twist, so I won’t brag about guessing it. But I got the gist when Liz Taylor dramatically revealed Lowe’s personal invite. And when March was very cryptic about said invite and the reason behind it. Guys, I didn’t consider this at all. John Lowe is the Ten Commandments killer. His weird, dazed demeanor may well be covering up the fact that he himself is out murdering and doesn’t remember it! Devil’s Night may help trigger his horrified emergence. As the night wound down, Sally provided dessert -- a juicy man for the ghosts to prey upon -- and also provided solace to Lowe, writing off his experience as a boozy hallucination. I think Lowe’s about to become one cheatin’ husband.

--Alex has other problems. In the second major plot of the evening, she brought Holden home but changed her mind when he exsanguinated the dog. With Holden snug in his coffin, The Countess cast her spell over poor, confuzzled Alex. She was awfully confident that Alex would choose option A) willing vampification over option B) running to the fucking cops, one of whom is her fucking husband, who would presumably drop everything to help rescue their fucking long-lost son. Alex, you’re a tool. And now you’re a vampire. You and Iris can form a book club. First up: Fifty Shades of Grey. Also, I’m hearing theories that there’s some sort of power struggle going on between the ghosts and the vamps, with Sally as an independent go-between. I might be down with that.

--Countess costume commentary: During the no doubt massive police investigation following Holden’s disappearance, nobody at the amusement park reported seeing a woman dressed as Mary Poppins with a geisha parasol and her hat pulled down to her chin? Inconspicuous The Countess ain’t.

--AHS normally does Halloween as a two-parter, but this felt like a standalone episode, so who knows what next week will bring. I do think a little of those serial killers goes a long way. Except Lily Rabe. We can never have enough.

--This doesn’t really have anything to do with anything, but I’m fairly sure that in one shot, they digitally erased a dog’s butthole. I’m also fairly sure that the FX artist knocked back an extra glass that night.

--Hey, I sure hope Alex cleaned that broken glass off the living room floor. Someone could really get hurt! And she’d better have disposed of her dog’s corpse, because Scarlett is already gonna need copious therapy when she learns her entire family are vampires and/or serial killers. Girl can’t catch a break.
Posted by Dang-Blasted at 2:02 PM