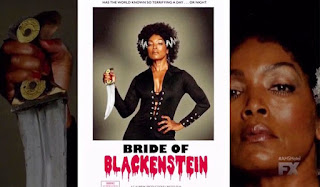 --Not “mother.” Mommy. This episode cracked open the case files on two women who lost their sons early and never got over it. Iris and Alex have plenty in common, including their helpless selfishness: He’s my son, no one else can have him! The difference is, Alex was a good mother, and she knows it, and Iris is a shitty mother, and she knows it. But both their children are now monsters, and both mommies may be heading down that path. Alex got an effective opening voiceover; we saw her dealing more with the dynamic duo of Anti-Vaxxer Mom and Measles Kid, and you could tell she was screaming on the inside: You did this to your son! HE’S YOUR SON! After losing Holden, Alex tried to kill herself once...that we know of. Now she wants a divorce, because she won’t admit that pushing her family away just agitates the wound. Never forget that AHS can be really powerful when it tackles simple human drama.

--Still, supernatural drama’s okay too. Claudia sure didn’t last long. Did they cast Naomi Campbell just so they could show her in a sexy nightie? (Hey, she looked DAMN good.) Without much preamble, the blonde junkie dude (I think his name is Gabriel?) exploded from the mattress, perforated Claudia to death, then collapsed in the arms of a startled Detective Lowe and later flatlined in the ER. Dafuq? I thought he’d already died and become a ghost! What is going on here? I demand an explanation, and I’m also okay with Claudia sticking around as a haunt. Just saying.

--The Hotel Cortez is giving Drake a serious case of blue balls. After March and Evers whined about their favorite murder-floor being renovated, Tristan sashayed to the penthouse suite, seduced Drake (bisexuality is the norm this season, and I’m not complaining), and was just about to kill Drake when The Countess silently stopped him. Later, it was The Countess’s turn to nearly get Drake’s rocks off and Tristan’s turn to cockblock. Poor Drake; guess his evening ended with a box of Kleenex and WellDressedDudesWithTheirDicksOut.com. The Countess revealed to Tristan that she lost all her dough to Bernie Madoff (this show uses famous people like punctuation marks) and she’s now planning to pull off a classic: marry Drake for his money, then axe him. Witness the return of the patented Finn Wittrock Demon Grin. He’s so onboard.

--Thou Shalt Not Bear False Witness. The Ten Commandments killer’s motto seems to be, “Go big or go home,” because his/her latest deed was to murder the entire staff of a gossip site and nail their tongues to their desks. Slurp. Lowe’s at his wit’s end, not helped by the fact that he keeps getting quasi-seduced by Sally and her pointy-dicked buddy, definitely not helped by Alex and her folder o’ divorce papers. To the list of possible Ten Commandments killers, I must add Tristan (unlikely, though, as he only recently learned about March) and Liz Taylor (no one suspects........the BARTENDER!). But I still want it to be Alex. Because I’m sick.

--Donovan is not a character I like very much, and it didn’t help that he hates Iris so much he wants her to die. Model son, huh. But Iris isn’t much better, as she can’t admit that children grow up and become adults. Neither one of them is in the right. And it hardly matters, because I’m more interested in Angela Bassett. Aww, yiss. She snatched Donovan off the streets for a bondage and exposition party. She’s Ramona Royale, a Blaxploitation queen in the 70s. When that dried up, Ramona met The Countess and became her vampire lover. When that dried up, Ramona fell for a studly rapper and tried to vampify him, but the rapper and all his homies got murdered by a jealous Countess, leaving Ramona thirsty for revenge. She banished Donovan upon learning he’d been dumped, and I sure hope we don’t have to wait three more eps for her return. Bassett is, of course, just playing the same role as ever (a sassy, dangerous diva who gnaws on her dialogue like rare roast beef), but in this case, I reeeaaaally don’t mind.

--You could argue that The Countess is also an overly controlling mother figure, which is why it gave a nice jolt when Ramona revealed her notion to kill The Countess’s four little children of the damned. And our other hapless mommies suffered unusual plot twists as well. Alex stormed out of Lowe’s room after spreading the blue-balls virus, was snarked at by Claudia’s ghost, and then ran smack dab into Holden. Rather chilling was the utterly blank look on Alex’s face: she loved Holden so much that she instantly knows he’s...changed. Meanwhile, Iris enlisted Sally’s help in committing suicide, swearing she wasn’t gonna stick around in ghost form. But Iris proved death-resistant enough to linger until Donovan, who’d gotten some wisdom from Liz Taylor, burst in. Unable to revive Iris in the traditional way, Donovan opened a vein and fed her his blood. Iris is now a vampire. The Countess will be mad. Probably because she thought all vampires had to be thin and sexy. Now Iris is gonna want to raid her wardrobe.

--Speaking of which...in one scene, The Countess wore what looked like a church organ on her boobs. And during the Madoff flashback, she was dressed like Cruella de Vil on African safari. Is costume commentary my new running gag?
Posted by Dang-Blasted at 3:50 PM