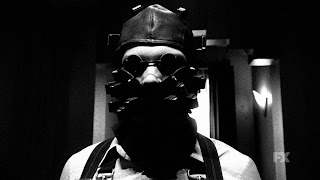 --OH MY GOD EVAN PETERS. I have been waiting SO LONG for this damned show to give him a good role again. Stop trying to make him the “everyman hero.” He does psychopaths! That’s his thing! And now he’s back in top form, having an unholy blast, elevating Hotel to new levels of excess. Keep the momentum going!

--Have the episodes gotten longer, or is it just me? Can’t complain, I guess. This ep was rather expository but featured some decent plot momentum here and there. We should, I suppose, be discussing the difference between ghosts and vampires. Ghosts are...well, yeah, I delivered a tongue-lashing last week about reusing the gimmick from Murder House. But now that I’ve thought about it, every season of AHS has the same rules in regards to spirits. You die in a particular cursed location and your ghost remains there for good. Except on Halloween, when you may roam. Coven implied this with both Spalding the butler (killed; ghost trapped in house) and the Axeman (ghost trapped in house until returned to life by magic), and Freak Show had Edward Mordrake (ghost free to wander on Halloween Night only). Now there’s Sally, who can’t leave the hotel and who is responsible for sewing undead dudes into mattresses. Except, the two Swedes seem to have died for real. Huh.

--Maybe it’s a vampire thing? The vamps of the Hotel Cortez are a mix of tropes both traditional (they don’t age; sunlight is bad for them) and newfangled (no fangs. And no pun intended). They’ve hit the nail on the head in regards to immortality: it gets boring. The Countess admitted that the only time she really comes to life is during the bright, brief periods of decadence America goes through now and then. During the late 1970s, she was queen of the disco, feeding off the night, off sex and drugs and reckless pleasure. And now...could Pandora’s Box be opening again? Will Drake used the hotel to stage a trashy, trendy fashion show. Among the models was Tristan Duffy (Finn Wittrock, yum yum), a glamorously horrible meth-gobbler, a glittery trainwreck waiting to happen. The Countess smelled Tristan’s rage, his jaded first-world frustration, and knew he was her next partner in grime. Thus did Donovan get the heave-ho, as well as a rude lesson: vampires don’t love. They only lust. Eh, I’d rather have the hypnotic Wittrock over the whinging Bomer. No offense.

--Drake’s show also set the stage for a couple more plot-related thingummies. First, we met Claudia (Naomi Campbell?!), a pouty Vogue-head who’s all set for ghastly and gruesome ordeals, I’m sure. Secondly, Lachlan Drake, who’s made the hotel into his own personal Super Mario 64 castle, took Scarlett Lowe to visit a basement swimming pool where The Countess’s four little children of the damned sleep in stylin’ coffins. Scarlett recognized her baby brother, Holden, and visited him later, snapping a haunting iPhone photo and freaking her parents all to shit. As if her dad didn’t have enough to brood about!

--Normally it bugs me when a show (or a movie, or a book) rams a social agenda down our throats. But I fucking hate the anti-vaccination movement. I hate it in ways I can’t articulate. I literally equate it with child murder. So I was very happy when Alex delivered an outraged rant to a lady whose kid was down with the easily-preventable measles. We need more of this.

--Detective Lowe, meanwhile, is sinking into the strange malaise of the Hotel Cortez. Sally got him to open up about his alcoholism (he’s seen things, man...he’s seen things), and then he got a package containing an Oscar trophy that had previously occupied the anal cavity of a dead blogger. After hearing the hotel’s backstory (more on that in a sec), he connected the dots. The Ten Commandments! They are the basis for this string of murders. We’ve seen Thou Shalt Not Steal (dead thief), Honor the Sabbath (dead migrant workers), No False Idols (Oscar up the butt), Thou Shalt Not Commit Adultery (lovers dead in bed), and Honor Thy Father and Mother (discount Menendez brothers). Five more to go, and I wonder if any of our cast of weirdos is gonna end up a victim. And who is the killer?

--Well, I called it last week. Now I may have to backpedal. While galumphing about the hotel, Tristan met an unsettling man with an icky little mustache and an accent suggesting Howard Hughes by way of Tom Hardy’s Bane. The man dragged a bound woman onto a bed and shot her. Later, Iris gave Lowe the whole sordid tale. James March (Evan Motherfucking Peters!), a self-made oilman, built the Hotel Cortez specifically to be a staging ground for his endless, savage need to murder the shit out of people. Secret rooms. Chutes for disposing of corpses. March made H.H. Holmes look like Big Bird. He hunted for new ways to kill, often while wearing that steampunk headgear we glimpsed last week. He was assisted by the maid, Miss Evers, the Harley Quinn to his Joker. His office? Room 64. When the police came a-knocking, March and Evers killed themselves, forever stamping their mad phantoms into the hotel’s woodwork. And it was March who began the Ten Commandment killings. Ahh, but how can he have continued them in the present day, being a ghost who can’t leave the hotel? And was The Countess really his wife, or are we misled?

--So the mystery deepens, and my current pet theory is that the modern-day killer is none other than Alex. Wouldn’t that be a great twist? As a private doctor, she can be in many places, and Lowe did get a text from the killer via Alex’s phone. Occam’s Razor! But we’ll see. Drake is also a decent suspect (did he buy the hotel because he hero-worships March? Hmm). And it’s kinda nice how, so far, we don’t have any utterly pointless subplots. Eh, but I’m sure they’ll be along soon.

--Two episodes without Angela Bassett is a crime. A crime, I say. It’s hard enough to deal with the loss of Jessica Lange and Frances Conroy. I get it, Ryan Murphy: you have a thing for hot white guys with dark hair. You’ve packed this season full of them. But I need a diva fix! Lady Gaga can wander through as many random clumps of marble pillars as she wants, but I’m getting fidgety for Bassett. Don’t make us wait.
Posted by Dang-Blasted at 1:56 PM