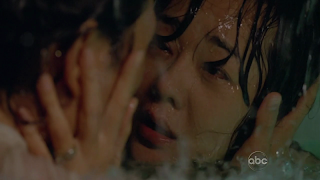 --I hate you. But then, you knew I was gonna wind up hating you eventually, didn’t you? You knew it the minute you greenlit this fucking episode. In case people somehow missed it....Sayid, Sun, and Jin just died. Spoiler alert. UnLocke is pure evil and the fools theorizing that maybe the big twist is that we should be rooting for the bad guy...well, they can fuck right off. I’ll get the really uncomfortable question out of the way first: What is it about Lost killing off minorities? I mean, they already purged the show of black people (except for Rose, who might as well be dead for all we’ve seen of her on the Island lately), and now it’s time for the Arabs and Asians to go? Kinda tactless, maybe? Now I want Miles to survive just to prove my cynical theory wrong.

--Soooo, Jack’s little abandonment of his friends last episode was all for naught, as Widmore’s new captives were busted from the Polar Bear Cages and back under UnLocke’s wing before the freakin’ fifteen-minute mark. So much for that little development. Still, it was awesome to see all the surviving (at that point) Lostaways back together! Hell, if you covered your ears to block out the dialogue, you could pretend it was Season One and Locke was his old survivalist self, and Claire had just gone without Loréal for a little too long! As UnLocke led our heroes along by their noses, Jack played the broken record by constantly whining that he wasn’t leaving. UnLocke “discovered” some explosives on Flight 316 and led his band to the sub instead, which they captured with suspicious ease. In the process, Kate got shot and Claire got left behind but Jack managed to give UnLocke the slip and board the sub himself. Yay, the good guys win? Only...why does UnLocke have his most demonic leer on?

--As anyone could guess who was paying attention to backpacks, our heroes found they’d brought along an unwelcome extra passenger: the explosives. In a nicely tense scene, Jack tried to talk everyone else out of defusing the bomb, pointing out that UnLocke apparently cannot kill any of them....but they can kill each other. Sawyer wasn’t buying it; he tried to diffuse the bomb and wound up dooming half the main cast. Sayid took the fatal fall, running the bomb away after revealing that Desmond was still alive, duh. I called Sayid’s death. I also figured Frank would die and he (presumably) did, though I’m kinda fucking pissed that the show NEVER FUCKING DID ANYTHING WITH FRANK THIS SEASON. I rather LIKED him and would have liked to see him do more than STAND AROUND IN THE BACKGROUND AND MAKE THE OCCASIONAL WITTY ASIDE. Again, show, FUCK YOU.

--See, the problem is, this episode was overall really good. Like, gripping and dramatic and drenched in the best kinda irony. Which makes it sad that I have to hate the ep. How can I not hate it? As the sub sank, Sun was trapped by wreckage and Jin refused to leave her, and so they went down together. Hey, Lost viewers, that wound looks nice and raw and bloody, but maybe it could use a little salt. Here, have a shot of Jin and Sun’s lifeless hands drifting away from each other! That should perk ya right up! What’s that? You’re crying? Awww, don’t cry! Here, have a dead puppy on a stick! Seriously, show, I hate you. Yeah, they get to live happily ever after in the flash-sideways. Yeah, it would’ve been arguably more cruel to leave one of them alive and permanently guilt-stricken. But still. Also, WHY DID THEY SPEAK ENGLISH AT EACH OTHER? Do you really think we’re so dumb that we’ll take character inconsistency over reading subtitles? Grrrrrr.

--And in the slightly less horrific flash-sideways, Jack offered post-surgery Locke a new procedure that might fix his legs, but Locke refused. So Jack, meddling wannabe fixer that he is, did some research (hi, sideways Bernard!) and found his way to Locke’s evil dad, Anthony Cooper. Only sideways Cooper ain’t evil, on account of being a vegetable in a wheelchair.....courtesy of Locke, who talked his dad into a maiden airplane flight and promptly crashed them both into oblivion. As we see, irony is being applied with a paintbrush here. Hell, Jack even got to tell Locke, “I wish you’d believed me!” Pretty slick flash-sideways, and I like that they’re giving Claire lots to do, even if she still is kinda dumb. That music box that Christian bequeathed to her....were we supposed to recognize it? Apart from the “Catch a Falling Star” shout-out, I wasn’t sure of the significance. But it was amusing to see sideways Jack slowly crumpling under the weight of so many coincidences. Something tells me he’ll be nice and malleable when sideways Desmond tracks him down.

--So, yeah. Fuck you, show. You killed off some of our favorite characters, and even though it was inevitable that major heroes die at some point, that made it no easier. YOU MADE HURLEY CRY. There is no worse offense. When Hurley cries, the universe cries with him. You should’ve put this episode before the hiatus week so we’d have time to stop loathing you. As it is, I’ll be approaching next week’s ep with wounds that are still very raw. Can’t wait for the next load of salt to be rubbed into them! What’ll it be -- Kate dying of infection while Jack and Sawyer scream at each other over her corpse and Hurley accidentally shoots Vincent?

--One more thing to be pissed off about: Sayid’s last words were, “It’s going to be you, Jack.” I’m hoping that doesn’t mean what I think it means. Because I REALLY don’t want Jack to be the winning Candidate. It’d be so predictable and obvious! It needs to be Sawyer, dammit! SAWYER. Kate probably agrees with me; why can’t you?
Posted by Dang-Blasted at 3:38 PM