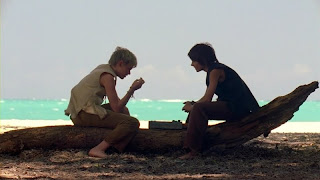 --Once upon a time, there was......wow, where to begin? With the Island, a physical receptacle for something divine and unknown? With the woman who served as its protector and knowingly damned herself? With the brothers who failed....or the brothers who succeeded? It’s all woven together into the myth, the myth of the Island and, just maybe, all humanity. Golden light and churning smoke. Black and white stones in a leather pouch. “Our very own Adam and Eve.” Oh, Locke, you spoke more truthfully than you ever knew. Wow.

--This episode forms the counterpoint to the earlier “Ab Aeterno.” In that ep, we saw the mystery of the Island and its dueling twin entities through the eyes of the outsider, the mortal man. Now, we see through the insider’s eyes, and much (though not all) is revealed. It began much as the Season Five finale did, with a sequence made confusing because we were meeting people for the first time. The mothers: one, the physical mother, a Roman (?) maiden named Claudia washed up on a strange shore. Second, the spiritual mother, whose name we never knew, but who was already there, waiting. Played rather unexpectedly by the wonderful Allison Janney, this Mother helped Claudia give birth to twin boys -- and then murdered her in an act as shocking as it was unsurprising. Twins: Jacob and....the other. “I only picked one name,” Claudia gasped, and so the younger, darker brother went nameless. For real, I think. I don’t think they were just withholding his name from us, I think Jacob’s brother literally has no name. Again, shocking and oddly...appropriate.

--So the boys grew up, Jacob content with his lot in life while Younger Brother’s azure eyes turned outward, toward the horizon. He was never content with his mother’s assurance that there was nothing else out there. Some part of him knew it had to be a lie, or at least a misconception. They spent their days in Eden, chasing boars and playing a game with black and white stones, a game the Mother gave to the Younger Brother, for he was her favorite. I liked these sequences; the two strapping tweens they got to play the brothers did fine (man, what a dream role for an aspiring young actor!), and we now know that the young boy UnLocke keeps glimpsing in the jungle is Jacob, some ghost or memory of him as a youth. I wonder what Island force is causing him to appear....it was implied that the Island does indeed hold some strange sentience. After the brothers saw real people for the first time -- others from Claudia’s ship, now settled on the Island -- the Mother was forced to reveal her hand; she brought the boys to a beautiful glade, with a waterfall and a cave....and a golden light, spilling forth from somewhere underground. That light is the key. “Life, death, and rebirth.” The exact nature of this life-force may remain once of the true mysteries of Lost; what’s important is that the Mother knew one of her sons would have to replace her as its guardian....and it was clear she hoped it would be the son who wore black.

--It was not to be. The ghost of Claudia appeared to the Younger Brother (more evidence for an Island mind?) and showed him the truth. Furious and determined to find his real home, he left his fragile little family and grew to manhood with the outsiders, despite his contempt for them. He and Jacob stayed close, and continued to play their games, until Younger Brother found his way out: a new entrance to the source of that golden light. To harness it, he built a wheel. Oh, yes, a wheel. He was planning to unlock forces he could not understand, and so the Mother foiled his plan. She was forced to accept that her favorite had failed, and so it was Jacob who got the gift of immortality and the responsibility that came with it. What a bitter cup of wine for Jacob to swallow, knowing that, despite the meaningless reassurances from his mother, he was always the back-up plan, the secondary. Ahh, and how significant to the overall Lost mythos! We felt the Younger Brother’s pain. Even after he discovered that his path to the Wheel was erased and his people killed, even after he murdered the Mother in a fit of passion, his actions were guided by sorrow. Something that is inherent to all men. Only....we’re not dealing with a man any more, are we?

--Yes, the crux of it all. The revelation. Equally sad, equally enraged, Jacob proved why he was not the preferred choice for Island guardian. Despite his mother’s warnings, he dragged his brother to the cave of golden light and flung him inside. And from that light, two things emerged: a pillar of angry black smoke.....and the body of the Younger Brother. Separate entities. Jacob was left to place the bodies of his two loved ones in a cave, along with the two remaining black and white stones from the Younger Brother’s beloved game. And, centuries later, someone would find them and wonder, not knowing, not suspecting.....

--Wow. Some may hate the vague, spiritual nature of the Island’s lifeforce, but I dug this episode so hard. I’m gasping at the big revelation: the Smoke Monster, the Nemesis, UnLocke....it is not Jacob’s brother. It never was Jacob’s brother. It took his form, his voice, perhaps his memories, but it is something else, something conjured up from that golden light. The yin to the yang, the darkness to the light. It is no more Jacob’s true brother than it is John Locke. And that makes everything so much more terrifying, the stakes so much higher. Our heroes are fighting something formless and unspeakable, the personification of evil. And Jacob, poor Jacob, under his immortality and wisdom and endless patience, was always just a man. Just a man, like the rest of us. And I doubt there’s going to be a saintly avatar of goodness emerging from that golden light. It’s mortals pitted against the darkness in all our souls. If we want to stop it....we have to be the golden light ourselves. It’s the best we can do.

--So, having been amazed by all this, I can bite my nails for two more weeks of this show I love. Next week’s ep will set it all up...and then, the finish. I can scarcely believe how far it’s all come.

FINAL DISCLAIMER: A day has passed, and I still love this ep. However, from reading the forums and whatnot, I can tell that this is turning into one of Lost’s most polarizing episodes ever. I can understand that. A lot of fans want something more coherent than a cave of magical light and a bottle of wine that somehow grants immortality. Doesn’t change my feelings, though. The way I see it, there are two major types of Lost fans: those who came on board with the assumption that the show would end how they wanted it to end, with everything neatly explained and tied up in a perfect narrative bundle.....and those who came on board, realized what kind of crazy, frustrating, brilliant ride they’d signed on for, and decided to just hold on tight and roll with it. I am part of the latter category; Lost has already earned my love and respect, and (unless they go so far as to pull some kind of “It Was All a Dream” cop-out) I will accept whatever conclusion they throw at me. Because, for pulling off a story like this, they’ve earned the right to end it on their terms. And if we love the show, we should find the grace and patience to accept that.

Oh, and to anyone who thinks they want a rational, pseudo-scientific explanation for all the mystery and mysticism of Lost, all I have to say is: Midi-Chlorians.
Posted by Dang-Blasted at 11:11 AM