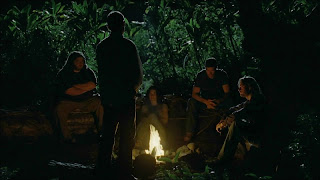 --Not sure how much I like this episode. Maybe I should be more forgiving...I mean, I recognize its quality and it had some downright awesome moments. I think I’m starting to get freaked out about the series finale, to the point where I’m being overly harsh. Also, “set-up” episodes bug me. This is, of course, the last set-up episode that Lost will ever have, but still. The stage is set for the big finish; the characters know more or less where they’re going and what their goals are, and so do we. Oh, there will be last-minute twists and turns, or so one assumes. But the end is on the horizon. To our chagrin.

--Things were moving right along in Timeline LAX, where Desmond, I swear, has become Professor X. Seriously, he’s doing the whole “I’m here to unlock your potential and recruit you for an amazing task, and by the way, I already know everything about you” thing so well! All he needs is to steal Locke’s wheelchair and shave his head. But for now, he meddled in the affairs of a bunch of people -- he prank-called Jack about Christian’s missing body, he beat up on Ben, and he sprung Kate and Sayid from the slammer with the help of Hurley and (hilariously) an oblivious Ana-Lucia. It all seems to be coming down to the big concert where Jack’s vampire son will play. What will happen that night??!!! Is there any remaining hope that Jack’s ex-wife won’t be Juliet???!!! Is Lost going to rip off that opera house business from Battlestar Galactica???!! Oh, and Locke’s starting to think that he was wrong and Jack was right. Will Locke walk again???!!! And what other familiar faces might we see at the concert???!!! Yes, I’m excited.

--So, yeah, it’s Jack. Jack is Jacob’s replacement, barring some last-minute switcheroo, which seems impossible given that Jacob seems to have flown the coop for good. After summoning Jack, Kate, Hurley, and Sawyer for a poignant fireside chat, Jacob did the whole mystic communion deal with the former man of science, and I guess that’s that. Lame. Good scene, though. I liked seeing Sawyer’s intense guilt and Hurley’s smart detachment (“I’m glad it’s not me” -- and so are we, Hurley!). Also, interesting that Jacob crossed off Kate’s name because she became a mother. Mommy issues much? Kate was less annoying than usual and Mark “Jacob” Pellegrino has never been hotter, but I felt like Jack rose to the occasion too easily. Also, the dialogue never really answered the question of whether or not Sun, Jin, Sayid, and all the other dead ones had to die. Did Jacob know they would? How much was him and how much was his evil brother? Meh, I guess I’ll have to be satisfied.

--Whoa, Ben’s gone all Snape on us! That is, he has us wondering if we should be howling for his balls on a platter or congratulating him on successfully hoodwinking the Island’s very own Voldemort. He, Richard, and Miles met with Widmore and Tina Fey in the barracks and might have hammered out a deal, but then UnLocke appeared, and...
--MILES ran like the hilarious coward that he is. I so hope he survives, because he’s worked so damn hard at saving his ass. Spare the comic relief!
--RICHARD tried to stand his ground and got body-checked by black smoke. Is he dead? The show had better give us some closure on him. While we’re on the subject, Frank didn’t even get mentioned, so either he’s still alive (maybe Claire will rescue him?) or they’ve utterly failed to do the character justice.
--TINA FEY was murdered by UnLocke. Brutal, yes, but did you really expect a recurring character to be allowed to live at this point? Bye, Tina Fey! Loved you on SNL with Betty White!
--WIDMORE revealed his Desmond gambit after UnLocke threatened to kill Penny. It’s kind of appropriate that Widmore so utterly failed, because his character is all about failure: he can be rich and powerful, but he can never obtain the things he truly wants. Because he is weak. And now dead.
--And finally, BEN put his lot in with UnLocke, betrayed his companions, and agreed to kill our heroes. Or did he? I just can’t believe that Ben’s sunk back into darkness, not after his redemption earlier. I think that Ben’s pulling the wool over UnLocke’s eyes and will reveal his true noble intentions at the crucial moment, probably dying in the process. Yes, he shot Widmore, but that moment was the culmination of the hatred between the two men, and was fully earned on Ben’s part. “He doesn’t get to save his daughter,” Ben snarled, and who can forget Alex’s pitiful death at the hands of Widmore’s man? No, Ben’s not a lost cause. Because sideways Ben is getting all cozy with the foxy Danielle Rousseau! Predictable, yes, but nicely ironic and also fully earned. So don’t write Ben off just yet, folks....

--Where does all this leave us? With the newly immortalized (?) Jack and his friends heading toward the golden light at the heart of the Island. With UnLocke plotting to destroy the Island entirely. With Desmond, the lynchpin that both sides need, out of the well and missing, rescued by.....whom? With some characters unaccounted for, others out of the running, and a select few ready to wage the final battle that will decide the fate of Craphole Island, not to mention this flawed but precious blue ball we call home. Not much to say, then, except.....here we are, and here we go.
Posted by Dang-Blasted at 8:03 PM