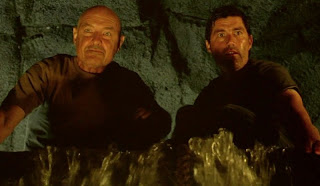 --It’s taken me awhile to begin writing my recap/review/reflection on the finale of Lost. I’ve had to do some thinking. Normally, I try to write an episode recap/review right away, while it’s still fresh in my mind and I haven’t been influenced by what anyone else thinks. (Case in point: I might’ve been a lot more critical of “Across the Sea” if I’d waited to see the backlash.) But this is The End, folks. I can’t just bolt it down like a Happy Meal; I need to digest it like a gourmet dinner. And many of the things I’ve read that other people have said or pointed out...they helped me form my own conclusions. And because it was so huge and required such thought, I’ll be doing this in two parts. Part One examines the climactic events on the Island, while Part Two will be all about the sideways world, what it is, and what it meant for each character to be there.

--So, yes, I loved the finale. Was it perfect? No, of course not. How could it be? How could six seasons be neatly wrapped up in one two-hour block? Plenty of questions were left unanswered and new ones were raised. But, as others have pointed out, Lost is about its characters, its people. That was what they wanted to address in the finale -- the characters we know and love. How much time would be left for character closure if they’d used it all up meticulously explaining every tiny, pissant mystery? The final clash between our heroes and UnLocke was thrilling and intense, and intensely personal. As it should be.

--The images of the Island....so beautiful! UnLocke standing on the edge of a rain-swept cliff like the last man on earth. Kate peering through a tapestry of brilliant green fronds like Eve herself. Frank rising from the waters like Jonah (oh, how I cheered!). Two faces gazing down into a golden chamber in a shot that deliberately echoed the famous Hatch zoom that ended Season One. A bamboo grove, peaceful and isolated. A plane. A dog. An eye. And then.....

--Getting way ahead of myself here. The gorgeous cinematography echoed the theme of the show, the duality and life and death, creation and entropy. UnLocke was the agent of destruction and chaos, determined to destroy the Island and tip the world off its precious balance. Jack was the hero and the shepherd, making the ultimate sacrifice. And Desmond was the tool, the weapon, his special connection to the Island’s energy rendering him immune to the deadly effects of the Core. Both sides needed him, but both Jack and UnLocke realized that there was literally nothing they could do but lower Desmond to his destiny....and see what happened. What a beautiful, wicked moment -- the two men, so completely transformed, enemies, yet equally enticed by the promise of that golden light, that Core. And Desmond, serene because he was convinced that once he did his deed, he could escape for good, one way or the other. But it didn’t work that way. Once Desmond pulled forth the stone plug, what came out was not golden and healing but crimson and malevolent. The Island began to shake itself to pieces, and UnLocke discovered he’d become mortal. Why? Perhaps because, as the Monster, he had always been connected by an invisible lifeline to the power of the Island, and when the cork was pulled, that link was severed. He was part of the Island itself. His victory was his downfall.

--Ah, but it wasn’t just Jack and UnLocke, was it. Sawyer, Kate, Hurley, and Ben had to be there as witnesses. Why them? Well, who else? So much of the show has revolved around Kate and Sawyer’s love and stubborn determination, Ben’s search for meaning, and Hurley’s deep, seemingly endless compassion. All were central and all were addressed. I loved it when Kate joked about tagging along with Sawyer; that moment alone made me forgive a lot of her past idiocies. I did find it weird that no one confronted Ben about seemingly siding with UnLocke, or even mentioned it. I suppose that when the shit hit the fan, everyone was appropriately shocked and awed to throw their differences aside -- and like I said earlier, Ben was just following UnLocke to keep himself alive, not because he harbors any remaining animosity towards the castaways. Ben is a follower, not a leader, and so his role helped foreshadow what was to come. And thank you so much, show, for bringing back Rose and Bernard! Yes, they too flashed back to the present and are still living quietly on the Island. When they rescued Desmond, they inadvertently brought UnLocke to their door, and yeah, for one horrifying moment, I thought the writers might be that mean. But, no, Rose and Bernard are safe. Their love for each other is just as vital to Lost as any other love. They are the keepers of truth.

--Miles, Frank, Richard -- wonderful. Yeah, they mostly played a functional role in the ep, getting Flight 316 ready to fly. But were they unimportant? Never. They represented the common man, the humble everyperson who does the right thing, helps when help is needed, but is practical enough to keep his or her own skin intact. They each had their moments. Richard found a gray hair, a sign that the tired old ways are changing -- and, judging by his reaction, he’s more than ready. Miles proved that under his cynicism and hilarious assholery, he’s a decent human being. (He also got away scot free with those diamonds, and I couldn’t be happier.) And Frank, well, he did what he’s always done. He flew the plane. “Here we go,” the pilot whispered as he coaxed the battered, scarred hulk of 316 down the runway that the Others had built without even knowing why it was so important. It was important because good, everyday people like Frank and Richard and Miles are what keeps the world together, but even they need help from others. Everyone helps everyone.

--So....a final, brutal battle on that haunted clifftop. A fatal wound for Jack, a stigmata. But who killed UnLocke in the end? Kate. Kate, the rejected candidate, the criminal, the mother. A provider of life, here to take it away. With the Younger Brother’s long, sad, broken excuse for a life brought to its end, Jack went to do what he realized he was supposed to do all along: die. But die so that others might live. Jack dropped back into that beautiful, deadly Core and, like Frank, did what he does, what he’s always striven to do. He fixed. And who was left to take on Jacob’s duties? Oh, God....I laughed and I cried. Hurley. Poor, kind, reluctant Hurley was the right one all along. I used to hate the idea that Hurley might be the new Jacob, but in the context of the finale.....who else, really? Jack is the fixer. Kate is the mother, with the mix of life and death that entails. Sawyer is the father, the strong provider. And Hurley, what does he do? He takes care of people. That was what Jack realized: that though you may spend your life attempting fix people and sometimes even succeed, it does them no good unless they are cared for. Now things will be different. Jacob kept the Island together, but it was never meant to be his job, and he knew it. His rule, his role, was flawed. But maybe, just maybe, things will be better with Hurley in charge. Not just on the Island, but among all humanity. And Ben, who has realized the truth about himself and a lot of other things, gets to be Hurley’s loyal and experienced right-hand man. The way it was meant to be. Everything falls into place. Everyone finds their proper role to play, and all is well. Or as well as can be when we’re talking about the ever-changing mix of love and loss that is part of every human being.

--I’m not going to talk too much about the final moments on the Island, because I feel it makes more sense to discuss them in relation to the final moments in the sideways world. That comes in Part Two. But I will say that another huge Lost theme is the Cycle, and those final, quiet, tragic, triumphant moments in the bamboo grove brought everything to its proper...beginning. And no one has to die alone. And death need not be mournful, especially when the sun is shining and a gentle breeze is blowing. And when they assured us that Vincent would still be alive at the end, we had no idea of the significance of that statement. Because, hey, Vincent also did exactly what he does. And what does he do? Oh, come on. Do I really need to answer that?

--So, the Island still stands. Some stayed, some left. I am sad that we’ll never know what happened to our heroes next. What did the passengers on the final flight of Ajira 316 do once they returned to the real world? Did Sawyer and Kate make a life together? Did Miles become a millionaire? Did Richard find the life and death he’d been denied for so long? Did Claire finally become a mother? (I didn’t mention Claire earlier because her final scenes on the Island speak for themselves, but I’ll touch on them in Part Two.) And what about those who stayed behind? Did Desmond make it back to Penny and little Charlie? Was Hurley a good leader? Did he round up the scattered remnants of the Others and the original 815 castaways (assuming any of those poor redshirts survived at all) and build a better society? And, when all is said and done, what about Walt? We’ll never know. Though this pisses me off a little (the sneaky bastards promised Walt would appear, and he did....in archival footage. Fuck you, Darlton), I’m happy to see that I still have the grace to accept what I cannot control. And besides, now we can all imagine the lives our heroes had, and imagine them in the way we prefer.

--Except for Jack. Because Jack died. Just like he was always meant to. And his death, and the idea of turning back the clock and remaking your life how you want, or think you want, ties directly into the revelations about the sideways world and the other big conclusion to Lost. So stay tuned for Part Two...and my final thoughts on the finale.

--(Not necessarily my final thoughts on Lost, though.)
Posted by Dang-Blasted at 9:28 AM