I love boss battles. If done well, they are the whipped cream and cherry atop the sugary sundae of the game. Seriously, the best reward for completing X amount of gameplay is to be faced with a big, pissed-off adversary looking to fuck up your day, and then having to topple them without getting splattered all over. How satisfying! For me, the ideal boss should meet the following criteria: it should be unique, it should require the skills you’ve learned playing the game, there should be an element of strategy to the fight rather than just frantic button mashing, it should be challenging but not pointlessly frustrating, and you should feel good about yourself after beating it. Bonus points if it’s just really fucking spectacular. A boss need not fill ALL the above conditions in order to be a fave of mine, but it sure helps. Here are...

(Note: I don’t think I could rank these in order of preference, so they’re just in alphabetical order.) 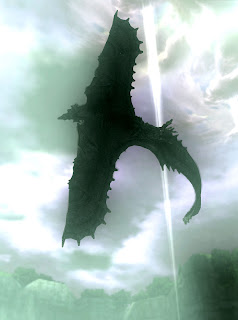 Avion (Shadow of the Colossus, PS2)
Shadow of the Colossus is my favorite video game of all time, ever. And the entire game pretty much IS boss battles, so which one to choose? They’re all good, but I have to go with Colossus #5, the great eagle. This fight managed to be both spectacular and poetic, as you swim through a drowned city, attract Avion with arrows, then cling desperately to its back as it swoops and twirls above the ruins. After the first four colossi stayed predictable, Avion showed that the game was going to take the concept in all different directions and surprise you with each new foe. Noble, elegant, and tragic, the eagle raised the bar high for successive battles.


Colossus of Rhodes (God of War 2, PS2)
Everyone said, “How the hell can God of War 2 top the incredible Hydra battle that opened the first game?” Then our jaws hit the floor as a pissed-off Zeus magically animated the Colossus of Rhodes, and Kratos found himself tear-assing through the burning city with a 100-foot tall bronze pretty boy on his heels. How badass is a game that has this as its freaking tutorial sequence? My testosterone levels went through the roof as Kratos launched himself from a giant crossbow to tear the statue’s eyes out, it retaliated by flinging live soldiers at him, and then, just when you thought things couldn’t get any more intense, our hero found himself inside the damn Colossus, sabotaging its iron guts. Whoa. Just whoa. Why can’t all games start like this? 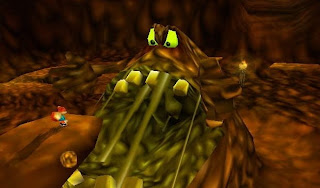 The Great Mighty Poo (Conker’s Bad Fur Day, N64)
Juvenile? You bet. But this improbably funny boss fight should be the standard for all scatological humor. It’s a giant, sentient mound of scat. That sings. In fact, he sings pretty well, and serenades our furry hero in a resonant bass while trying to subject him to a messy fate. The battle itself is pretty basic: you run, you dodge flying poo balls, you fling rolls of toilet paper into the GMP’s maw when he pauses for more operatics. It’s all in the presentation....the gross, tasteless, and awesome presentation. Oh, and when you defeat him? “I’m flushing! I’m flushing! Oh, what a world!” Excuse me while I poo myself laughing. 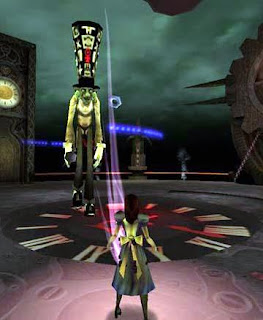 The Mad Hatter (American McGee’s Alice, PC/Mac)
Picture a tall, gaunt, decrepit old coot who shoots poison syringes from his fingertips and explosive mortar rounds from his top hat. Picture fighting him on a dizzying platform in some sort of nether space as giant gears and watches fly by. Picture some robot minions as well. If this sounds awesome to you, why the hell haven’t you played American McGee’s Alice? The Mad Hatter’s entire trippy, fucked-up realm was my favorite part of the game, and the boss battle with the old bastard did not disappoint. Also, remember how I like boss battles to end in a satisfying manner? When you beat the Hatter, his head explodes. Now that’s bloody satisfying, chaps. Being a polite Victorian teenage girl was never so manly. 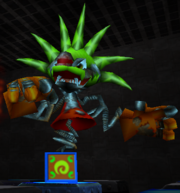 Mad Jack (Donkey Kong 64, N64)
I love all the ginormous, creative bosses in this and other Donkey Kong games, but the prize must go to Mad Jack, a psycho jack-in-the-box who is also a duck. It’s like Ducktales meets the Insane Clown Posse. You fight him on a grid of tall pylons, helicopter-spinning frantically as he chases you, then pounding the correct switch to give him electric shocks. He shoots fireballs and lasers, then turns invisible. This deadly game of leapfrog was challenging, unpredictable, and way too much fun. The DK franchise has always had a slightly demented aesthetic, and the cackling Mad Jack personifies cartoon psychosis. 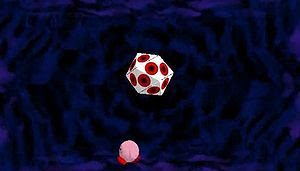 Miracle Matter (Kirby 64, N64)
I have no clue what this boss was supposed to be, but that’s Kirby for you. What matters is how fun it was. Miracle Matter appears to be a giant floating dodecahedron covered in red eyes, and it morphs into seven different forms that correspond with the seven powers Kirby can steal. So it’s basically seven battles in one, as each form moves and behaves totally different. Button mashing won’t work; each form is only weak to one ability. Kirby must think fast, memorize patterns, and be ready at all times, since you never know what the boss will turn into next. Surprising, that a cutesy game starring a fat pink marshmallow could stimulate the gray matter so much. 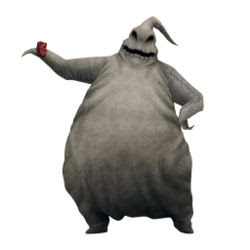 Oogie Boogie (Kingdom Hearts, PS2)
Kingdom Hearts is a button-mashing kinda game, and most of its boss battles were confusing particle-rendered clusterfucks. Leave it to a giant sack of bugs with a great singing voice to provide the one really interesting boss fight. Oogie Boogie traps the game’s heroes on his rotating roulette wheel of pain and flings all kinds of death at them -- swords, saw blades, you name it -- while you attempt to pound the right button that will give you access to the evil bogeyman. Aww, yeah, strategy and timing galore! And then, after you apparently defeat him, what happens? He fuses with his house to create a gigantic freaky tower of sentient doom, which you must climb all over, sabotaging its weak spots. Thank you, Tim Burton, for injecting so much cool into what could have been a kiddie game. 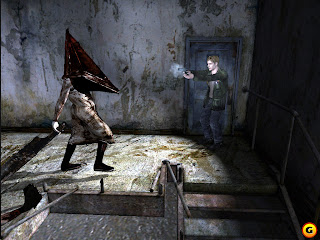 Pyramid Head (Silent Hill 2, PS2)
The first time you see Pyramid Head, he’s standing behind a metal gate, just....looking at you. Therein likes the creepy effectiveness of this knife-wielding, metal-headgear-sporting demon: most of the time, he’s just....there. He has a habit of appearing with no warning, and the “battles” with him consist of you just trying to avoid him, often in a dark and claustrophobic space. Yeah, we’ve heard all the rape jokes, but guess what? Play the game again, and Pyramid Head is just as scary, brutal, and mysterious. While most bosses advertise their strategies and weaknesses, he gives nothing away. I could spend hours debating Freudian symbolism and psychological subtext, but the important thing is that Pyramid Head scares the fuck out of me in the best of ways. 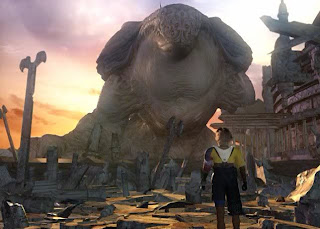 Sin (Final Fantasy X, PS2)
Okay, I’m finally getting around to a Final Fantasy boss (Kingdom Hearts does NOT count, dammit). You should know what I’m talking about here. Sin was a great video game nemesis, huge and ugly and lethal yet strangely poignant. I love that the game teased us for awhile before showing us what Sin looked like, and when the titanic creature took to the skies over the land of Spira...shock and awe, man. Shock and awe. The big battle with Sin takes place hundreds of feet up, with our band of heroes hunkering on top of a speeding airship and eventually hopping onto Sin itself. The great music and camera swoops were all epic and cinematic, the battle was dynamic and interesting, and this was everything a final fight should be. Of course, since this is a Final Fantasy game, there were like five or six more final fights after the Sin battle, but I don’t think any of them topped the big ol’ arial smackdown that preceded. 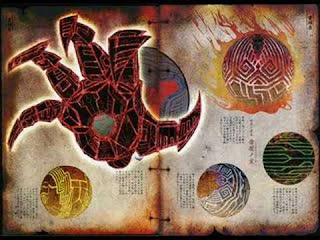 Yami (Okami, PS2/Wii)
This one actually was a final boss fight, and damn if it wasn’t fun and challenging. After hearing so much about Yami, the Evil Demon Lord of Deadly Doom, we finally meet him, and he is....an angry little fish inside a giant robot sphere? Wait, isn’t this game set in ancient Edo? Oy, gotta love the Japanese. Anyway, the fight begins with Amaterasu the wolf losing all her powers, so you have to win them back over the course of the fight. This is a total dick move, but Okami made it work somehow. Meanwhile, Yami takes on several different forms, all of which must be fought differently with different regained powers. The fight goes on for awhile, but it’s awesome from start to finish, with moving platforms, fire, lightning, acrobatics, and a gay dude playing a flute. Yeah, even the gay dude playing the flute is badass. What a great climax to a wonderful game. And I bet you didn’t know that space aliens fucked up medieval Japan! Actually, it explains a lot.
Posted by Dang-Blasted at 8:10 PM