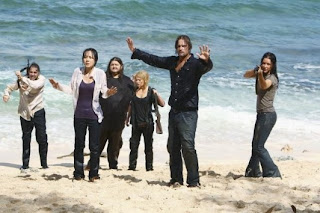 --Okay, here we go. Locke and Sun arrived at the hospital at the same time and Sun freaked out upon seeing Locke. Sawyer and Kate flirted like crazy until Sawyer went with Miles to bust Sayid, wanted for murdering Keamy and Co. Sayid tried running and failed. Desmond got in Claire’s face at the adoption agency and dragged her to talk to his favorite lawyer, Ilana, who was amazed to see the very woman the Shepherd family had been looking for! Jack arrived with his vampire son and met Claire, was shocked to learn that he had an illegitimate sister. Then he got called back to operate on Locke, whereupon he recognized the bald dude from LAX. Also, Sun’s fine and so is her unborn babe, yay!

--Wrote it all in one breath. Yeah, that was pretty much everything that went down in Timeline LAX, where a Series of Un/Fortunate Events occurred to place all our heroes in each other’s trajectories. Yep, they’re hurtling towards each other like a freight train; Desmond barely needed to do any work! It’s like he knows exactly which thread to tug, which person to nudge, to get the wheels spinning. Hurley was missing from the action....but then, he’s already had his epiphany, hasn’t he? I wonder how all the others will have theirs, and what’s gonna happen when they do. I mean, Timeline LAX has to be leading somewhere big, right? Some huge event that’s gonna rock both timelines, right? It had better, because I’m sick of being teased. This episode was rather teasing, one of those eps where a lot happens but most of it is pointless, mere setup for events to come. Four eps left, guys! Make all this count!

--The “Last Recruit,” by the way, is Jack. This was made kinda clear at the beginning when UnLocke immediately honed in on Dr. Shepherd and took him off for some casual chitchat, which is UnLocke-ese for “manipulating the fuck out of your meaty skull.” To seal the deal, Claire cozied up to Jack as well. So when Sawyer put his sub-snatching plan in motion, Jack just wasn’t buying it. More than ever, he’s walking the way of True Locke and has determined that they can’t leave, not without doing whatever the hell it is they were always meant to do. Sawyer managed to recruit his own band of runaways, though his attempt to leave without PsychoClaire was foiled. Kate, bless her, had one of her rare tactful moments and played the remorse card to Claire, who seemed to buy it, at least for now. I dunno, though....it’s hard to take the jungle out of the Nouveau Rousseau.

--Is Desmond dead? Naaaaaahhhh. I didn’t believe it when UnLocke tossed him in the well and I don’t now. After Tina Fey showed up to demonstrate Widmore’s ability to make things blow up spontaneously with no apparent weapons (either that or they ran out of budget and can’t depict missiles), UnLocke sent Sayid to put an end to Desmond. However, Des -- looking bloody and rattled but still rather zenlike -- tried talking to Sayid, asking him exactly how he’s gonna explain to his beloved (IF UnLocke can bring her back) what he’s done to reunite them. And we didn’t see Sayid’s reaction, though he later told UnLocke he had indeed done the dirty deed, and UnLocke did not call his bluff. Sayid’s totally lying. As Hurley tried to explain with more tortured Star Wars analogies, there is still good in the man! Notice how in both timelines, Sayid is coming to terms with how he can never be with his dear Nadia. A step in the right direction, I hope!

--Two more mysteries to check off the list: the nature of Creepy Ghost Christian (it was the Nemesis all along, duh) and Ilana’s last name (Verdansky). Verdansky? Funny, she doesn’t look Druish.

--Finally, the moment we’ve all been waiting for....Jin and Sun’s reunion. And, sigh, not as good as I’d hoped. I mean, yeah, it was heartfelt and tearful and all, but after all this damn waiting, I wish they’d lingered on it a bit more. They’ve been apart for THREE BLOODY YEARS! Give them a nicer moment, preferably one in which they’re not being ogled by like everyone on the Island and his brother! Oh, and now Sun’s got her English skills back, how touchingly symbolic. Feels like a gimmick to me, something they stuck in at the last minute. And, of course, they don’t get to be safe or happy because Widmore’s proved his dickishness by ordering his Mad Geek Squad to take our heroes prisoner. You know what that means! POLAR BEAR CAGES! WE’RE BACK IN THE FUCKING POLAR BEAR FUCKING CAGES! WHAT A GOOD IDEA, WRITERS, TO RELIVE THE WORST PART OF LOST EVER! Ahhh, well, it can’t be for long. Maybe Richard, Ben, and Miles will ride in to save the day, or maybe Widmore just thinks he’s doing it for their protection. I have to wait two weeks to find out, so I guess we’ll just sit around and fidget until we learn what comes next, with most of the good guys caged and the bad guys exchanging fire. Wheeeeeeeeeee!

--Jack went back to the Man in Black. Jack went back; he’s got that knack. Please, Dr. Jack, fix poor Locke’s back!
Posted by Dang-Blasted at 1:16 PM