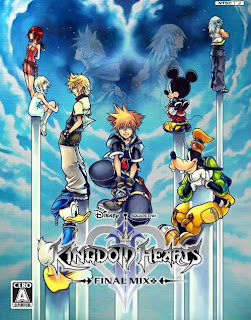 I beat Kingdom Hearts II.....go, me! Did I get one hundred percent completion? Of course I fucking didn’t! Because I am not the type of obsessive gamer who can’t live with himself if he doesn’t find every secret, max out every stat, unlock every unlockable, and beat the game on Horrible Rape Mode. I have absolutely nothing against people who ARE that obsessive...in fact, I admire their dedication. I can never be them. And I’m okay with that.

Overall, KH2 was a good game that improved on some stuff from the original. Yay for skippable cutscenes, Quick Time Events, better item management, a streamlining of that whole Moogle synthesis business, and a cooler-looking Gummi Ship mode! Unfortunately, some things actually went downhill in ways I did not expect. First and foremost...the game is easier. A LOT easier. I am measuring this based on how many times I died or failed at something. You know how many times that happened? Four. FOUR. I only died during one boss fight, the very last one. In KH1, some of the boss fights were damn hard and I had to try them multiple times, plus develop an actual strategy. In KH2, I won every boss fight by spamming the attack button and occasionally healing myself. I’m bad at multitasking during battle so I barely used magic, summons, or special forms. And I DID NOT FREAKING NEED THEM.

I’m sorry, but I believe a game should at least require you to play smarter rather than harder. You can beat this whole game by mashing X endlessly, with an occasional Triangle. Also, they removed certain fun side-questy things, like finding the trinity marks or collecting the 101 dalmatians, and even got rid of the special moves that allow you to access remote platforms for treasure chests, thereby giving you no reason to revisit old levels. To compensate, the contrived storyline forces you to visit each world twice. I call that clumsy. Why dumb down what doesn’t need dumbing down? The game’s dumb enough already.

See, my biggest overall issue with this franchise is that the separate parts of the game don’t gel at all. The Final Fantasy/JRPG stuff is utterly disconnected from the Disney stuff. The side missions and minigames have no relevance. The Gummi Ship stuff is literally its own game, and I didn’t even bother trying to build my own ships or complete Gummi missions because: what does it have to do with Kingdom Hearts? Bloody ZILCH. Also, the plot is so...so....so....stupid. It brings contrivance to a whole new level. When it’s not forcing syrupy friendship-related nonsense down our throats, it’s awkwardly trying to shoehorn the plots of Disney movies into the space provided. Hey, let’s revisit the story from the Lion King! Only simplified, retarded, and with no dramatic weight whatsoever! But at least we can giggle as the dude voicing Simba fails miserably to do a Matthew Broderick impression!

What’s weird is that these moments of utter idiocy are eased by the occasional moment of brilliance. The part where you go “back in time” to a black-and-white Steamboat Willie universe? EPIC. The fact that the Tron world is in this game? WONDROUS. And my jaw dropped at the end when they actually explained the weird-ass plot....AND IT MADE SENSE. The prologue of this game was so fucking random and bizarre that I thought it was a continuation of the plot from Kingdom Hearts: Chain of Memories. Or maybe a fever dream. But no, they EXPLAINED all that random stuff, and I understood it! It was stupid as hell, but I understood it! I’d like to shake the hand of the men and women who managed to make this dopey mishmash of a “plot” add up in a pseudo-satisfying manner!

Speaking as a gay guy.....the ending of this game is the gayest ending of any game, ever. If you have played it, you know what I’m talking about. You’ll also understand the meaning of this sentence: Awkward hug versus falling on your knees and sobbing. Awkward hug. Falling on your knees and sobbing. Congratulations, Sora, you passed the gay test. Though, to be fair, Riku is the prettiest person in the whole game.

I just dissed this game majorly, but that doesn’t mean I didn’t enjoy it! It was fun. I like the KH franchise, largely because all those random, painfully awkward Disney/Squeenix mashups make me giggle. The worlds were all pretty cool. The Winnie the Pooh section was vastly improved and had games that were actually fun and didn’t make me want to shove Pooh through a wood splitter. The Little Mermaid “musical” world was.........ehhhhhh. I did like the Gummi Ship courses even though they were pointless. It was amusing how we got two sets of villains for the price of one. Christopher Lee brought some class to the proceedings. And they had a “Pirates of the Caribbean” world, which was so surreal and hilarious that I could barely take it. I love how the various Disney characters that appear in these games just....take everything in stride.

SORA: Hi, I’m a freakishly proportioned anime child with hair like the Sydney Opera House, only stiffer. I have a huge glowing key. These are my friends, two talking animals who look nothing like animals. We fight bad guys who explode like piñatas, and money comes out!
WILL TURNER: I do not find this odd at all. Come on, let’s rescue my beloved!

Aaaaanyway. Kingdom Hearts II. It’s a lot of fun. I am not sorry I played it. It just begs to be mocked. A great deal.

And that’s what this critic is all about.
Posted by Dang-Blasted at 5:31 PM