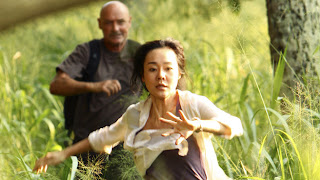 --Everybody was there. Holy shit, EVERYONE GOT LINES. I am so weirded out by this! How long has this show been hopping back and forth between two or more separate groups of people, leaving half the characters totally offscreen for entire episodes? Too long. This feels like....lordy, it feels like Season One! Well, Season One with way more crazy sci-fi shit going on. But even the pyrotechnics were turned way down here. This episode was a much-needed ensemble piece while still giving Sun and Jin so much to do. It feels like the first legit episode of the endgame, and while I’m saddened by the implications, I am also supremely satisfied. Mostly.

--So, yeah, in a sideways timeline, I am screaming in rage that our Kute Koreans could not be reunited even in their last-ever centric episode. But in that timeline, “The Package” was just mediocre. In this timeline, the ep was pretty damn great and a wonderful showcase for Sun and Jin, as they faced menace in Timeline LAX and personal drama and manipulation in Timeline ANKH. The ep surprised me. Yeah, the final twist was easy to predict, but there were a lot of little twists that I honestly did not see coming. I’ll discuss those great little twists and why they’re so cool.....

--Little Twist #1: Sideways Sun and Jin ain’t married! Nope, he’s just her “bodyguard” for this little jaunt to Amurrrrrica, but not too surprisingly, they’re still madly in love and knocking boots in swank hotel rooms. Sun still has her crazy escape plan, but now it involves both of them making a break from Sun’s scumbag father and starting a new life together. Alas, it was not to be. Both timelines underlined how others have tried to control the destinies of this lovestruck couple. Keamy and Omar showed up in full-on goon mode, bringing with them another familiar face, Sideways Mikhail (Little Twist #2!), and the scenes in which they tormented Sun and Jin were kind of scary to watch, even knowing that these goons get mowed down later. Even worse, Sun learned that her evil dad knew about her escape attempt and had hired Keamy to terminate Jin. Wince! It was a chilling reminder of how evil can work on people. Sorry, Jacob...you put the cork on the wine bottle pretty tightly, but I think these bastards escaped.

--Little Twist #3: Mind-jumbled Sun. It was great to see Sun stop playing the passive follower and lash out in frustration, sick of being jerked around. She returned to her long-lost garden (which was in a totally different location than in Seasons One and Two...nice going, continuity people) only to be confronted by UnLocke and his silver-tongued promises. Smartly, she fled, but cracked her head on a branch. (Why’d UnLocke just leave her there? Is he unable to abduct people against their will? Or did he....gulp.....do something to Sun?) This injury left her unable to speak English, though she could still understand it. Plot contrivance? No, irony! At the start of this show, it was Jin who was alienated by the language barrier, assumed to be a jerk and a tool because he could not properly make himself clear. Now it’s Sun who yells in Korean while everyone else stands around looking baffled. Wince! It’s also kind of a metaphor for turning back in on yourself...maybe to find what you really need?

--Little Twist #4: Nice-guy Widmore! He sent his goons to abduct Jin, presumably as part of some sinister scheme. Or maybe because Jin holds crucial info from the Dharma era. Depends on whom you ask....right, Tina Fey? But Widmore was really nice to Jin and handed him Sun’s camera, salvaged from Flight 316. On the camera, photos of Sun and of adorable little Ji Yeon. Awwww. Also....WINCE! Watching Jin break down as he viewed his daughter was painful, and obviously what Widmore intended. Still, the way in which he presented himself...it was convincing. I have predicted that Widmore’s not really a bad guy, or at least that he and our heroes can potentially join forces against the real baddie, Mr. Smoke-Filled Meatsack, who confronted Widmore at the portable sonic barrier and coldly told him that the rumble in the jungle was officially on. Hells, yeah, it’s on! But who will pay the price?

--Little Twists #5 and #6: Darth Sayid and PsychoClaire. The ep spend just enough time on these two henchpeople to make us really worried. First, Sayid blankly admitted that he feels nothing; his emotion has been drained from him. And UnLocke is creepily happy about that. Then Claire revealed that she’s gone back to hating Kate....and UnLocke cheerfully hinted that Claire can carve Kate up like a Christmas roast once all this is over. The way in which he’s pitting the two gals against each other...well, it ain’t gonna end well.

--In the midst of the turmoil, drama, suspicion, and whatnot, were Sun and Jin, two people in search of their better halves. They didn’t find each other this week, but the seeds are in place for them to finally take charge of their own destinies....or to potentially be destroyed. In a horrifying cliffhanger to the flash-sideways story, Jin escaped the goons with help from Darth Sayid, then took out Mikhail (oh, Jin, don’t you know how FUCKING HARD it is to kill this guy? You’re gonna need way more than bullets!)......but Sun got shot in the struggle. And as Jin frantically carried her off, she revealed that she is pregnant. And I’m guessing sideways Jin ain’t infertile, so it’s his. Fuck....I know the sideways stories will all be revisited in the last few episodes, but Jesus. This is the worst sideways cliffhanger yet, and I fear it also serves as foreshadowing for the events on Timeline ANKH. With Jin still the “guest” of a potential evildoer and Sun alienating herself from her friends (though not from Jack, thankfully), what may befall either of them, or both of them? Will their reunion only occur when one lies dying in the other’s arms? I’m gonna bite my nails for awhile.

Huge and Predictable Twist #1: Desmond. As we all guessed, Widmore’s brought him along. He’s back and he’s....rather woozy from all those drugs. Ah, but here’s what we didn’t predict quite so easily: Desmond is somehow vastly important to Widmore’s agenda. Widmore seems to think that Desmond is somehow....a weapon. Or so he implied. And it looks like we’re getting Desmond’s story next week, so I have something else to bite my nails about.