The Descent (by Jeff Long) 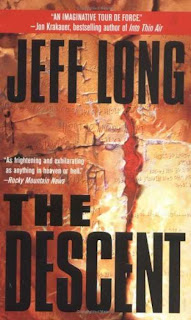 The thriller genre and I have a love-hate relationship. On the one hand, as a writer who likes to think he has some integrity, I’m always pissed off at the poorly-written, sensationalist crap that floods the market. On the other hand, thrillers are fun, dammit. Well, they’re fun if they’re good. I read books to be entertained, same as everyone else. When it comes to thrillers, I approach with caution, because there are so many bad ones. A good thriller for me is competently written, exciting without seeming contrived, contains interesting characters rather than archetypes, and preferably holds an element of the fantastical. Dan Brown writes bad thrillers. Douglas Preston and Lincoln Child write good thrillers. Clive Cussler writes bad thrillers. Michael Chrichton wrote okay thrillers.

Well, I’m happy to say that Jeff Long, based on The Descent, writes good thrillers. Mostly. I love it when the story is framed in an epic lens (remind me to talk about my love of disaster movies someday), and this crazy book is nothing if not epic. Long, an experienced climber and outdoorsman, takes us below the ground rather than above it. Oh, does he. We learn that there is a seemingly limitless network of tunnels, caves, and spaces beneath the planet’s surface, an entire “subplanet” that rivals the sunlit world in scope. If we could chart it and make it our own, it would solve overpopulation, fulfill all our raw resource needs, and redefine politics....not to mention what it would add to archaeology, geology, zoology, etc. Problem is....it’s already occupied. Taken up by creatures called hadals, an aggressive and hostile branch of the genus homo, prone to slaughtering humans, or enslaving them. War breaks out, the hadals are pushed back in the unknown depths, and an eeeeevil corporation sends an expedition deep beneath the Pacific Ocean floor in an attempt to basically grab themselves their own underground nation.

Cool stuff, if completely implausible. Long alternates between the global response to the subplanet and the individual human stories at work. The (ill-fated) expedition includes our heroes: Ali von Schade, a linguist nun, and Ike Crockett, an introverted ex-climber who spent some time as a slave to the hadals. Tension threatens to boil over between the freewheeling scientists and the morally bankrupt mercenaries hired to protect them. Meanwhile, on the surface, a group of aging scholars set out to determine if, since hell exists, there is also an entity who has ruled the underground society, staying alive for eons thanks to shared consciousness....in other words, a Satan. The narrative takes the classic ideas of Jules Verne and H.G. Wells and runs it through a meat grinder, producing a perversely enjoyable mix of cryptozoology, splatterpunk, and survival horror. I dug it. I love crazy, Lovecraftian hijinks and The Descent has them in abundance.

Long writes well, which is both a blessing and a curse. His prose can be dryly poetic at times, which is miles above the assembly-line banality of, say, The Da Vinci Code. His characters are nicely flawed. His imagination runs gleefully amok. The problem is, he sometimes loses focus. Many of the supporting characters don’t get any background or depth, so their contributions to the plot are arbitrary. He suffers from a kind of writer’s hubris, assuming that because he knows what he’s talking about, so do we. As a result, plot strands and character motivations get tangled. The story structure makes weird and abrupt jumps in time. Some of what goes down is woefully predictable; anyone familiar with stories like this can guess who’s going to turn out to be the villain in disguise. One fairly major character vanishes for half the book, only to turn up at the end....just so he/she can set up the inevitable sequel. I ultimately feel like this book could have been a bit longer. He’s created an entire world to play in; why rush through it? Why not linger properly in its weird culture and awesome spaces? He spends too much time hurrying the plot along, not enough time dwelling on the twists and turns it takes.

Still, The Descent is a pretty cool book. It is deeply disturbing and greatly entertaining. Luckily for us, Long does not make the hadals into cartoon monsters, but shows us glimpses of their civilization -- and, crucially, their suffering -- while saving his greatest evil deeds for the good old human race and its need to exploit, dissect, and exterminate what it doesn’t understand. Right from the beginning, he blurs the comforting line between Us and Them, uncorking a few superbly creepy sequences that make it plain how fluid that distinction can be. (How the shared consciousness concept plays out may give you nightmares.) Ahhh, the dark night of the soul. I could dissect the symbology of seeking Satan for answers and reverting to the womb of the earth, but The Descent isn’t quite that profound. Instead, it is cool, freaky, gripping, and most of what a top-notch thriller should be. And since it shares a name with one of the greatest modern horror films ever made, I’d say we’ve got ourselves a winning combo! Caves plus cannibals plus the word “Descent” equals awesome sauce.

Recommended!
Posted by Dang-Blasted at 11:00 AM