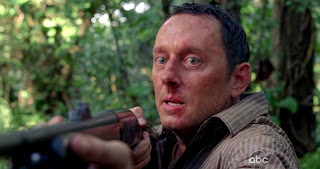 --Damn, you know....I was actually touched. This episode actually moved me, emotionally. I was expecting “God hates Ben Linus” and got “God forgives Ben Linus.” And yeah, I know I keep making God references, but you can substitute the word “God” for “Allah” or “Jacob” or whomever you want. I don’t necessarily believe in God, but I do believe that some mysterious higher power is pulling the strings in the Lost universe. And that power forgives Benjamin Linus, because, despite all his lies and schemes and manipulations and murders, he has the ability to hurt, and to love. He’s not without that, and this episode showed him pull himself from the abyss in both timelines. To paraphrase an expression that has huge relevance on this show, the doctor healeth himself.

--Ahhh, the schemes and politics of high school! I thought it was pretty funny, actually, to see Ben as a persnickety history teacher who gets shafted by authority and gripes about it behind authority’s back. I’ve known teachers like that. Denied respect and funding, Ben was convinced he was destined for nothing better than detention duty and derision, but then a lovely blackmail scheme was dumped in his lap by none other than Alex Rousseau, playing the role of a dogged history brain whose mom works two jobs to pay the rent (Ooohh, can’t wait to see Sideways Danielle!) and who needs Yale like a dying man needs water. Ben was faced with a devilish dilemma: he can blackmail his slimy principal and take his job....but the slimy principal, a Yale alum himself, is the one who makes or breaks Alex’s future. Will Ben throw Alex to the wolves in order to better his own ends....JUST LIKE HE DID ON THE ISLAND? The suspense! Tune in to later in this recap!

--The tortured journey of Timeline ANKH Ben began with an OH SHIT moment, as Miles ghost-whispered his way to the truth about Jacob’s death. Ilana did not take it well. And Ilana is a very, very, very scary woman. Even scarier than Sun in full-on passive-aggressive mode. Enraged, Ilana shackled Ben and forced him to dig his own grave, which in other circumstances would be a perfectly appropriate fate for the little weasel. I love how, at the start, Ben was his usual conniving self. He lied. He made excuses. He tried to bribe Miles, tried to cozy up to Frank, and initially fell for the fat Island-shaped carrot that UnLocke dangled before his beaky nose. We were watching a man who could not change, could not break the shell he’d built, and I for one was expecting a tragic death. I was figuring that either A) Ilana would kill Ben after he tried one final, devastating time to weasel his way out, or B) Ben would kill Ilana and give in to his worst impulses. I was ready. We were ready. As Sideways Ben had to choose between failure and moral oblivion, Normalways Ben had to bare his soul or lose it. THE SUSPENSE!

--Know who else is a doctor? Jack. And the physician is ready to heal, it seems. His office? The Black Rock, that mysterious, boat-shaped chunk of major Lost arcana, an improbably jungle-parked slave ship where we’ve already seen the tragic/hilarious death of Leslie Arzt (awesome in Timeline LAX) and the tragic/necessary death of Anthony Cooper. Richard Alpert was determined to add another body to the list: his own. Much like Michael in Season Four, Alpert cannot cause his own death. But, his faith shattered, he hoped Jack would. Only Jack has gotten a dose of Lighthouse Symbology and understands that he can’t die either. Not now. He called Alpert’s bluff, and sure enough, the dynamite did not go kaboom. Faith restored, Mr. Alpert? We shall see. But Jack’s a man who at least knows that he has a role to play, perhaps as a healer, definitely as a leader. And guess who else knows his role?

--Ben, the Redeemed. In Timeline LAX, he did the right thing and chose Alex over blackmail, accepting that he may not have much in life, but it is precious and should not be damaged. He is compassionate. He cared for his cancer-ridden father when another might have tossed him away, remembering his past wrongs. He could have killed Ilana, but instead, he told her the truth. Finally, finally, Ben Linus told the truth. And it hurt. God, how it hurt. You could see it in his eyes. So could Ilana, who did not forgive, but did find the same compassion in her own soul. Folks, Ben’s for real now. No more secrets, I think. He is healed, healed by Ilana’s mercy, Sun’s smile, and the willingness of those around him to let him be. And I am touched.

--I still had to roll my eyes at the final moments. Honestly, I thought Lost had rid itself of the Syrupy Slow-Motion End Montage. But it returned, complete with piano score and Hurley hugs for all. Oy. But I should have known that the final shocker was coming. You see, in the water off the Island is a submarine. In that submarine is Charles Widmore. And Widmore is someone we should probably be very worried about. So, yeah, touched by Ben and all, but......OH SHIT.

--Final note: I will not waste space writing out my hysterical laughter when Miles gave his shout-out to a certain universally-hated pair of wannabe diamond thieves. I saw it coming, but it was no less wonderful. Neither was Miles snarking “Uh-oh!” at Ben when the shit hit the fan. I. LOVE. MILES. And I actually want him to get away with the diamonds, because how awesome would that be? Seriously.
Posted by Dang-Blasted at 12:11 PM