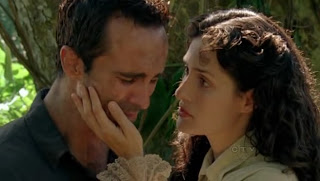 --Once upon a time, there was a man named Ricardo. Ricardo was, shall we say, shat upon by fate. Boy, did fate seem to have it in for poor Ricardo. But then fate threw up a tidal wave strong enough to shatter rock, and Ricardo found himself in hell. But hell was a very strange place, and the devil turned out to be the one Ricardo should trust. Hell, he learned, was like a fragile barrier between good and evil, a dam holding the flood of pure negative energy at bay. Without hell, there would be no world of men. And Ricardo held this knowledge in his heart for a very, very long time. And the world changed. And the devil died. And Ricardo, who now wore a new name and spoke with a new voice, had to decide if he was going to change...or die.

--That pretty much sums up this freakin’ cool episode, in which the past of the Other named Richard Alpert finally came to light. And it was awesome. I knew it would be; this show usually delivers when it comes to the mythology episodes. This ep shed plenty of new light on the history and purpose of the Island, but also delved into the heart and soul of Richard. I guess I can stop calling him Alpert now that we really know the man. Wow, remember when Alpert was this suave, oily dude in a suit trying to convince Juliet to go to the Island? Did anyone look at that dude and think, “Yeah, he’s totally an immortal, lovestruck Spaniard who came to the Island in chains and had his faith shattered and rebuilt”? Probably not. But Lost knows when a character is too good to let go.

--Almost the entire ep was one long flashback, a trick which Lost has pulled before, but never without good reason. We began rather unexpectedly with an Ilana flashback that basically served as exposition (enjoy it, ’cause she ain’t ever gettin’ her own ep), then there was some set-up in which Richard ranted about hell and Hurley mysteriously chatted with an invisible someone in Spanish. And THEN....the plunge into backstory. Ricardo appeared on a horse, all “Guyliner of Zorro,” trying to save his lovely and dying wife, Isabella. Did he? Of course not. And to make matters worse, he accidentally killed the cruel doctor who would not give him the medicine. Condemned to death, spurned even by a kindly priest, our hero could only flail at the godless void into which he had been cast. Then came the Brits, looking for slave labor, and Ricardo wound up in the hold of the Black Rock, heading toward a head-on collision with destiny....literally. WHAM! Taweret rose from the waves like a force of nature, but shattered before the storm’s fury. Some will complain that a wooden ship could not break a stone statue. That may be true, but I see it as a metaphor, the sign of a major paradigm shift on the Island. More on that later.

--The episode’s one flaw was that Ricardo spent a leeeeetle too much time in that damn hold. After the crash, Whitfield (whom I thought was gonna turn out to be Widmore’s ancestor until he bought it) tried to exterminate the surviving slaves, until a certain chittering, rattling black cloud showed up and did the brunt of the exterminating. But the Nemesis scanned the terrified Ricardo and saw a malleable soul ripe for the using. It toyed with him. It let him fester in the hold. It appeared to him as Isabella, telling him he was in hell, then (seemingly) dying again while he looked on in despair. And then, of course, the smiling, smooth-talking Man in Black. I love how actor Titus Welliver is subtly echoing the performance of Terry O’Quinn as Locke. I just feel like the hold sequence lagged a bit, especially since we knew Ricardo doesn’t die. Did we really need the thing with the nail and the wild boar? Just saying.

--(Note: Lost geeks know that the unseen Magnus Hanso is the ancestor of Alvar Hanso, the zillionaire who funded the Dharma Initiative. Which has no relevance to this ep, really, but still.)

--Anyway, the Nemesis told Alpert that he had to kill the devil, and pushed a knife into his hand. “If he speaks, it’s already too late.” Ahhhh, the grand irony! What could Ricardo do? He set out to the beach and found the Statue in ruins, broken by the winds of change. Then he got his ass handed to him by a very un-benevolent Jacob, who was PISSED at this attempt on his life. Hee, I couldn’t help but love Asshole Jacob! I wanna see more of him! However, once Ricardo had basically apologized for being a mope and a tool, Jacob softened and offered the marooned man that nifty cork-and-bottle anthology. I get the sense that we’re not going to get much more of an explanation for the Island’s ultimate purpose, but Jacob made it convincing. And the Statue’s destruction was cool no matter what. See, Ricardo was the first success, the first one whom Jacob was able to truly mold and use. That success led to future successes, and the Others were born...which changed the Island dynamic completely. So you see, the sundering of Taweret represents that shift, that turning point. Break the old ways, bring in a new story. Kinda like, oh, a certain airplane crashing?

--There we have it...the saga of Ricardo, who became Richard Alpert, who kept going because he believed that Jacob had the answers. In the present day, faith ruined again, he prepared to return to the lies of the Nemesis, but dear Isabella had other plans. Using Hurley as her mouthpiece (have I ever mentioned how utterly wonderful and amazing Hurley is?) she rekindled his faith with a love that he could not see or hear, but could most assuredly feel. Was she real? Do the ghosts of loved ones truly follow us, or was the Island itself creating images with its mystic energy? Whatever the case, Richard remains on the side of good. And UnLocke, watching from afar, ain’t happy. Let’s all point and laugh!

--Phew...cool episode! I think this is the first truly “period” ep Lost has ever done, and I like it. I hear there may be one more of these before the show ends. Cool. In the meantime, we can look at Richard with new eyes and shiver at the final image of the Nemesis symbolically smashing Jacob’s bottle of wine. We can also wish to the Island gods that it was next week already. Because next week features something just as hotly anticipated as the Richard episode: THE SUN/JIN EPISODE. OH GOD OH GOD OH GOD OH GOD OH GOD.....
Posted by Dang-Blasted at 3:51 PM