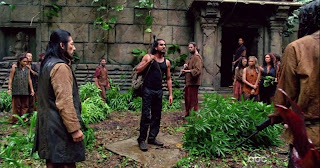 --I was all set to boycott this episode if they killed off Sun. Seriously. All the hints were there: the ep’s title, the way in which all the characters explosively came together, Darth Sayid and his Knife of Deadly Doom....I was waiting for it, and seriously considering just not doing a recap in protest. But nope, Sun’s okay! Can’t say the same for a bunch of Others, but, eh.

--God, Sayid! I wanna cry for the man. Every Sayid-centric episode for the past, like, four seasons has sent him farther and farther down the path to oblivion. Losing Nadia, working as an assassin, gunning down Young Ben....I thought that last one was as low as Sayid could go, but nope. There is a lower circle of hell, and it comes in the form of a malfunctioning pool and a charismatic Nemesis full of big promises. If God hates John Locke, as I previously suggested, then God must be bloody TERRIFIED of Sayid Jarrah. Somehow, I don’t think he’ll be doing his five daily prayers to Mecca any more.

--Dogen, we barely knew thee. Did I see his death coming? Yeah, I did. The damn baseball sealed the deal. Dogen was all said to end Sayid with his bare hands, and came really close in an AWESOME fight scene that rattled the whole Temple. (Guess if you hire a Japanese superstar, you’re damn well gonna get some martial arts out of him!) But Dogen saw that baseball, and couldn’t bring himself to do the deed. Instead, he got really sneaky. When Claire popped up to demand parley, Dogen sent Sayid to kill UnLocke, knowing that mere knives to not work on a meat puppet filled with evil black smoke. But UnLocke did not kill Sayid. Nope, he looked into the tortured, damaged, fucked-up heart of the man and saw the perfect weapon, even better than Sawyer. Sayid was willing, almost desperate, to be used. And after one last ultimatum to the Others (many of whom took the bait), the Nemesis unleashed his full CG wrath on the Temple and all within. Take THAT, whiny fans who compare the Temple to the Hydra Station!

--Wow....the Fearsome Foursome sure showed up abruptly, didn’t they? I mean, last we saw, they were on the damn beach. I was so sure Miles was gonna die; hell, he split up with Kate! Silly Miles, don’t you know that she’s the only damn character who they won’t kill? I was expected a slasher movie death for the ghost whisperer; instead, we got SunBenIlanaFrank barging in so they could....immediately leave again. Wait, what? That doesn’t make sense! Why couldn’t Miles have escaped the Temple and run into them in the jungle? I don’t get it.

--What I do get -- and LOVE -- was Kate’s sunny, utterly misguided visit with Claire. Oh, how I laughed. I laughed and giggled and pointed my finger at Kate and her toothy, clueless grin as she explained her baby-thievery to a very, very, very unamused Claire. Jesus, how could she not notice the invisible cobras and acid-dipped chainsaws flying from Claire’s eyes? That was about the scariest expression I’ve seen on a human face since UnLocke’s “I wanna go home” demon mask from season premiere. But Claire doesn’t seem content to kill Kate just yet. No, she’s gonna toy with her, like a cat toys with a particularly DERP DE DERP mouse. I am so totally on Claire’s side.

--And then Sayid. Back to Sayid. The flash-sideways gave us a quiet, thoughtful Sayid who pushed his love, Nadia, away from him and into the arms of his brother because he could not get over his monstrous past. And when big bro borrowed money from the wrong people, Sayid went back into the darkness to defend his family....or, more aptly, was pulled back by the bad guys, who turned out to be our favorite Freighter thugs, Keamy and Omar! AWESOME. And even more awesome that Sayid just KILLED them, with almost pitiful ease. Sorry, wannabe evildoers, but you’re dealing with Darth Sayid now. Darth Sayid will fuck you sideways, pun intended. And in the token Holy Shit moment, Sayid discovered Jin, bound and highly unhappy, in Keamy and co’s meat locker. I assume we’ll learn how Jin got from being in trouble at LAX to being in trouble here, but in the meantime....more language barrier jokes. Wheee.

--So Darth Sayid went back to the Temple and proceeded to ruin everyone’s day. All jokes aside, Dogen’s final scene was pretty tragic, mainly because we all knew what was coming. He told the tale of the baseball, how he got his son killed because of his own foolishness (foreshadowed in the last ep’s flash-sideways!) and then saved said son -- and gave him up -- for Jacob and the Island. His story told, Dogen died, drowned by Sayid’s own hand. I’m wondering: would a guy with martial arts skills, who easily bested Sayid earlier, go down that quickly? Did Dogen, on some level, give in to despair? Maybe. But his story is done, and I fear Sayid’s final plunge is just beginning. Now the Temple is purged, and UnLocke has himself a new army of Other recruits, not to mention Darth Sayid, PsychoClaire, a very confused Kate, and apparently Jin, though we didn’t see him. Yep, he’s building an army. So far, he’s winning this war. The good guys had better start scrambling.

--Final note: “Catch a Falling Star” has joined the list of Songs That Are Supposed to Be Lullabies But Are Actually Horrifying.

Final final final note (I promise): Is Sawyer still stuck in that cave? I mean, the ladder to the cave broke, didn’t it? I picture UnLocke turning to smoke and flying off while Sawyer whines, “Son of a BITCH!” and starts desperately looking for some of Jacob’s old Sudokus.
Posted by Dang-Blasted at 11:44 AM