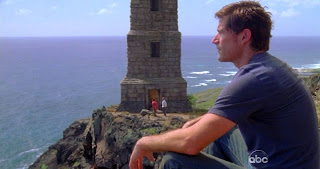 --Now THAT’S more like it! I’m apparently the only person on the planet who wasn’t totally crazy over last week’s let’s-all-feel-sorry-for-Locke ep. And while I normally don’t care much about let’s-all-feel-sorry-for-Jack storylines, this one felt pretty satisfying in its development and execution. Parts of it were funny (thanks, Hurley!), parts were fucking terrifying (HOLY SHIT, CLAIRE), and it felt like a successful single-short story while still being plugged into the main mythology. Boo yah! Let’s continue.

--So, yeah, Jack. Frustrated and confused in the wake of his father’s body’s disappearance, Timeline LAX Jack suddenly had to play daddy himself, and not figuratively. Yes, this version of Jack had a son, David, who is now a borderline-autistic little mini-vampire who makes Heath Ledger in Brokeback Mountain look like Heath Ledger in The Dark Knight. Jack wanted to bond with his vampire son. Jack tried to bond with his vampire son. And Jack finally did bond with his vampire son, after that old clichéd scene, the Parent Who Walks In On His Kid’s Recital At the Last Second. Awwww, little vampire David is a prodigy! And here’s Sideways Dogen to offer a little fortune-cookie tidbit about letting your kid go! Okay, so, maybe there was nary a speck of originality in Jack’s flash-sideways, but at least it ended on a happy note and neatly paralleled the Timeline ANKH jungle boogie. And things even stayed slightly spooky, thanks to Jack’s uncertainty about his appendix and Claire’s name popping up in Christian’s will!

--Speaking of Claire.....HOLY SHIT ON A BARBECUE. I was praying for a creepy, ruthless, survivalist Claire and the show delivered and then some! Poor Jin found himself a semi-willing guest of the formerly guileless little Aussie as she waffled between charm, bloodymindedness, and complete, screaming, raving psychosis. Claire thinks the Others have Aaron, and she’s willing to do just about anything to get him back, including take an axe to poor Justin, who survived being shot only to suffer an even worse fate. Lord, at the rate our “heroes” mow through Others, how can there be any left at all? Jin tried to tell the truth, then immediately realized that he’d rather not be HORRIBLY MURDERED TO DEATH and confirmed that the Others had Aaron. Which means the Temple is fucked, or did you not notice those conspicuous boxes of Black Rock TNT? Aaaaaand Sun should be arriving at the Temple any minute now! Nice one, JIN.

--Creepy Ghost Jacob obviously has plenty of time on his hands, because the dude’s just on poor Hurley all the time! I’m wondering if Hurley’s gonna snap and stop being Jacob’s errand boy. Let Miles do it! Make him swallow some of Jacob’s ashes and he’ll hear the guy’s soft, soothing voice all the time! But, nope, it was Hurley who got tasked with the job of hauling Jack through the jungle to yet another date with destiny or something. On the way, they awesomely stopped at the Caves (whoa! Haven’t seen those since, when, early Season Two? Remember when building an aqueduct was the castaways’ most pressing concern? Innocent times, innocent times) and ogled the legendary Adam & Eve skeletons. Hurley nervously pointed out that the corpses could be time-unstuck Lostaways. Way to address the major fan theory, show, but is it true or not?

--Have I mentioned how much I love PsychoClaire? Watching her dunk painful-looking metal implements in boiling water was just great. So was her messed-up, demonic effigy baby. She is terrifying and adorable, and I REALLY hope Kate waltzes into the Claire Lair and happily says, “Good news, Claire! I’ve been raising your kid as my own these past three years! No need to thank m....uh, wait, what are you doing with that....OH SHI--” Wouldn’t that be awesome? Well, I think so.

--Right, right Hurley and Jack. They arrived at the Lighthouse, and Jack actually commented on odd it is that no one’s seen it before, which was hilarious and intriguing. ’Twas an old-school affair, nothing but big mirrors that could be rotated around a giant pedestal. And on the pedestal....what else? Lots of names, most crossed out, each relating to one degree. (I spotted “Rousseau,” but no other familiar ones.) Hurley was set to turn the mirror to 108 degrees so Jacob’s mysterious “someone” could find the Island, but when it got to 23 degrees (“Shepherd”), Jack saw his childhood home in the mirror and realized the Jacob had been magically spying on him all this time. Enraged, he smashed the mirrors. But it was all part of Jacob’s plan to make Jack realize how important he is. Is it just me or does Jacob seem very slightly sinister right now? What’s his ultimate agenda, and is there really someone he’s trying to draw to the Island? Desmond maybe, or Widmore, or both?

--Spooky as Jacob is, he’s still not as spooky as UnLocke, Claire’s new best friend, who popped his head into the Claire Lair to beam malevolently while Jin made his usual “OH SHIT” face. Yup, doesn’t bode well for the Temple. Oooohhh, I can’t wait to see lots of explosions and stuff! Jack will make so many funny faces when he learns everyone’s dead! Squeeee! I’m full of puppies and rainbows, just like Claire!

--Hurley-related things that made me laugh merrily: Him writing Jacob’s instructions on his arm. His pained look after scaling the Lighthouse. Ghetto tic-tac-toe with Miles. And the lines, “I just lied to a Samurai,” and, “Jack just broke your lighthouse, dude!” For these things alone, I give the episode high marks. Long may Hurley reign.
Posted by Dang-Blasted at 11:04 AM