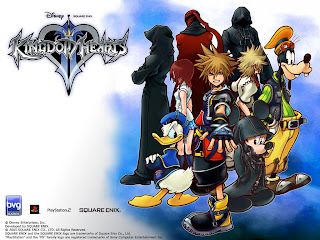 I don’t just review new things. In fact, most of my reviews will be of things that have existed for awhile. This is not chronological order; this is ME order. The order in which I encounter things for reviewing.

I enjoyed KH1 quite a bit, though not without some reservations. As a casual Final Fantasy fan, I simply could not approve of the mutated, kiddie versions of famous FF characters who showed up anachronistically throughout the game. I had more fun when it was all Disney, all the time, because who WOULDN’T want to summon freakin’ Simba to kick some ass, or run around Halloween Town? Sadly, the combat was a sparkly, button-spamming clusterfuck and my loyal sidekicks existed mainly to use up all the potions. Still, good times.

The plot is even more vague than most Final Fantasy stories, which is saying a lot. I can’t even begin to describe it, so I’ll just say that the hero is a kid named Sora, his sidekicks are Donald Duck and Goofy....uh....McGoofy, there are lots of worlds, and Sora wields the Keyblade, a big sword/key thing that....does stuff. Yeah. Enough exposition.

Right away, Kingdom Heart II wins the award for the most bizarre, random prologue sequence in the history of gaming. Seriously, I’m not sure it really happened, or if I hallucinated it. You spend over an hour as some kid named Roxas, running around a charming place called Twilight Town that seems to only have like a dozen residents, doing utterly meaningless chores with three other kids. I....honestly have no clue what was going on. Twilight Town is a computer simultation....maybe? And Roxas isn’t real.....I think? And there’s this Tusken Raider dude with the voice of Christopher Lee, and this cryptic blonde girl, and these evil guys in hoodies named Organization XIII, and Ansem (the bad guy from KH1) is a member of OXIII but is also in league with Christopher Lee the Tusken Raider, only he’s also maybe working against him, and you have to fight some gay albino sex slaves with fanny-packs for heads, and Roxas was a member of OXIII but now he has different memories, and he’s Sora’s evil twin.....or....maybe......but......gggaaahhhhhh. This utterly baffling bafflement goes on for awhile, and then Roxas vanishes, Sora reappears, the actual GAME begins, and the prologue becomes some sort of surreal fever dream. What the FUCK.

I believe I know what happened. See, between KH1 and KH2, there was a DS-exclusive game called Kingdom Hearts: Chain of Memories. Okay, no problem, except that Disney and Squeenix violated one of the cardinal rules of video game franchises: SIDE-GAMES CANNOT CONTINUE THE MAIN STORYLINE. Is it necessary to play the eight thousand Resident Evil side-titles to understand the overall zombie-ridden mythology? Um, no! Will God of War 3 hinge on the player having already played that Chains of Olympus thing on the PSP? Of course not! The whole point of side-games is that they MERELY EXPAND the world of the franchise. And yet, all this crazy shit apparently happened in Chain of Memories, and they felt the need to continue that storyline into KH2. And so this poor critic who does not own a DS and did not get to experience Chain of Memories is COMPLETELY IN THE DARK BECAUSE A HUGE CHUNK OF NARRATIVE IS MISSING. THANKS, MORONS.

Anyway, I am now past that cryptic pile of prologue and into the main plot, which follows along faithfully from before. Sora is still trying to find his jailbait friends. Donald and Goofy are still annoying. The gameplay isn’t that altered and the battles still consist of frantically mashing X until everything that looks evil is dead. Oh, but now we have Quick Time Events! Yep, press Triangle at the right moments and you can fuck up the bad guys in more creative ways, God of War-style. To be fair, this does make the combat more dynamic and strategy-based....a bit. But baby steps, baby steps.

The Gummi Ship feature has also been retooled somewhat. I haven’t done too much with it yet; I always found the Gummi thing to be kind of pointless in the first game, especially once you get the ability to just warp everywhere instantly. Also, the ship-building part was horribly designed and confusing. It looks quite different in KH2, so I pray that they streamlined it. The flying sections are way more interesting; think StarFox on crystal meth. The only world I’ve visited apart from the hubworld (the randomly-named Hollow Bastion) is the Beast’s Castle, which was quite fun and had a pretty killer boss fight at the end. So I’m eager for more.

KH2, from my first impressions, is plenty fun and fixes enough things from KH1 to make it a step up. Still too much button-mashing and potion-hogging, and WAY too many cutscenes. But they have added one thing that I am eternally grateful for: YOU CAN SKIP CUTSCENES NOW. Thank you, KH team, thank you! You have no idea how much I grew to loathe the cutscenes in the first game....especially the ones right before hard boss fights. Skippable cutscenes should be mandatory in all video games. Anyway, KH2 is good. I can’t wait for the Tron and Steamboat Willie sequences!

But, Jesus, what was UP with that bizarre intro? Are we even gonna SEE those characters again, or was it doing double duty as a wrap-up of the Chain of Memories storyline, and will never be mentioned now that it’s done? Maybe it really was just a dream. I mean....Christopher Lee? Come on!
Posted by Dang-Blasted at 11:40 AM