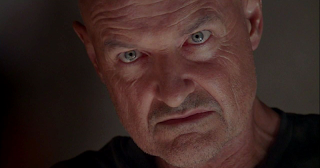 Lost is my favorite TV show ever, and I'm going to be writing up reviews of each episode as it comes. My reviews tend to be as much speculation and fanboy orgasms as actual criticism, so get used to that. Here, somewhat belatedly, is the first!

IMPORTANT NOTE: This review will make absolutely NO sense if you don't watch Lost. Just warning you.

--Okay, okay, it was awesome. Sorry. After two hours of utter fangasming over the intensity of the new season, it’s hard to put one’s thoughts together. Lordy, lordy, how shall I keep my bullet points short and to the point? So much just went down that it took two entire timelines to keep track of it all! We learned a lot, and, as always, were left with questions out the wazoo. There was heartbreak. There were shocks. There was confusion and chaos, the lines between living and dead got even more tenuous, past and present characters came together, and there was even room for that Frogurt douchebag. And wow, was it fun. Season Six is gonna be the real deal, folks, the season of answers. I have so much faith.

--As always, the season began with confusion disguised as banality. How fondly I recall the weirdness of Desmond in the hatch, or Juliet in her cozy Barracks home. This time, we got Jack on a plane, being served vodka by good old Cindy the Stewardess, chatting with Rose as Oceanic Flight 815 buckled and shook. And then....the turbulence died. Desmond sat down beside Jack. Bernard made it back from the loo. The camera swooped into the ocean’s depths to show us a very submerged and seaweed-festooned four-toed statue foot. BWWWUUUHHHH?! DID THE BOMB-EXPLODEY SCHEME ACTUALLY WORK? And if it did, why’s Kate up in a tree with an earache? WHAT IS THIIIISSSSS?!

--Two timelines. I don’t believe it. Two fucking timelines at once. They are pulling the ultimate “What If?” by showing us a dual set of scenarios...the one where our heroes are still on the Island, catapulted back into the present day, and the one where the plane never crashed and everyone was delivered safely to LAX, there to start brand new stories. And they ain’t the stories we expected. In “Timeline LAX” (as I shall call it), a bunch of new potential conflicts were set up. Jin got caught with undeclared money and was hauled off. Kate escaped from Marshall Mars and hijacked a cab....with a very unhappy Claire in the backseat. Jack saved Charlie from suicide, much to the hobbit’s chagrin, then found that the coffin containing his dad’s body had mysteriously vanished. He also bonded with Locke, still wheelchair-bound, but now apparently returning in triumph after completing his walkabout. This has to be significant: in Timeline LAX, our heroes’ lives had already changed prior to Flight 815. Hence, Desmond’s on the plane, Hurley’s all smiles and good luck, and Boone never retrieved Shannon from Australia. Again, BWWWUUUHHH?! What importance might this have?

--Meanwhile, in “Timeline ANKH” (named after the giant symbolic wooden thang found in Jacob’s guitar case), our strange family of castaways struggled to save two of their own: Juliet, now pinned beneath the imploded Swan Station debris, and Sayid, still quietly bleeding out. Sadly, we knew Juliet’s death was a given, but at least she had one more moment with Sawyer. Touching and tragic it was, and a more fitting end to a wonderful character. And it left Sawyer with one helluva vendetta against Mr. This-Bomb-Plan-Will-Totally-Work. When Sawyer snarled, “He deserves to suffer on this rock like the rest of us,” I shuddered. This may be the thing that decides the respective fates of the two men -- not to mention Kate, who’d better make a damn decision soon.

--Ahhhh, the Temple. Cool place. Very mystic and shit, and home to perhaps the most feral, indigenous band of Others yet. Following a tip from Creepy Ghost Jacob (as opposed to Normal Creepy Jacob), the seven dwarves hauled their dying, sexy Snow White into the grasp of this new bunch, who included a very native-looking Cindy. (Yay, Cindy’s back! I’m so thrilled to see they didn’t forget her!). The leader of the Temple Others, Mr. Miyagi, and his sidekick/translator, Hippie Bob, obeyed the written orders from Jacob and invoked a very odd ritual that involved drowning Sayid. Uh, is that what Alpert did to Young Ben? Whatever the case, it seemed to fail, but since we got so many shots of Sayid’s “dead” body, I knew he’d pop back to life. And so he did, providing the “DUN DUN DUNNNNN!” moment before the final title card. Sorry, but I saw it coming. There’s such a thing as too much foreshadowing, show. But how is Sayid changed or unchanged, now that Craphole Island juujuu has saved him?

--UnLocke: one scary mother. As poor Ben looked on in shock and confusion, the man he thought was John Locke revealed his true colors in a really CGI-heavy way, and answered a whoooole lotta questions. When poor Bram and some redshirts burst into Jacob’s lair and shot UnLocke in the chest, guess what he turned into? Awww, yeah. The Man in Black and Smokey are the same entity. He’s been here the whole time, waiting, hungry for his chance to escape. Season One, Episode Four: he faces down Locke and sees a man whom he can twist and manipulate, who may one day be his vessel. Season Three, Episode Five: he seeks an alternative in Mr. Eko, then kills him in anger when the script doesn’t go his way. IT ALL MAKES SENSE. Kind of. Also, significant to note how Bram briefly kept Smokey/UnLocke at bay with a circle of ash. The Temple Others did the same thing. And remember that ash around Jacob’s cabin? The rules are coming into view. Yes, there are rules. But MIB/UnLocke has found ways to get around them. Which cannot be good.

--So, we’ve left behind the 1970s for two different years, 2004 and 2007. I imagine that, for awhile at least, the show will follow Timeline LAX and Timeline ANKH as they go their very separate ways. But is this just a big exercise in theoretics, or is there some significance to the fact that both timelines are being shown to us? Where’s this going? Anywhere, or nowhere? I really hope it doesn’t just turn out to be a big time-padding gimmick. Nah, they wouldn’t do that. Would they?

--The Temple prepares for war. UnLocke marches coldly off into the jungle with his new captive, Richard Alpert. (His exchange with the shocked Alpert strongly suggests that our immortal guyliner enthusiast was once an unwilling passenger on a certain slave ship. Wait, shouldn’t he be black, then?) We say our goodbyes to Juliet, and bid a surprised hello to some old friends. We wonder about Rose and Bernard, about Mr. Walking Jesus Metaphor (that’d be Sayid), about the wrathful Sawyer and the increasingly mystical Hurley. We ponder Juliet’s final claim that the bomb plan worked, and what that could mean. We bite our nails waiting for next week, when we dive deeper into this dense world for the last time. Nothing but good can come of this. Season Six, my friends, will rock.

--One more chilling observation: Creepy Ghost Christian appears to be in league with MIB. It adds up: the discovery that Jacob’s cabin had been compromised, the role of Christian in pushing Locke in the direction MIB needed, and the angry eyeball glaring at Hurley from the cabin in “The Beginning of the End,” which was very likely MIB’s. CHRISTIAN’S A BAD GUY. And, guess who else that implicates? Who else was chilling in Jacob’s compromised cabin? CLAIRE. OH....FUCK.
Posted by Dang-Blasted at 6:52 PM