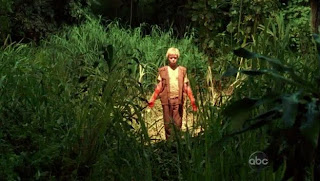 --I’m getting more and more into this whole alternate timeline thing, and you know why? Same reason alternate timeline stories are so popular in comics: because it gives the writers the chance to gleefully fuck around with their beloved characters! I can just picture the Lost writers giggling maniacally as they sit around a boardroom table somewhere, high on Red Bull and SweeTarts, turning Hurley into a charismatic mogul and Rose into a smooth PR gal and Ethan into Doctor McHappySmiley and so forth. Seriously, I’m looking forward to the Timeline LAX shenanigans almost more than the actual relevant stuff! Good thing, ’cause this week’s sideways tale wasn’t quite as relevant as some.

--I guess my problem is that Locke is freakin’ DEAD. He’s DEAD, people. They just BURIED him. Kinda hard to come back from shit like that. As a result, it’s hard to take Sideways Locke too seriously. I mean, yeah, it was poignant and ironic that Sideways Locke accepts his wheelchair-bound lot in life and chooses his beloved Helen over being an overcompensating badass, but still. Dude’s dead. And any what-ifs involving him seem meaningless as a result. Bah.

--Yes, I much preferred UnLocke, because he’s turning into one cool villain. This ep saw the Nemesis (as I suppose I should call him) beginning a chilling campaign of manipulation -- “recruiting,” as Ilana grimly put it -- and when a hilariously bug-eyed Alpert failed to take the bait, UnLocke turned his gaze on the one local dude who’s currently very easy to mold like putty, Sawyer. I think the whole UnLocke/Sawyer business was meant to parallel the Locke/Sawyer jaunt from Season Three, when Locke coerced Sawyer into murdering his (Locke’s) evil dad. That was about when I started predicting Sawyer’s imminent death, and as you can see, I am terrible at predicting deaths. But UnLocke can read Sawyer’s anger and confusion, his ambivalence toward life, and so he set about making the con man into a pawn. And oh, how easy it was. Poor Sawyer.

--No Temple hijinks this week; the only other place we visited was the beach, now bereft of Other extras (phew, say the producers, that’s a couple dozen fewer weekly paychecks!), where the Fearsome Foursome of Sun, Frank, Ilana, and Ben gave the real Locke a funeral at the long-forgotten Boone Hill. Nice shout-out to old Lost lore, right up to the shot of Mr. Eko’s never-to-be-finished (???) church in the background! And only Ben could take a moment of great poignancy and pathos, and turn it one-eighty degrees into ghoulish comedy. “...and I’m sorry I murdered him.” That line, everyone’s nonplussed reactions, Ben slouching away, and Frank’s muttered aside about this being the weirdest funeral ever, had me in highly inappropriate stitches. Also, thank god they buried Locke, already. I mean, I miss him and everything, but the dude’s been lying there in a state of decay for like weeks.

-Sun, NOOOOO! Don’t go to the Temple! Jin’s not there! God, I feel like I’m screaming at the characters in a horror movie. STOP TEASING US, SHOW.

--Hmmmm, spooky adolescent boy in the jungle. And he’s not just a single man’s vision; Sawyer saw him as well. What does this portend? The single, cryptic crack in UnLocke’s calm armor was quite intriguing. Does some lingering trace of Jacob yet remain? Did we just see a future version of Aaron, or has Craphole Island magic turned Walt white? What did Creepy Ghost Teen mean when he said, “You can’t kill him”? Who? Sawyer? Alpert? Jack? Widmore? Hmmmmmm.

--So, to loop back into the land of Timeline LAX....UnLocke’s near-implacable machinations were balanced with the angst of Sideways Locke, who STILL didn’t get his damn walkabout. This time, however, he let go and made a kind of peace with his own crippled body. With the warm, nurturing presence of Helen, he let go of his baggage. I’m still too busy chuckling at the awesome alternate versions of Hurley and Rose to really care. Oh, and Ben. Sideways Ben awesomely popped up as THAT high school teacher. You know, the one who’s really sarcastic and a pariah, who spends a lot of time talking loudly and snarkily to himself while the other teachers silently pray for him to get steamrolled in the next round of budget cuts? Heeee, loving it. Since Timeline ANKH Ben is currently a barely-there mope, I’m glad we have Timeline LAX Ben to be a delightful asshole.

--And then, of course, that harrowing descent into a seaside cave where Jacob once worked his magic. (Was it me or did Sawyer’s perilous ladder hijinks seem like episode padding?) After a humorous/ominous callback to the show’s old black-vs.-white theme, we got the big set piece: a cavern covered with names, many crossed off, many familiar, all bearing numbers next to them. Variables. Substitutes. Jacob seemed to sense his doom, literally or figuratively, and has been working like mad to find....a replacement. And his net was cast far indeed. I imagine that people will be using the power of TiVO to spot some interesting names on those walls (I spotted the name “Troup,” presumably a reference to the mystery author who got puréed by a jet engine in the series pilot). For now, though, it’s enough to know. And UnLocke has knocked another candidate from the wall, thanks to Sawyer’s weakness. One down. A bunch to go. Uh-oh, good guys!

--The moral of this episode: God hates John Locke. Can’t wait until more stuff happens next week! Hopefully involving CLAIRE, who I am MUCH MORE INTERESTED IN RIGHT NOW.
Posted by Dang-Blasted at 10:07 AM