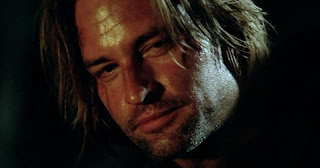 --I am angry with you, show. I forgive you for giving us another episode that was just...passable. I forgive you for bouncing back and forth between two disparate groups of characters to the point where it’s like there’s a whole nother timeline going on. (Timeline EMO?) But I do NOT forgive you for constructing Sawyer’s very last episode with a big, fat, Juliet-shaped void in the middle of it. WHERE THE HELL WAS MY FAVORITE LOST LADY, SHOW? Okay, so maybe you were trying to avoid the expected route, but still. Fail. Charlotte is NO substitute. I want Juliet NOW, and I swear to Taweret, if you make her Jack’s ex-wife in Timeline LAX, I shall kill you. Okay, rant over.

--Sigh, yeah. Fitting that this ep should revisit the Hydra Station, arguably the least popular Lost locale ever. Okay, so the ep wasn’t bad, but it felt kind dumb. So, Sawyer is still a con man who can use his con man powers for good. We learned that much more effectively last season with “LaFleur,” a genuinely awesome Sawyersode. This one was rather redundant, to me at least. The “Recon” of the title refers to reconnaissance, something that UnLocke asked Sawyer to do for him. (Second meaning: “Re-con.”) At the smoke-filled meatsack’s command, Sawyer returned to Hydra Island to feed the polar bears. Uh, I mean, to investigate some mysterious people. After a nostalgic stroll past the bear cages (uh, yeah, sure, I totally bought it that the sexy blouse he once peeled off Kate’s supple torso during their caged lustfuck was STILL THERE. Riiiiiiight.), Sawyer learned that the remaining Ajira folks had been butchered. One more group of redshirts, checked off the list.

--Speaking of which, UnLocke spent the episode playing daddy to redshirts while Kate spent the episode being miserable, with good reason. You know what sucks? When you do a huge favor for a friend, and then said friend suddenly snaps and tries to cut your throat, and a second friend just sits there and passively watches, and then a third friend who died but is still walking around acts all avuncular with you and is really creepy and face-slappy. Kate was confused and wretched, and UnLocke pounced on her weakness with glee and played the poor gal like a flute. I found UnLocke to be the most intriguing thing this week; was it just me, or was he playing Kate and Claire against each other? His treatment of Claire seems geared to make her resent Kate more, and his speech about unbalanced mothers (did we just get actual Nemesis backstory?!) freaked Kate out, as evidenced by her thinly-veiled terror when Claire did a one-eighty into sobby, huggable territory. What if Kate is fooled into thinking that she made a mistake? What if she tries to reclaim Aaron as her own? Probably won’t happen, but still. A dark and intriguing concept.

--So, Sawyer found some Ajira corpses and then ran into, of all people, Tina Fey, who claimed to be a survivor named Zoe but was lying because she was, of course, Tina Fey. Sawyer noted this and deduced that Tina Fey was lying about other stuff. Truth! Yet another brand-new batch of gunmen arrived and marched Sawyer to Widmore’s new encampment, complete with portable sonic barrier, nice! Sawyer spilled the beans to Widmore on UnLocke and offered him UnLocke’s balls on a platter in return for safe passage. Then, con man that he is, he ran back to UnLocke and spilled the beans on Widmore. See, it’s all a plan to sit back while the baddies fight, then nab the sub and make for a non-psychotic part of the world. Nice, Sawyer, nice. Except that I don’t buy it; more on that in a minute. I really am pleased that Tina Fey was able to take some time out from her busy schedule and appear on Lost. Gosh, I hope she gets some good zingers!

--Now onto the pointless flash-sideways. So, in Timeline LAX, Sawyer is a cop, which is admittedly pretty cool; the ep even began with a sneaky scene that rehashed the old briefcase-full-of-money con, but with a far different ending. Only Detective Ford is still keeping secrets, lying to his partner, MILES, then blowing it with his blind date, CHARLOTTE, when she opened the wrong drawer. (Also appearing in this flash-sideways: LIAM! Wait, who’s he again?) Though he found a different outlet for his anger and obsession, he is still driven by that simmering fury that keeps him from pure happiness. Ironic and symbolic, yes, but does it matter? Is this important? When Sawyer confessed the truth to Miles, I just shrugged. I was more concerned with whether or not Sideways Miles can also sense dead people. And when Kate came barging back into Sawyer’s life.....well, thanks, show, for refusing to let something end. I felt like the Kate/Sawyer link was nicely and RIGHTFULLY severed, but now they’re getting cozy again in both timelines. Gee, Sawyer, good thing you forgot all about that other chick, what’s-her-face. Who didn’t even get to appear in Timeline LAX. Dammit, dammit, dammit! I want a Juliet fix NOW or I will go just as crazy as Claire. AAARGH.

--Okay, so, maybe they’re setting Sawyer up for something. (I’m sticking with my theory that he will ultimately be Jacob’s replacement.) See, I have a suspicion that UnLocke knows Sawyer will stab him in the back, and is gonna turn it to his advantage. He knows the kind of man Sawyer is; would he really send Sawyer to Widmore and expect anything else? He’s up to something (I bet he killed the Ajira folks) and Sawyer may have actually been outconned. We’ll find out. Hopefully. If not, then this episode really was kinda filler-y. Sorry, but I was not too impressed. And that, unlike half the dialogue in this ep, is no lie.

--I’m hoping Desmond is behind that locked door in the sub. Who’s with me?
Posted by Dang-Blasted at 3:10 PM