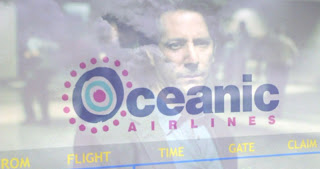 --Love. Isn’t it nice? Love can make or break a man. Love can also make or break a space-time continuum. We already knew that Desmond and Penny’s love crossed time, but now it’s definitely crossing space as well. Oh, and anyone who was still convinced that Timeline LAX was just a waste of time, a diverting but ultimately pointless series of what-ifs? You just got served. Who better than our special time-unstuck Scot to bridge the gap between two different realities and set the course for what may be a very awesome flash-sideways wrap-up. Which is my way of saying I definitely loved this episode.

--Let’s just remind ourselves what Desmond’s gone through already. In “Flashes Before Your Eyes,” we learned that the (non)fatal electromagnetic kablooey from the Swan Station sent his mind careening back in time, and in the process, unlocked the potential of said mind. In “The Constant,” the Island’s mysterious invisible barrier threatened to undo Desmond’s mind altogether, but he saved himself by connecting with the anchor that held his life in place: Penny. Desmond is special. Very, very special. And certain people know this. “Happily Ever After” brought them all back, the ones who were linked to Desmond’s journey: Penny, Widmore, Daniel, Eloise, Minkowski, and even Charlie, who played a surprising and mesmerizing role in the new awakening of Mr. Hume. And although episodes that focus on a single character should be avoided this close to the endgame, I believe this ep was quite necessary. Don’t you agree?

--So, in the Jurassic Park-esque prologue, Widmore’s Mad Geek Squad (term coined by someone on Thefuselage.net) shoved Des into a big box and blasted him with lethal levels of electromagnetism, replicating the Hatch explosion to make sure that they had the right special guy (presumably, if they didn’t, the clean-up team would be on hand with big spatulas). Needless to say, Desmond was very unhappy to discover he’d been shanghaied back to the Island that had stolen so much of his life. But that energy blast took him, and us, into Timeline LAX, where Desmond David Hume was a very, very contented man indeed. Why wouldn’t he be? He’s Widmore’s right-hand lackey, he has nice suits, no irritating family and friends to tie him down. Why, Widmore’s even sharing his most expensive Scotch, irony irony irony! He’s living the high life, and he doesn’t even realize that his existence is utterly, utterly hollow. BUT....

--A breath of fresh air comes in the form of Charlie Pace the junkie-now-turned-guru. Tasked to babysit Charlie, who is meant to jam for the Widmores at a charity gig, Desmond soon learned that Mr. Pace was off his rocker, no pun intended. Yeah, when a guy grabs the wheel away from you and steers you into the ocean, that’s a pretty good clue that he has issues. See, sideways Charlie had himself a near-death experience on Flight 815, during which he saw the face of love, a face that presumably was Australian, pregnant, and craving peanut butter. And he knew that it was real....that he had discovered something crucial and important. And Desmond saw it too, in a flash of memory/vision/time travel that caused him to relive not only Charlie’s watery demise in the Looking Glass, but also the face of his own true love, a woman who, in this reality, he’d never met. BUT....

--We all knew that the meeting was inevitable, yeh? Rattled by Charlie’s words, and by a CAT scan that only exacerbated his memories/visions/etc., Desmond next found himself up against our Grande Dame of Time Travel, Mrs. Eloise Widmore (née Hawking). Remember the first time we saw Eloise in the ring shop, when she acted all nice and normal, then suddenly went all cold and CREEPY AS HELL? This was like that. She was all smiles until she saw Desmond was looking for someone named Penny, and then then the Grande Dame all but bit his head off, snarling that his curiosity was a VIOLATION and he was NOT READY TO KNOW. I’m wondering if Eloise is part of a sort of secret society of time-unstuck folks (remember that she’s linked to that priest from Desmond’s time as a monk), and if we’ll ever get a shot of a group of dignified people sitting around a dramatically lit table in a dim room, debating....The Desmond Hume Situation. Anyway, poor Des didn’t have a clue what she meant. BUT....

--Her son, Daniel, sure did! Trust Dan to have figured things out even in this timeline where he’s nothing but a mopey wannabe musician in a silly hat. Daniel nabbed Desmond and showed him more proof of love conquering space and time: after glimpsing a certain fire-haired British academic at the local museum, Daniel the mopey musician wrote pages of genius-level quantum formulae in his sleep. And this somehow led him to deduce that....he and those around him are not meant to be living these lives. Something happened to knock the timeline askew, and a whole new set of circumstances and events formed. Any doubts Desmond might have had -- and I assume he had plenty -- vanished with the revelation that Daniel’s half-sister is named Penny. So he found her jogging around a familiar-looking stadium at night, and for the “first” time, two star-crossed lovers met. And that was when it all came together for Desmond David Hume. BECAUSE....

--Back in Timeline ANKH, Desmond awoke, none the worse for wear. And he’s all smiles and nods and serenity. Widmore needs him for some scheme? Sure! Sayid pops up to rescue Desmond from the Mad Geek Squad? Lead on! No more anger, no more doubt or confusion. Desmond knows the way. He knows that some things are inevitable. The man who has struggled against cruel fate for so long, now knows that fate will run its course no matter what. What will happen...will happen (to paraphrase a line that Lost loves lately). Both timelines will come together. And Desmond has a VIP seat for the Event. Oh, but first, sideways Desmond has some work to do, and it involves the passengers of Oceanic Flight 815. Hell, yes, it does.

--And here we were worried that the show had run out of stuff for Desmond to do. Yeah, it sucked that he was absent for so long. But there was a purpose. Desmond is a lynchpin, a keystone in the show’s mythology. He is unique in his own way, a way that may stand outside the plans of even Jacob and his Nemesis. They may have their equation, but Desmond is one variable that will never....quite....fit. And that, I think, will be crucial in what is to come. Maybe it’s idealistic to say that love conquers all, but the idea, the idea of something that can trump all other factors.....that’s something worth loving for, or even dying for.