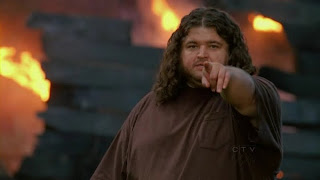 --First of all, best episode opener ever. This season’s had some awesome ep openers (epopeners?), what with Smokey-Cams and night-vision goggles and such. But all were trumped by....a Powerpoint presentation, narrated by Dr. Pierre Chang himself, on how awesome and wonderful Hugo “Hurley” Reyes is. Hell, if I were in charge of making Lost, that’s the sort of thing I’d put in! And I’m glad we got that comic sequence, because most of the ep, even the sideways flashes, were drenched, soaked, and saturated in smooth, oily dread. Watching people get blown up, tossed down wells, run over by cars, and march away to (likely) doom on a foolish terrorist mission -- fucking EEEEK. We’re in a Final Destination movie! Except, y’know, better written and not crammed with whiny twentysomethings.

--Awesome indeed, as we witnessed the Power of the Hurley in all its splendor. Dudes, nothing compares with the Power of the Hurley. Why else would Jack, Sun, and Frank follow the big guy despite their instincts to run as far away from UnLocke and his creepy grin as possible? Like the beginning of the ep made clear, Hurley’s a good luck charm. No matter what he himself might think. And those who don’t realize this are toast one way or another. They blow up. They get tossed down wells. And so forth. And then they remain, an invisible presence trapped by their own fell deeds, caught in the pocket of space that is the Island, discernible only as......Whispers. THEY TOLD US WHAT THE WHISPERS ARE. AFTER SIX SEASONS. And while I still have a question or two (why do the Whispers announce the arrival of the Others? What criteria makes a person into a Whisper?), my jaw dropped in delight. Check another long-simmering mystery off the list!

--So, Hurley hoped for Creepy Ghost Libby but instead got Creepy Ghost Michael. In his Creepy Ghost Hoodie. Telling Hurley that, the whole “blowing up Flight 316” thing? BAD. Black Rock TNT? BAD. As was demonstrated. Yes, we’ve had our first main cast list casualty of the season, and it just had to be the least important main cast member, Ilana, who went the way of the Arzt after making the mistake of no longer being relevant. As Ben snarkily proclaimed, the Island was done with her, because the Candidates can look after their own damn selves now. Richard had yet to grasp this, so he dragged everyone back to the Black Rock for more boomsticks....but Hurley got there first and blew it up. LOL! But all amusements aside, note how fucking courageous he was to go into that deathtrap and rig some TNT. This is why we should be following Hurley, people!

--Damn, even knowing Desmond wasn’t gonna die so abruptly, it was still so freaking tense to see the smirking, snakelike UnLocke lead the Scot into the wilderness to dispose of him. Because we all KNEW UnLocke was gonna dispose of Desmond; we could read it all over his predatory face. Timeline ANKH Desmond is still all smiles and passivity, unafraid even of the scariest man on the Island. And, significantly, another spooky ghost boy popped up to glare at a very perturbed UnLocke. Or was it the same ghost boy with different hair? Whatever, it didn’t stop UnLocke from showing Desmond a well (NOT the Frozen Donkey Well) and then chucking the poor guy down inside it. We know Desmond didn’t die (even without the shots of him in the teaser for next week), but things still look bleak. Unless all Island wells are connected and he turns the Frozen Donkey Wheel. Lordy, what would that do at this point?

--So, there was this one really weird flash-sideways featuring Kate, where she was all clean and shiny for some reason, and talking enthusiastically about Loréal shampoo. How baffling! What, is this some kind of dream sequence or...........oh.

--Richard, Miles, and Ben: so bloody doomed. I’m not really happy about Richard’s current kaboom-happy crusade, because I seem to recall him having this huge epiphany and rebirth ONLY THREE EPISODES AGO. During which time Hurley reaffirmed his faith. Only now Richard’s all Scoffy McSkeptic. Whatever....he’s lost most of my goodwill. But why are Ben and Miles following him? I’m thinking Ben might want to try and make his own deal with Widmore....or, more likely, kill the son of a bitch. And Miles? He’s got himself some diamonds, but they’re useless unless he can get off the Island, and Widmore’s got both a sub and a plane. Makes sense. But they’re still DOOMED. Because they spurned Hurley.

--And Hurley is not to be spurned. Libby knows it! In Timeline LAX, Hurley is a big kahuna whom everyone loves, but he’s still finding it hard to be happy. Then Libby appeared, radiant and unbalanced, to insist that she and Hurley knew each other once, in another time, another life. Wow, Libby (i.e., Cynthia Watros) has never looked more lovely. Her lonely soulmate was smitten, at least enough to want to see her again....and again. And again. Until finally, with a sweet, sweet kiss, the two of them made the connection we were waiting for, and Hurley too saw flashes of that other time and place, where he and Libby shared one brief, shining moment on an Island of mystery. I loved it, and I was biting my nails. Because tragedy is still looming, a black cloud over everything. I can’t be happy for all these lovebirds when I’m so scared for them, dammit! Well, at least sideways Libby lived through this ep. A good sign. I hope we see her at least once more, maybe learn why she keeps finding herself in the nuthouse. If only to shut the fanboys up.

--So, things end on a note both sweet and dire. Sweet, because Hurley and Libby are finally together in one timeline, and all of our original 815 survivors (minus poor Jin) are together again in another! Dire, because....well, because of EVERYTHING ELSE. Our heroes are united under the banner of UnLocke. Desmond’s down a well. Jin’s still a guest of Widmore. Richard, Ben, and Miles are heading toward a bad end. And, in a shocking last-minute flash-sideways, Desmond visited a certain elementary school and TOOK OUT SIDEWAYS LOCKE WITH HIS CAR. Possibly killing him....or maybe opening his eyes to something crucial? Revenge, or a really great idea? Holy shit, what if sideways Locke makes contact with the other timeline, the one where he’s dead and his identity has been co-opted by an evil quasi-deity. Those kind of implications are why I adore this damn show so much!

--Oh, yeah, there was another really bizarre flash-sideways, featuring Radzinsky, of all people! What the hell? He was still a shouty asshole, only how he was like some elementary school basketball coach, and I kept spotting actors from that Modern Family show, and..............oh.
Posted by Dang-Blasted at 6:52 PM