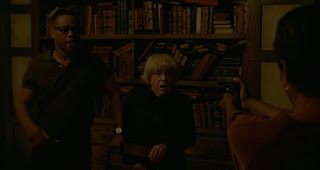 --Sorry for the delay. I had a houseguest. AHS is hard to explain to houseguests out of context. “Yeah, that’s Lady Gaga getting fucked doggie-style by the guy from Jerry Maguire, and...hmm? A raw pig’s heart? Yes, I do believe you are correct, but lemme try and fill in the narrative gaps...wait, come back!”

--Anyway, I’m sure we’re all very excited and not at all exasperated by Ryan Murphy’s recent, puckish announcement that partway through AHS: Roanoke there will be a HUGE and MASSIVE twist that will redefine the entire season and make our fragile brainmeats go kablooey. Place your bets. Maybe we’ll go behind the scenes of the “reenactments” and meet, for example, the actress who is playing Shelby Miller and is played by Sarah Paulson (kablooey). Or maybe it’s all a book being written by Dr. Cunningham from last week. Or it’s happening inside somebody’s head. Or the real Shelby, Matt, and Lee are in prison after a shitload of murders were laid at their feet.

--This ep pleased me: it left behind the haunted house scares for a meatier story and the right amount of exposition. Flora still hasn’t turned up, alive or dead. For some reason, the cops let Lee wander around looking for Flora despite the whole kidnapping thing. She and the Millers found the homestead of those darn-tootin’ hillbillies, who were gone, save for a couple feral ginger kids suckling on a pig’s teats. Pigs, pigs, everywhere pigs. The kids only knew to yowl one word: Croatoan. Flora’s dad, Mason, was highly displeased with the entire situation and accused Lee of spiriting Flora away. Wouldn’t you know, that very night, Mason was found hideously burned to death. And Lee had been absent from Terrorbithia at the exact same time, and had no alibi. This rather significant hiccup was interrupted when the unholy love child of Andy Warhol and Zelda Rubinstein strolled in.

--Cricket. We need to talk about Cricket. I’m not sure how I feel about him, because A) he’s doing the “kooky psychic” archetype in a manner that edges past knowing homage and into the realm of the ridiculous, and B) he’s a cartoon character in a story that has been reasonably serious thus far. The sudden tonal shift was not entirely welcome, though I’d never ding this show for surprising me, I guess. As played by Leslie Jordan, Cricket is a fey, androgynous little gnome who you definitely wouldn’t want to share a train compartment with, but he looked capable of reading the aether and locating poor Flora. His candlelit séance was intended to conjure up Flora’s ghostly BFF, Priscilla; instead, it brought forth a window-smashing Kathy Bates, and, again, that word: Croatoan. Cricket figured out where Flora’d gone and was willing to help further...to the tune of 25,000 dollars. Lee and the Millers were livid; Lee even pulled a gun on Cricket before common sense intervened. But when Cricket...

--Quick aside. This ep was a tour de force for Adina Porter as the real Lee (“ActuaLee”). Holy shit, where has she been? Her brief turn as a cripplingly boring psych patient in Murder House did NOT showcase her talent. Also, when ActuaLee had a meltdown, we got a glimpse behind the scenes of My Roanoke Nightmare. Foreshadowing? Who was the male voice asking the questions?

--Cricket made a reference to Lee’s first daughter, who vanished at age four (more foreshadowing?), and that convinced Lee to pony up the dough. Thus it was Cricket who finally tied this season to the lost colony of Roanoke. We now know the weird tale of Thomasin White, aka The Butcher, whose husband initially led the Roanoke colonists. In his stead, Thomasin ruled with an iron fist, and, well, the time period was unkind to independent women. The menfolk -- including Thomasin’s son, Ambrose (Wes Bentley) -- exiled Thomasin and left her to die in the wilds. She was saved by Gaga of the Woods, kickstarting some sort of unholy communion and exacting revenge with a meat cleaver. So Gaga’s the ultimate origin of evil this season? Sure, why not? The Butcher led the remaining colonists inland, hence their ghostly presence around Terrorbithia.

--His palms greased, Cricket contacted The Butcher and promised to keep future mortals away from Terrorbithia if Flora would be safely returned. Meanwhile, Matt wandered off, and Shelby found him balls-deep in Gaga of the Woods while some pervy rednecks looked on. He didn’t remember this event later (just as Lee didn’t remember possibly roasting Mason like a goose?), but Shelby threw down the next hand by calling the cops and having Lee arrested. Shelby’s a bit of a shithead, but can you blame her at this point?

--The shifting between serious horror and quasi-parody is an issue, but still, these awesome episodes feel way too short. I find myself scanning them for clues as to what might really be going on. Is anything as it seems? How many layers does the story have, or am I giving AHS too much credit? I’m ready for big twists, all right. Make them epic.
Posted by Dang-Blasted at 6:19 PM