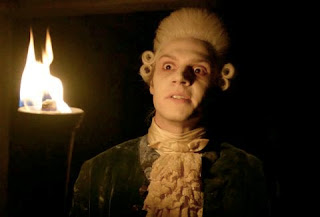 --Here’s your daily linguistic lesson. According to official sources, Gaga of the Woods’ name is actually “Scathach,” after a warrior figure from Celtic mythology. However, it’s surely no coincidence that the name is so similar to “Shachath,” the Angel of Death played by Frances Conroy in Asylum. Don’t ask for pronunciation; the internet can’t even agree on the correct spelling of “Thomasin.” But Frances Conroy (Frances Conroy Frances Conroy FRANCES CONROY) returned to AHS this week. And if you connect all these dots, they form a picture of a rubber duck!

--Seriously, though, Roanoke is aiming to be all seasons at once. There’s a Reddit theory that each episode chronicles the show thus far. Chapter 1 was Murder House: Fraught couple moves into a haunted mansion. Chapter 2 was Asylum: Creepy nurses and their ill-fated patients. Chapter 3 was Coven, with the introduction of witchy magic and the return of Leslie Jordan as a “magic user” of sorts. Next came Freak Show, tying Terrorbithia to the Mott family. And this week?

--Fucking brutal. The conclusion(?) to the Millers’ tale of woe was cruel, nasty, grungy, and brutal. And it wasn’t the stylized, borderline-goofy brutality this show often depicts. Horrible, vicious things happened to innocent people. Less Dario Argento, more Eli Roth. First, however, the Hotel allusion: we met the weirdo who built this year’s edifice of evil, and once again, he’s played by Evan Peters with a funky accent!

--Yes, Edward Phillipe Mott loved art, disliked human contact, and wanted a remote, isolated haven, a monument to himself, where he could enjoy his collection of priceless paintings -- and the attentions of his swarthy black lover. (“Let’s rouge each other’s nipples!”) So we did get Evan Peters naked, but we didn’t see his butt, so this season of AHS is not yet complete. When The Butcher and co. began their pranks, they targeted Edward’s art collection, and his resulting violent tantrum foreshadowed the lineage of shrill, entitled psychosis that would eventually culminate in Dandy Mott. That night, The Butcher sacrificed Edward in her usual over-the-top manner (impaled and burned alive), while the household staff starved to death, locked in the root cellar. Mean!

--We weren’t done with Edward yet, however. Still trapped, Shelby, Matt, and Flora had to fend off assaults from various phantoms, including a spidery little Asian girl in full-blown Ju-On mode. Shout-outs to specific horror genres are always welcome! Luckily for the Millers, Edward appeared in the basement and led them through some hidden tunnels, out of the worst danger. Briefly. In the woods, the Millers stumbled into the clutches of those damn dirty rednecks, the Polks. Remember them? Mama Polk made her appearance and was Frances Conroy! Hallelujah! She was only absent for one season, but it felt like an eternity! Also in attendance was Dr. Cunningham, who the Polks had kept alive just so they could eat segments of him. Mama ended his misery with a hammer to the face (mean!), so there goes my theory that he was a ghost. Mama also explained how her family had a deal with The Butcher...and sometimes brought her sacrifices. Well, FUCK.

--Yes, that’s Chaz Bono as the chubby, cognitively-impaired Polk. Proving that it’s possible to put a transgendered person onscreen without them being a cold, beautiful mannequin played by a Swinton or a Cumberbatch. Get a clue, Hollywood.

--Meanwhile, Lee spent 48 hours being grilled by her former fellow cops -- the span required to charge someone with a crime, and also a convenient time-delay for when you need a character to be offscreen for awhile. Free once more, Lee found a bajillion panicked messages from Matt on her phone. Here she comes to save the daaaayyyyy!

--Meanwhile meanwhile, Matt tried to escape the Polks’ clutches and killed one of them. In retaliation, Mama Polk obliterated Shelby’s fibula with a sledgehammer (MEAN!) before taking the Millers right back to Terrorbithia and the blazing bonfires and torture racks The Butcher had built for them. Alas, The Butcher did not comment on Mama Polk’s magical, ill-smelling horseless carriage emblazoned with the sigil of the god they call Chevrolet. Shelby, Matt, and Flora certainly looked doomed...and I even wondered if the big twist is that they did die, and the “real” Shelby and Matt are actually ghosts, telling their tale to a very ballsy documentarian. Nope! This time around, it was Ambrose who revolted, tackling his evil mother into the bonfire while Edward untied our heroes and Lee ran over the Pigman with a car. Badass. A flaming Butcher chased the Millers from Terrorbithia...and they never looked back. They got away with their mortal lives intact, and all that remains are the memories. And the nightmares.

--I have not seen any promos for next week. And I don’t want to. I wanna be unspoiled, and therefore delightfully surprised (or disappointed) by whatever Roanoke throws at us next. I mean, this was definitively the finale to the Millers’ story, wasn’t it? What comes next? Hell, what’s even real? Keep in mind that we’ve been watching “re-enactments,” which means that everyone within them is a merely an actor, playing a role. A version of Shelby and Matt Miller’s tale, but not the real thing. So...all bets are off. Heh heh heh.

--PS: That lady historian at the beginning of the ep is an actual person, Doris Kearns Goodwin. No wonder she couldn’t act.
Posted by Dang-Blasted at 2:01 PM