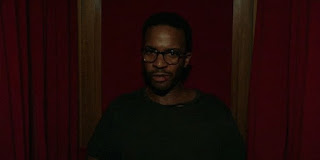 --I guess now we know the difference between real ghosts and fake ghosts. Fake ghosts are “characters.” They may be scary and deadly, they may scream and gibber, and they may be coated in blood and ichor...but they are, on some level, meant to entertain. Real ghosts, though...real ghosts are faceless shapes, distantly glimpsed. They don’t talk or explain themselves. They just haunt. They just attack. In a sense, American Horror Story is admitting that the past five seasons have been fakery, and now we’re seeing the real deal. But, in trying to scare us even more deeply, it still aims to entertain us. Is this ridiculously meta or what?

--This was the episode of the Twist. The Twist that Ryan Murphy was so excited about, he was stuffing his fist in his mouth to keep from revealing. The Twist that...in the end...wasn’t too hard to figure out. Let’s face it, of all the directions Roanoke could have gone, plenty of people (myself included) considered this particular possibility. However, the way they’re handling the paradigm shift, the way in which this episode mixed black humor and real dread, bodes ever so well. If the first half of Roanoke paid homage to lurid TV documentaries “inspired by true events,” these next episodes blow a raspberry at reality TV in all its awful glory.

--Due to the brand-new storyline, I’d better include all the real actors’ names again, or we’re gonna get super confused. So. My Roanoke Nightmare was a smash hit and garnered everything from fan conventions to multiple Entertainment Weekly covers, which I highly doubt would happen with a five-hour miniseries, but whatever. We met the show’s charming and utterly amoral creator, Sidney Aaron James (Cheyenne Jackson), who was pitching the next iteration of his brainchild. He wanted to recruit both the real Millers and the actors who played them, stick them back into the real Terrorbithia, and let the sparks fly. As Sidney explained to his increasingly appalled assistant, Diana (Shannon Lucio), the house would be filled with cameras, which the residents would know about, but would also contain an assortment of remote-controlled fake scares, which they wouldn’t know about. Sidney is a creep, and his supposedly noble justification was that he wanted to tie up the original’s loose end: who killed Mason? If he could scare a confession out of Lee (Adina Porter), the audience would eat it up.

--Of course, getting the gang back together had its hiccups. Shelby Miller (Lily Rabe) had tried hard to put the past behind her, but she and Matt (André Holland) were on the outs, in large part because Shelby had a brief fling with Dominic Banks (Cuba Gooding Jr.), the actor who played her husband. Shelby hoped that Return to Roanoke: Three Days in Hell would allow for a reconciliation. Sidney assured her that Dominic wouldn’t be involved, and was lying through his teeth. Then there was the matter of Agnes Mary Winstead (Kathy Bates), who played The Butcher. She seemed like such a pleasant lady...but the truth was, she’d gotten so deeply into the role that her brain short-circuited and she became prone to furious, schizophrenic outbursts. Sidney forbid Agnes from coming anywhere near the sequel, but inwardly, he was counting on it.

--Needless to say, haunts began a-hauntin’, and were somehow more unsettling than the shocks from the first half of the season. Pig fetuses were found. A crewman “accidentally” chainsawed through his own neck. Diana had enough of Sidney’s sociopathic behavior and quit, only to be run off the road by the Pigman, her body subsequently missing. Still, Sidney’s gaggle of victims soon arrived. We had the triangle of Shelby, Dominic, and Matt...who was still so haunted that he walked in already expecting horrors. There was Lee, her life ruined by the way My Roanoke Nightmare implied her guilt. Completing the dysfunctional tinderbox were the boozy Monet T-Something (Angela Bassett), who played Lee; Rory Monahan (Evan Peters), the redheaded doofus who played Edward Mott; and Audrey Tindall (Sarah Paulson), the rather snooty Brit who played Shelby.

--Yes, Sarah Paulson now has a British accent, which seems weirdly inevitable. Also, Audrey and Rory were happily married, never a good sign. It wasn’t long before the seven stooges were passive-aggressively dissing each other and getting into fights. Matt hated Dominic. Shelby was picked on. Lee and Monet each held the other responsible for her woes. This is a remarkably scathing attack on reality TV, which encourages the worst in its participants (both regular joes scrambling for a shot at fame and Z-list actors clawing at a higher tier of recognition), manufactures drama when there isn’t any, and repeatedly tears at the scabs when there is. It’s AHS social commentary in fine form. And everyone’s gonna die!

--We literally know this. As the houseguests tried to settle in, pig-faced men and colonial phantoms popped up here and there. They glimpsed Agnes in full-on Butcher mode. Is she actually lurking about, and if so, is she a red herring? Probably. Before the end of the hour, blood was shed. Alas for Rory: an old bit of foreshadowing paid off as two rotting nurses appeared and slashed him to death. “MURDER” written on the wall in blood. “R is for Rory,” Matt announced to the others, his dead tone of voice making it clear he knew this was coming. Expect lots of British-accented screaming next week, as well as more death. As a title card informed us, every participant in Return to Roanoke -- except for one -- died horribly. Place your bets on who survives, and hope Sidney is among the casualties, because I think we all want to see him eat a meat cleaver.

--This season is just so damn fun. And remarkably damn scary. Two for two! My current prediction is that Lee will survive, but all the other deaths will be pinned squarely on her. Given the mean spirit of Roanoke, it would fit.
Posted by Dang-Blasted at 1:57 PM