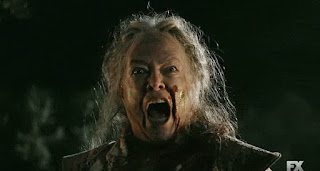 --“Only men with full bellies have the luxury of conscience.”

--These two lines, both spoken in last night’s episode of Roanoke, seem to perfectly sum up the human condition, don’t they? Especially when you consider that the first speaker ends up savagely eviscerating the second speaker. The philosophers would surely cheer.

--I’ve noticed that these episodes are building toward a very obvious climax that should be arriving very soon. Like, next week. Which makes it all the more likely that Roanoke is going to massively redefine itself somehow. Here’s an interesting theory: What if it’s all fake? What if My Roanoke Nightmare is entirely fiction (within the fiction of AHS, I mean), and even the “real” interviewees are hired actors? But then, when they all head out to the North Carolina woods to film fake scares for their fake documentary, a bunch of real spooks descend? And one of them is Evan Peters and he’s naked? Eh?

--More on Thomasin White and her merry band. The word “Croatoan,” it seems, has magical power; it’s like a verbal talisman. The Roanoke folk carved it into a tree at the site of the original colony, apparently just to confuse future generations (and it worked!), before moving deeper into the island and establishing a far more successful colony. Fields of corn! Bountiful feasts! And all it took was the occasional human sacrifice. Poor little Priscilla getting her skull caved in was surely a small price to pay. Hey, didn’t Shirley Jackson write a short story about this? Anyway, Ambrose eventually got sick and tired of the murder and turned the colonists against Thomasin a second time. But then she was all like, “I’ve totally seen the true light of God!” and they were all like, “We believe you without question even though you’re obviously evil and insane!” and then Thomasin fed them all poisoned apples, hacked them to death (Ambrose first), and offered her own life up to her mentor, Gaga of the Woods. More on Gaga of the Woods in a sec.

--Back in the present, Matt and Shelby snuggled and made up after last week’s strife, but Terrorbithia’s haunts were about to ramp it up. The Pigman appeared and chased them around with a knife, but was foiled by none other than Dr. Elias Cunningham, still alive. He’d maintained ownership of Terrorbithia for years, trying to keep innocent people away, but then...something about tax fees...and it wound up for sale. Cunningham showed the Millers some examples of the house’s past victims: hunters who’d shot themselves; a family of Asian immigrants (who got way too much screen time...guess a show needs its filler); the psycho Jane sisters. All done in by The Butcher’s band. One very noteworthy fact: the house was originally built by a man named Mott. Yes, fucking MOTT. As in, those rich inbred psycho assholes from Freak Show. More key trivia: there’s a six-day period in October when the moon turns red and the ghosts, usually reduced to scampering around acting scary, can kill. And guess what, Matt and Shelby? The maraschino cherry moon is nigh!

--I have a sneaking theory about Dr. Cunningham. It occurred to me when he and the Millers were in the woods, looking for Flora. They did find her, playing and/or being tormented by various specters. During this confrontation, Cunningham was shot with arrows by some ghost or other -- not the first time we’ve seen him get maybe-killed. Okay. My theory is that Cunningham is already dead. He’s a ghost. After all, if he’s trying to keep people away from Terrorbithia, why the hell didn’t he turn up to warn Shelby and Matt sooner? He’s a good ghost, more or less, but trapped on the property just like the rest. I’m not sure how the “red moon” thing ties into the overall AHS rulebook about ghosts. I thought they could kill you whenever they felt like it. Could Cunningham be full of shit? Regardless, he was full of arrows, prompting the Millers to flee back to the house, where they were greeted by the hybrid spawn of Edna Mode and the grandma from the Addams Family. By which I mean Cricket.

--One popular theory about ghosts is that they desperately want their stories told. Gaga of the Woods certainly does, though she might be a magically enhanced immortal, not a ghost. Gaga took Cricket on a tour through history, and later, as night fell, she lured Matt out to the root cellar and magic-roofied him. Then we learned Gaga’s story: she was a Druidic lass from the British Isles who stowed away on an ill-fated voyage to the Americas back in, I dunno, the 1500s or something. After murdering everybody else (as usual), Gaga embraced the wilderness, and her own Druid faith combined with the natural, organic, GMO-free magic of the New World to form a brand-new flavor of vaguely-defined spirituality. And then she founded the hidden wizarding school of Ilvermorny, but that’s a screenplay for another day.

--In the present, Gaga’s goal was to have awesome sex with Matt, but he managed to stay faithful this time. He returned to Shelby’s side and they watched as The Butcher emerged with her torch club...and prepared to sacrifice Flora. Luckily, Priscilla was all like, “This is for killing me with a rock that one time!” and little-girl-punched The Butcher, allowing Flora to escape. So Flora’s safe, only not really, because she, Shelby, and Matt are still trapped in the house. The episode ended with the horrific death-by-disembowelment of Cricket, who, in the end, was a decent man who really wanted to save Flora. Not bad for a guy who looks like if Lucius Malfoy suffered a transporter malfunction with a cockapoo. Cricket’s death was one of this show’s cruelest ever, but just remember: under the laws of ghostdom, his spirit might still stick around, hitting on Uber drivers for years to come.

--So next week is apparently going to be very action-packed, and then...who the hell knows? Chapter Six is when we’ll find out what’s actually going on, maybe...and it’ll be directed by Angela Bassett! Recompense, perhaps, for giving her lame, pointless roles for the past two seasons. I know I wouldn’t want to be on Angela’s Bassett’s bad side. She can kill people with her upper lip.
Posted by Dang-Blasted at 2:04 PM