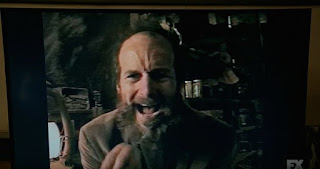 --Dafuq are you doing, Cuba Gooding Jr.? You find a flaming effigy made of boughs and pig parts, and your response is to flail at it with a baseball bat? Do you want forest fires? Because that’s how you get forest fires. This isn’t Rat Race 2, guy.

--This season of AHS is my dream in terms of casting choices. Sarah Paulson is basically the main character, Angela Bassett’s finally playing somebody who fucking matters to the plot, and Lily Rabe is back full-time! (Though all she’s done so far is mumble in front of a gray backdrop. Lame.) As for Kathy Bates, she’s truly the queen of impossible-to-place dialects. Was that, like, Welsh or something? Kathy seems to be some type of tribal/colonial cult leader babbling about the mire and muck...or, as she put it, the MYRRRR and MOOOK. Picking up from last week, Shelby lurked in the bushes while Kathy and her torch club stuck a pig’s head on a dude and burned him alive. There’s the pigman from Murder House and the human/animal magic from Coven, so if you’re playing an AHS drinking game, knock a couple back.

--Funnily enough, our two main ladies switched roles this week. Shelby’s resolve hardened; the hauntings must be that dreadful redneck family playing pranks, and she’s not gonna turn tail. Good thing, because the Millers are stuck: they sunk everything into Terrorbithia and reselling would leave them destitute. Meanwhile, Lee has gone off the deep end. The trouble began when Lee’s daughter, Flora (Saniyya Sidney), came to visit. Kids in haunted houses, yikes. Sure enough, Flora began spending her free time in a closet under the stairs and talking to an invisible girl named Priscilla who claims that everyone in the house will soon be horribly slaughtered. Eh, I’m sure she’s just an energy-based life form struggling to understand us. Witnessing this, Lee’s ex-husband angrily dragged Flora away, and a despairing Lee hit the bottle hard. Cue the sad trombone.

--Lee also suffered some fresh scares, including bloody, squirming pig tails nailed to the wall, and a pair of unsettling nurses. Matt saw the nurses murdering an old woman. Mysteries abound! But not for long. A ghostly girl (Priscilla?) led Shelby and Matt to a root cellar in the backyard where they found a fresh VHS tape. On the tape: Denis O’Hare, bearded and babbling. He is Dr. Elias Cunningham, an author who moved into Terrorbithia to research past crimes. If you could follow his mile-a-minute exposition, you’d learn all about Miranda and Bridget Jane (Maya Rose Berko and Kristen Rakes), sisters who made Terrorbithia an assisted living home. Their true goal: to snuff residents in such an order that the first letters of their names spelled the word “murder.” That is such a bizarrely specific act of crazy that I really hope there’s an explanation for it. The Janes vanished, done in by a force even darker, and Dr. Cunningham’s video ended with him venturing back into the house and getting maybe killed by something-or-other. Matt tore down some wallpaper and found “M-U-R-D-E” inscribed on the wall. Key foreshadowing: the final R is missing. Has anyone with an R-name turned up yet? They dead.

--It would seem that every episode of Roanoke will end with a cliffhanger, which I like because it’s perfectly appropriate for the lurid TV documentary it aspires to ape. Fearful of losing custody of Flora, Lee essentially kidnapped her daughter and brought her back to Terrorbithia. Shelby and Matt did their best to clean up this hot mess, but Flora had enough time to vanish in the woods. Our three stooges went searching, and found Flora’s sweater hanging from the top of a very, very, very, very tall tree. Custody rights are now the least of Lee’s worries.

--Two eps in, and still going strong, though I’m getting a little sick of repetitive scenes in which people creep through hallways after strange noises. I’m glad they’re trying to have a logical reason for why Shelby and Matt don’t just move the fuck out (actual reason: they’re characters in a horror story). And, gosh, we still haven’t seen hide nor hair of Cheyenne Jackson or Evan Peters. It’d be funny if Jackson was the “real” Dr. Elias Cunningham in interviews. “Wait, I’m a bronze archangel of handsomeness and you have me played by Denis O’Hare the human ferret? Libel!”

--In the end credits, I noticed “special guest star” Lady Gaga. Apparently she was the crazed, antler-wearing person who scalped the guy in the first scene. Eh, she’s done weirder shit at the VMAs.
Posted by Dang-Blasted at 10:53 AM