To Squee Or Not to Squee: Kung Fu Panda 3 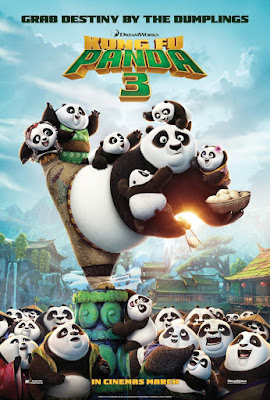 It’s another one from the Cautious Enthusiasm backlog! And before anyone says anything...yes, I incorrectly stated that Mads Mikkelsen and Rebel Wilson were in this movie, but only because, at the time I made the initial post, they fucking were. Blame fickle acting schedules.

Now. Let me make a confession for which I’m not at all sorry. I don’t like pandas. I don’t find them appealing. Yeah, they’re cute, but they’re also stupid, belligerent creatures that natural evolution does not favor. When you only eat one plant as food, when you can barely figure out how to fuck and tend to eat your own newborn cub because you don’t know otherwise...you’re at a dead end. And now we’re pouring oodles of time and resources into trying to save the wretched species from extinction, China is cheerfully bartering panda cubs to other countries in return for uranium (seriously. Look it up), and it’s all because we’re stupidly in love with pandas even though they are NOT WORTHY OF OUR LOVE. I don’t care who hates me for this. I don’t like pandas at all.

That said, I like the Kung Fu Panda movies a whole lot. Dreamworks doesn’t always produce winners, but with this franchise, they’ve got a really good formula and the boundless opportunity to produce gorgeous, exciting animation. The setting, a highly stylized version of ancient China, allows for every cherry blossom, lily pond, phallic mountain peak, and swooshy martial arts move to be given the attention it deserves. The KFP series follows Po (Jack Black), a corpulent panda who is chosen to be the Dragon Warrior and protect his valley from the forces of evil. Though he may seem a terrible champion, Po has his own unique brand of floppy, improvisational, oddly effective kung fu; one of his greatest strengths is that he can’t believe all the awesome stuff he gets to do. Assisting him are the Furious Five: Tigress (Angelina Jolie), Monkey (Jackie Chan), Mantis (Seth Rogen), Viper (Lucy Liu), and Crane (David Cross). Their mentor is the cranky, wisdom-filled, occasionally insecure Master Shifu (Dustin Hoffman). 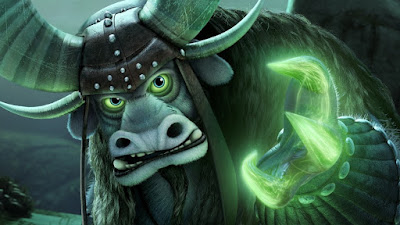 But you knew all that already. Recapping the premise is tedious, I know. The first two movies weren’t just beautiful and reasonably funny, they achieved a surprising amount of emotional resonance here and there. Po is the only panda in the world, as far as he knows -- raised from infancy by a loving duck named Ping (James Hong), who runs a noodle shop. Eventually, he learns the truth, and Kung Fu Panda 2 has one scene, in which Po remembers what happened to his mother, that actually makes me cry a little. Which is not what I expected from a movie full of fat jokes. The question is, could KFP3 possibly be as good or profound, given the tendency of animated sequels to get progressively lazier? Well...no. It’s not as good as the first two movies. But I figured. This time around, the valley's period of peacetime is broken by the arrival of undead bad guy General Kai (J.K. Simmons), who looks like a horned and hoofed Genghis Khan, who dual-wields swords on chains like he’s freakin’ Kratos, and who has a habit of vacuuming up the chi of other kung fu masters and turning them into skittering jade golems.

That’s all sorta cool, but Kai is not as compelling a foe as Tai Lung or Lord Shen from the previous films. He has a very perfunctory vendetta indeed, and Simmons voices him like a douchey college football jock. (The running gag is that Kai expects everyone to know who he is, and no one does.) Po and co. are all that can stand between Kai and blah blah blah. But, in the meantime, who should turn up but Po’s biological dad, Li Shan (Bryan Cranston), who reveals the existence of a secret panda village. Why, pandas are known for their ability to manipulate chi! Po can learn how to defeat Kai and reconnect with his species! Thus, a huge chunk of the film takes place in the hidden village, and...ugh. After three films, I have come to like Po. And Cranston is very good as Li. But we didn’t need an entire mob of goddamn pandas. They’re presented as genial, roly-poly nincompoops who live in their own private eden of gluttony, and they are not as funny or lovable as the filmmakers seem to think they are. At times, the endless fat/dumb/lazy jokes border on grotesque. Kate Hudson pops up as a she-panda who wants into Po’s pants; luckily, the KFP team seem to have realized what a terrible subplot that was and written most of it out. 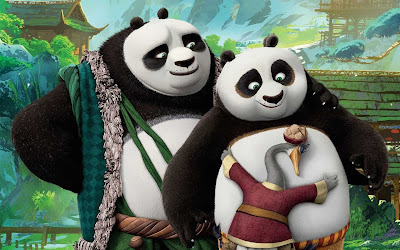 A big issue with this series is that each movie’s plot is more or less the same. Po doubts himself, everyone else doubts Po, and then Po unlocks some new level of kung fu coolness to defeat the latest baddie. I was okay with KFP2 rehashing Po’s journey because of the time and respect given to the darker elements of his past. But...now what? Isn’t Po already the Dragon Warrior? What the hell else does he need to learn about himself? How to be a panda? Pandas suck, and this film doesn’t make me like them any more. The character I really relate to is Po’s adoptive father, Ping, who plays a prominent role here but doesn’t get enough real emotion. In the earlier films, we saw how devastated Ping was at the thought of losing Po. Here, he’s too often reduced to a comical worrywart. Still, they avoided making Ping and Li into rivals, which was nice, and by the time the film got to the line, “Po needs his two dads!” I realized how subversive things had become. Yeah, they went there. Sort of. Good for them!

Anyway, I should make it clear that this is still a really fun movie. It’s no less beautifully-animated than the first two, and by throwing in supernatural elements, they’ve taken their visuals to new, eye-popping heights. And the cast do a great job, when they can. The Furious Five are still given very little to do, sadly. But Hoffman’s Master Shifu has a meatier role here than in KFP2, and Jolie’s Tigress is still in a league of her own. Seriously, I fucking love Tigress. I love how subtle the animators make her, how she leaves things unsaid, how she shows her fondness for Po in tiny ways and knows exactly when he needs a pep talk or a kick in the ass. I bet these actors really enjoy returning to voice their characters. 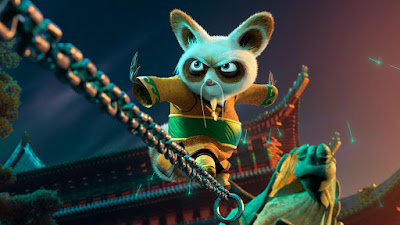 I just hope their interest doesn’t wane. Because I’ve heard Dreamworks wants to make three more KFP movies. Why? Didn’t I just say that KFP3 doesn’t really add much to Po’s personal journey? Okay, yeah...it does bring his Dragon Warrior arc to a sweeping pinnacle. There is grandeur and emotional power to be found here...but practically every serious moment is interrupted by a lame joke or pratfall in short order. It’s an insult to our intelligence. We do get a pretty awesome climax (well, two climaxes -- the real one and the dumb, slapsticky one), and an ending that seems extremely definitive in terms of where Po stands and how happy everyone is. Three more films? How could they not seem forced? Just as the Shrek series should have ended after the second one, Kung Fu Panda really ought to be a trilogy and not a damn sextology. But it’s not up to me, it’s up to box office receipts, as usual.

But Kung Fu Panda 3 is good. It’s not quite on par with its predecessors, but it’s perfectly entertaining, visually outstanding, well-voiced, and not too lazy. And if, like me, you find its overuse of chubby, mentally deficient pandas to be obnoxious, keep in mind that I’m a bitter party pooper who wishes he wasn’t about to turn thirty. Ugh. At least kids these days have quality stuff like Kung Fu Panda as well as pandering, lowbrow shit like Angry Birds. It could always be worse.

VERDICT: The third squee in a series isn’t the loudest, but it’ll do. 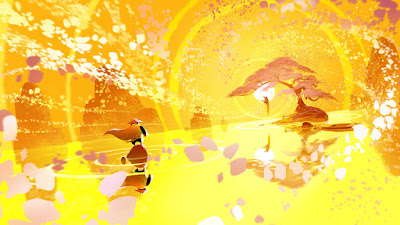