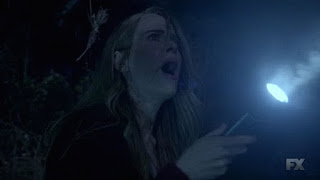 --Worst season of American Horror Story ever, am I right, guys?

--Hah. Not likely. But since hating on this batshit little show is probably more trendy than ever before, I figured I might as well throw a bone to the haters before making any serious effort to discuss the Season Six premiere. There is much to discuss, mainly because we had little to no idea what was coming. Like, at all. You may have heard: this year, the AHS showrunners decided to play a different gambit. Last time, it was all about the shameless stunt-casting of Lady Gaga. For Season Six, they went the other way, into the shadows. The great unknown, which is what scares us most, right?

--Yes, Season Six came shrouded in mystery, only slightly spoiled by leaked set photos and the online multitudes squalling, “It is Roanoke? IT’S ROANOKE! IT TOTALLY IS!” The posters and teasers hit us with a creative mishmash of red herrings, artsy doses of micro-horror that paid homage to the entire genre. We had spiders crawling from eyeballs, demon rednecks, amateur surgery, scarecrows, monsters, possessed dolls, Leatherface, The Creature from the Black Lagoon, the Children of the Corn, and Gordy, the talking pig from the ill-received 1995 family film of the same name. I may be misremembering that last one. But it was all intended to mislead and to get the hype machine a-chuggin’. What would Season Six really be about? And are we invested?

--Well. I’ve long said this show needed to really reinvent itself hard, and this may be the closest we get. The premiere felt pretty bare-bones compared to the blood- and sex-fluid-drenched spectacle of AHS: Hotel. Yeah, fine, this year it’s Roanoke. If you suck at history, Roanoke was an English colony established on a North Carolina island in the 1500s. The entire colony vanished without a trace, save for the word “CROATOAN” carved in a tree. It’s one of those mysteries that has more or less been solved (the colonists most likely moved elsewhere and intermingled with Native Americans), but enthusiasts of the paranormal love to speculate about aliens, time travel, etc. Roanoke is beloved by hack documentarians, which is quite appropriate...

--...because this season is a freakin’ mockumentary! Titled My Roanoke Nightmare, it provides a pitch-perfect homage to/parody of shows like Paranormal Witness, in which ostensibly real people recount their ghostly encounters and actors reenact the events they describe. I like it. It’s different. And I totally, sort of, a little bit, predicted that AHS might try this approach! So. Season Six (so far) is about the series of unfortunate events befalling Shelby and Matt Miller, played in the reenactments by Sarah Paulson and Cuba Gooding Jr. We also see interview footage with the “real” Shelby and Matt, played by Lily Rabe and André Holland. Confused yet? Shelby and Matt were happy as clams until a terrible gang attack and a miscarriage. Broken and reeling, they sought to reboot their lives.

--Thus, the Millers came to inhabit this season’s evil edifice, a very old colonial manse in the middle of a vast North Carolina forest. Nature! Peace and quiet! Shelby can do her yoga in the light of the pancreas-shaped windows and indulge her gluten-free diet in the way-too-huge kitchen! Buildings like this can’t not be haunted, and the Millers -- but mostly Shelby -- were soon experiencing spooky shit. Items moved by themselves. Something outside squealed and shrieked and flung garbage cans. In a very cool and freaky scene, human teeth rained from the sky. Unless Shelby was just off her rocker. She drinks a lot of wine, after all. And Matt was more inclined to suspect the gang of hillbilly stereotypes who’d also wanted to buy the house. Were he and Shelby being targeted because they’re an interracial couple? Maybe. Can AHS leave race issues alone for five seconds? Of course not! I did like how they nailed the subtle daggers of modern racism (that cop never would have drawled, “You her husband?” at a white man) while also making Matt a bit of a douche who was quick to take umbrage. The world of today, huh.

--Matt wanted someone to look after Shelby while he was on business, so he installed his sister, Lee, an ex-cop who got fired for her painkiller and booze addictions. How I smiled when Angela Bassett appeared. All is well in AHS land. Bassett is Lee in the reenactment and “real” Lee is Adina Porter, last seen all the way back in Murder House. Lee thought Shelby was a bit of a dumb honky. But she was more than reliable when dudes with torches started breaking into the house late at night. They, or somebody, left a video playing in the basement; it depicted a man hunting a humanoid creature with a pig’s head. Or was it just a pig mask? Ultimately, the torch club didn’t harm Shelby or Lee, but they did leave Blair Witch stick figurines hanging all over the house, as one does.

--Suitably hysterical, Shelby tore off in her car, only to run over Kathy Bates. We only caught a glimpse, but it was definitely Kathy Bates. Shelby chased Kathy into the woods and found more stick figures, then witnessed the ground itself breathing like it was blanketing some vast, slumbering giant. I dunno what to make of that, but it’s bizarre and neat, so I’ll roll with it. The torch club reappeared (one of them looked a lot like Wes Bentley), and the ep ended with Shelby screaming her butt off at a guy with his scalp missing and his brain exposed.

--So here we are with an inkling as to what Season Six is about, and a multitude of questions. My big concerns have to do with this mockumentary format and if it can last a whole season. Will they stick with it? Drop it after a bit? Weave in the stories of other rubes who tried to live in that remote colonial armpit? Shit, will we even get real opening titles? No clue. But the teasing, cryptic build-up to Season Six seems to have worked, because I had no idea what to expect and I really liked each new surprise and familiar face. Compared to the last, like, three seasons, this is bold. And scary-fun. Whether it will stay bold and scary-fun remains to be seen. I’ll give it the benefit of the doubt.

--I need a name for the haunted colonial house. I’m gonna call it “Terrorbithia.” Heh.
Posted by Dang-Blasted at 7:22 PM