Can you stand yet another bleeping post about American Horror Story? No? Okay, here’s yet another bleeping post about American Horror Story. As we know, it’s an anthology show, which means that each season is basically a self-contained story, although some actors, most notably Jessica Lange, reappear in different roles. So far, this has worked out very well; a third season has been ordered and Lange, at least, is confirmed to return. The big question on the lips of all AHS fans (besides “When do we get to see Evan Peters naked again?”) is, “What will Season Three be about?” I’ve got some ideas! Wanna hear them? No? Okay, here they are! 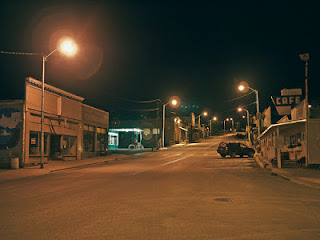 Small Town Terror
The show’s all about archetypes, and the American horror genre loooooooves the archetype of the small town. Y’know, the kind of place that huddles within the mountains or in the middle of a flat, Midwestern wasteland. The American dream personified -- and then turned on its head when the town is ravaged by something unspeakable. Roughly eighty percent of Stephen King novels have this plot. The townsfolk all know each other, and secrets abound, leading to all sorts of mystery and red herrings. There’s two possible scenarios: either the town is harboring a horrifying conspiracy (The Stepford Wives, Village of the Damned) or the town must band together to survive a frightening siege (The Blob, Tremors, most movies about giant bugs). Knowing AHS, we might get some of both. I personally think this is the most likely option for the show, in part because it just begs for a killer ensemble cast.
Returning Cast:
Denis O’Hare as the sleazy, corrupt town mayor. Connie Britton as his boozy wife who drinks to forget. Fredric Lehne as the evil developer who wants to turn everything into a strip mall. Zachary Quinto and Lily Rabe as the fresh-faced new couple in town, who are about to be put through the wringer. Jessica Lange as a crazy cat lady who lives in a decrepit manor and knows all the juiciest gossip. 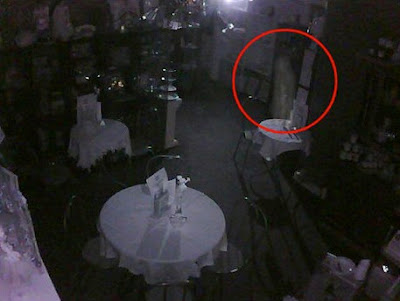 Monster/Ghost Hunters
There’s this ongoing fad for TV shows in which overdramatic dudes wave cameras around in remote forests or abandoned pulp mills, looking for evidence of the paranormal. These shows can get pretty silly (“It wasn’t until we looked at the footage later that we noticed this FLYING WHITE BLOTCH!!!!!”), but it’d be pretty amusing to see AHS take on the genre. We follow a feckless film crew as they hunt for monsters or ghosts or whatever, and then witness them gradually lose their cool as shit starts getting real -- until what they are recording is a fight for their own survival and sanity. This would be a departure from the style AHS has shown so far, but I’d dig it. They’d be paying homage to the new wave of found-footage horrors that began with The Blair Witch Project and was kicked into high gear by Paranormal Activity. Not that they should rely entirely on handheld footage. Just have some. Poke gentle fun at monster-hunting while throwing lots of jump-out-of-your-seat moments at us. And Mothman. Put Mothman in there somewhere; I love that guy.
Returning Cast:
Evan Peters as the hotshot, douchebaggy star of the show. Chloë Sevigny as the snarky, heavily tattooed sound lady. Michael Graziadei as the dumb yet lovable cameraman. Ian McShane as a rugged outdoorsman with a thousand-mile stare. Charles S. Dutton as a long-suffering local sheriff. Jessica Lange as a ball-busting studio exec who (unwisely) flies out to the boonies to protect her investment. 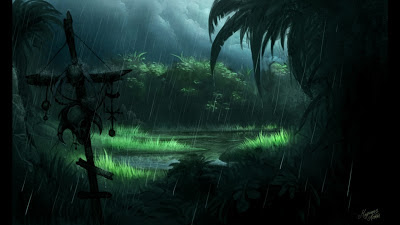 Southern Gothic
Visit the deep South, AHS! It’s a treasure trove! Alligators, voodoo, death cults, crumbly old manor houses, quicksand, rednecks, killer bees, racism, chupacabras...the list goes on. When I suggested this on a forum somewhere, a whole bunch of people said, “HELL, yes!” After all, Ryan Murphy has this thing about dragging past and present social issues into his shows in a really overwrought way, and AHS has yet to really sink its claws into race relations. (The Kit/Alma romance goes there, but since it’s just a prologue to alien abduction, I don’t count it.) Oh, and somebody non-white on the main cast list MIGHT BE NICE. I’m just saying. Also, a story set in the South would lead to all kinds of sumptuous visuals, a wonderfully eerie sense of decayed former glory. Speaking of which, this is another genre that could easily hop around between past and present, assuming the show creators aren’t sick of that by now.
Returning Cast:
Britne Oldford as a chipper young waitress whose older brothers seem to be getting involved in some sort of weird cult. Sarah Paulson as a racist housewife in the 60s (yeah, I totally want to see her play a villain). Alexandra Breckenridge as an ominous Southern Belle whose multiple rich husbands all died under odd circumstances. Morris Chestnut as a black shopkeeper, also in the 60s, who tries to do the right thing in the midst of racial upheaval. Jessica Lange as Breckenridge’s mother, a spiteful Grande Dame who’s also the leader of the voodoo cult. 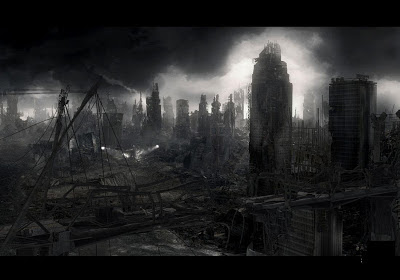 The End of the World
This one’s a major long shot, but...it’d be kinda neat to see AHS tackle an apocalypse scenario. Some might call that science fiction, but there’s always been an undercurrent of terror when civilization crumbles -- not only are there irradiated mutants and such, but you’ve got the breakdown of basic human values, the transformation of ordinary people into desperate, lawless monsters. The innocent are the first to go. Murderous nutjobs and sociopaths rise to power through fear and violence. You get the picture. It’s bleak as can be, so it’s right up the alley of the AHS team. The main problem here is that there are currently two successful shows, The Walking Dead and Revolution, that are tackling this exact scenario. No matter what its own take, AHS would come across as derivative, and not in the “loving homage” kind of way. So I doubt this’ll happen...but I can dream.
Returning Cast:
Evan Peters as an ordinary working-class guy who becomes the haunted leader of a band of survivors. Connie Britton as an abused woman (now widow) who discovers she’ll do anything to protect her young children. Taissa Farmiga as a shy medical student whose healing knowledge comes in mighty handy. Ian McShane as the outwardly dignified, inwardly vicious leader of a dangerous bandit gang. Jessica Lange as a kindly old hippie (and former lover of McShane’s villain) who shelters the heroes in her fortified, solar-powered compound. 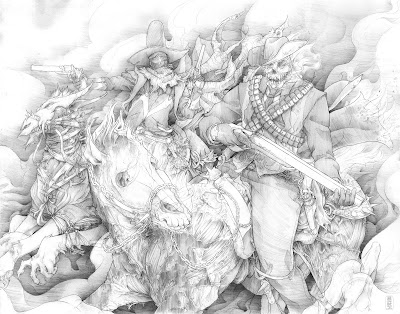 The Weird West
Will AHS set its main story in the past for the second year in a row? Probably not, but if it does, I know just when I want them to visit. Ghost Riders In the Sky, baby! Western-themed shows never quite seem to die, so how about giving us one with a horrific spin? Ghost towns with a ton of actual ghosts, Native American spirits, cannibalistic outlaws, maybe some giant killer groundhogs? If their budget could handle it, I’d be so down for Wild West shenanigans. We’d see the clash between myth and modernity, as the noble archetypes of the Old West slowly and sadly crumble into the desert sand. It’d be a poignant rumination on the fleeting nature of humankind and our dreams, or not, but it’d have undead cowboys either way, so what’s not to love?
Returning Cast:
Evan Peters as a rootin’ tootin’ outlaw with a good heart, who becomes a beleaguered town’s main defender. Lily Rabe, Lizzie Brocheré, and Clea DuVall as victimized yet resourceful prostitutes. Mark Margolis as the snaky town doctor, who’s gained an unholy monopoly on the local resources. Teddy Sears as a strange, ghostly gunslinger who roams the desert under the full moon. Frances Conroy as the matriarch of a reclusive family of werewolves (dude, they’ve gotta do lycanthropy at some point). Jessica Lange as the madame of the brothel, who does all kinds of unscrupulous shit to keep her girls safe.

I can safely say I’d be happy with any of these options. Actually, I’ll be onboard with anything they choose to do for Season Three, because they haven’t let us down yet. Long as it’s not zombies. I am so corpsefuckingly sick of zombies right now. But anything else is okay. We’ll check back next year when I’m (presumably) recapping Season Three. Can you stand me recapping future seasons of American Horror Story? No? Oh, man, it’s gonna rock.
Posted by Dang-Blasted at 6:08 PM