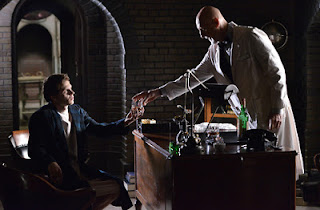 --Sorry. It’s typically my tradition to scream in rage during TV show season finales, usually at the unfairness that I’ll have to wait awhile for more, and at the devilishness of the inevitable cliffhangers. Well, since this was the winter finale of AHS and there were all manner of cliffhangers and maybe-cliffhangers, I guess a scream of rage is called for. Damn this show and its twists.

--Okay, where to begin? Well, how about with the title? Lana spent much of the episode carrying around the titular object as she tried to gear herself up for two unsavory yet intensely desired tasks: A) killing Thredson and B) aborting the bouncing baby boy Thredson just planted in her womb. Sadly, she failed at both these tasks, because A) the abortion didn’t take because Bloody Face Jr. apparently has some sort of Super Placenta Shield, and B) Thredson got away, as we knew he would, and is now lurking somewhere in Briarcliff. Maybe he’s hiding behind his own eyebrows? We know he probably hasn’t taken off yet because Lana, who has become all kinds of kick-ass, manipulated him with the knowledge that he’s a baby daddy and tricked him into chatting about his murders while Kit recorded the whole thing on tape. That tape is safely hidden, but you can bet Thredson won’t rest until he finds it. So, Lana, I hope you weren’t planning on sleeping any time soon. Eh, she’s still better off than she was a couple eps ago.

--SPEAKING OF Bloody Face Jr., we have met the present-day version (or so we assume) and he’s a mulleted, scruffy-faced dude named Johnny Morgan (Dylan McDermott). Visiting a hapless female therapist (Brooke Smith, the lady who had to rub the lotion on her skin lest she get the hose again), Johnny wasted no time in confessing his gradual transition from skinning dead cats to murdering women, then demonstrated by offing the therapist. He’s also pretty damn sure that he is indeed the spawn of Oliver Thredson. Sadly, this doofus lacks Thredson’s finesse and did a pretty sloppy job turning Teresa (RIP, I guess) into a lampshade. I’m wondering where the present-day subplot is going, exactly, though I do love its strange trajectory. Wonder if Johnny will get to meet his birth mommy?

--Every time you think ex-Sister Jude has hit rock-bottom, deeper she goes. Now, in the best kind of irony, she herself is an unwilling inmate in Briarcliff, because her enemies -- Evil Eunice, Arden, and a very much alive Leigh Emerson -- ganged up to frame her for the murder of Frank. Monsignor Howard, who’s so fucking dumb that he shouldn’t get to live (more on that in a moment), ate it right up, and now Jude’s had to trade her habit for an unflattering institutional nightgown and listen while a fake-pious Emerson forgives her for her alleged crimes. But Jude ain’t stupid, and she has her sights set on Lana as a possible ally. Lana, being kick-ass, isn’t impressed, but this did lead to the most awesome moment in the episode: Jude smashing the fuck out of a certain vinyl LP and forever silencing the cringe-inducing strains of “Dominique.” Also, the best line in the episode, Lana’s snarky reaction: “Well, hot damn.” Kick-ass lady super-team, AWAAAAYYYYY!

--Rest in peace, Monsignor Howard. Um, maybe. Have you noticed how freaking hard to kill everyone is this season? Howard, being dumber than bricks, totally fell for Emerson’s newfangled religiosity and set about converting him into a good little apologetic Catholic. In the most predictable response ever, Emerson half-drowned Howard in the baptismal font and then crucified him like Christ, sexy white loincloth and everything. Man, Howard is built! Things ended with Howard begging for help to a kind-faced, black-clad lady in red lipstick. Yay, the Angel of Death’s back! But we didn’t actually see her take Howard’s soul off to a higher (or lower) plane, so I’m guessing he’ll linger for another couple episodes, given the track record.

--None of these things were quite the Big Twist, were they? The Big Big Twist began when Arden approached Kit and admitted his newfound belief in aliens, and unlike Emerson, he wasn’t kidding. In yet another unexpected alliance, Kit agreed to let Arden bring him to the brink of death, the reasoning being that the aliens have some sort of investment in Kit...or at least his sperm. It’s nice to see our good guys regaining control of their own destinies, even if it means taking such risks. I mean, what’s Kit got to lose at this point, except the chance to see Alma again? Arden rammed a needle into Kit’s finely sculpted pecs, and within seconds, things had gone all flashy and hummy. Only the aliens weren’t there to save Kit’s nicely toned ass, they were dropping off a couple passengers: Pepper, the long-vanished “pinhead,” now apparently cured of her mental handicap; and Grace, very much alive and very much pregnant. That’s the good news. The bad news is, Arden was so gobsmacked, he kinda forgot about the whole “bring Kit back to life” thing. But it’s okay, since NO ONE FUCKING DIES THIS SEASON. Can’t wait for Shelley the Nymphomaniac’s return!

--Yep, and now we get a winter hiatus, and things stand thusly. Kit is speeding toward death on an operating table. Howard’s dead or dying. Two psychos (Thredson and Emerson) are on the loose, two kick-ass ladies (Lana and Jude) are out for justice, and two wombs (Lana’s and Grace’s) are carrying presumably abnormal babies. Thus ends Act II of American Horror Story: Asylum. See you in January for the big four-episode climax, which is going to be bugfuck in sooooo many ways.
Posted by Dang-Blasted at 1:12 PM