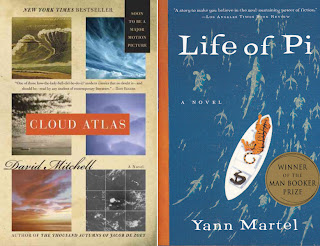 I love books; they’re one of my favorite things in the world. I also love movies based on books, although my love is thoroughly sprinkled with skepticism and paranoia. If a book you like is made into a good film, it’s kind of like tasting one of your favorite desserts after it’s prepared by a different talented chef. Problem is, sometimes the chef puts clam broth in the cake batter. It’s truly agonizing when a good book gets made into a bad movie, and the adaptation process is very fragile; it only takes one nervous studio exec to castrate a film with promise (ahh, Golden Compass, you coulda been a contender). Awesomely, this Fall saw a tilt in the opposite direction, as two movies based on “unfilmable” books were released to critical and commercial success. Both get my stamp of approval. So what makes a book “unfilmable”? Well, maybe nothing. Let’s have a look.

Cloud Atlas by David Mitchell is a book that basically screams, “DON’T FUCKING FILM ME, DAMMIT.” Six tenuously connected stories, each existing in its own time period and genre, presented in a distinctly un-cinematic format. It’s a good thing I hadn’t read the book far in advance, or I might have been terrified by the fact that the film version was being tackled by the freaking Wachowski siblings, last seen faceplanting with Speed Racer. On the other hand, joining them was Tom Tykwer, who made one of my favorite films (Perfume: The Story of a Murderer), so there’s that. What they did was take a book that didn’t work as a movie and reassemble its stories in a way that did. And it was awesome. It works, oddly enough, because it isn’t a slavish adaptation. It is, instead, an explosion of interesting places and people all hitting our senses at once. We are seeing through the eyes of (in chronological order) a sickly American lawyer in the South Seas; a suicidal young composer; a spunky 1970s journalist up to her nostrils in corporate corruption; an elderly publisher wrongfully imprisoned in a nursing home; a revolutionary human clone in a futuristic Korea; and a humble goatherder from a tribal post-post-postapocalypse. These six stories are nested in the novel: each one is interrupted by the next, after which they all resolve themselves in reverse order. In the movie, all six occur at the same time, with much cross-cutting, and I admit that it’s not kind to the uninitiated. You may be confused, but you won’t be bored. 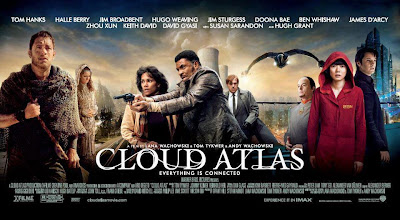 Why does such a fundamental change work in the movie’s favor? Well, I’ve always believed that a film adaptation should be able to stand on its own. Look at how much better the Harry Potter films became when they stopped diligently checking off plot points and began building actual atmosphere. The Cloud Atlas movie isn’t as profound as the book, isn’t as interested in exploring deep, almost subliminal themes of humanity and consciousness. Instead, it presents an easier-to-digest parable about the struggle for freedom and the constant reincarnation of ideas. This is demonstrated via the movie’s much-touted gimmick of having a core group of actors play multiple roles, often switching gender or race. This makeup-heavy process has mixed results; sometimes it’s inspired (Hugh Grant in a topknot and warpaint as a savage cannibal) and other times it’s grotesque (Hugh Grant in a blond jewfro and three inches of latex as an aging bourgeois). I think what matters most is the simple ability of the actors to slip comfortably into different skins, suggesting the reincarnation of a soul without overplaying it. As is often the case, the top-billed stars (Tom Hanks and Halle Berry) are less compelling than the B-listers. Jim Broadbent (as both a crotchety composer and the hapless book editor) is an absolute delight to watch, Ben Whishaw (as the young musical protégé) smolders like few actors can smolder, and Doona Bae (as the martyred clone) allows all kinds of complex emotions to simmer behind her placid, lovely face. The interesting mix of actors, and the range of characters they embody, imply that we’re all just variations on a theme, similar to the classical symphony, also titled Cloud Atlas, that stretches through all the time periods. The book was brilliant. The movie ain’t exactly brilliant, but it works as high-quality cinematic entertainment, balancing Big Ideas with rapturous visuals and expressive movie language. Filmable? Sure.

In another year, Cloud Atlas might have reached higher esteem, but it has the poor luck of sharing the season with Life of Pi, a goddamn masterpiece. The original novel by Yann Martel was also considered unfilmable -- not for its structure or themes, but for the sheer novelty and technical challenges of its premise. If you haven’t heard, it’s about a young Indian boy who spends the better part of a year aboard a lifeboat in the middle of the ocean, sharing this tiny space with a bengal tiger. How the hell do you depict such a journey on film? More importantly, how do you not mishandle the book’s graceful themes of faith and fate? Well, for starters, you hire a director as consistently good as Ang Lee (Jesus, I remember when I was excited that M. Night Shyamalan might helm this. How times change). Then you ignore any concerns about dark subject matter or technical obstacles and just stick closely to the book. You invest in lyrical special effects that add great beauty to the story rather than burying it. And you utilize 3D as a tool, a paintbrush that layers image on top of image in a dreamy collage, rather than a ploy to put more butts in theater seats. Blend well, serve with a side of childlike wonder. Boom. 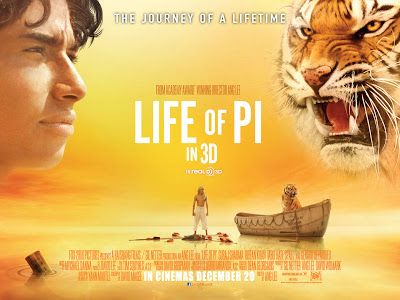 I loved Life of Pi, as did most critics. The book is one of my favorites and my optimism about the film version was rewarded. While Cloud Atlas took a tricky novel and made it into something more accessible, Lee and the team behind Life of Pi simply said, “Why can’t we make this story as the author made it?” I’m so happy they had the freedom to do so. Neither the boy nor the tiger is diminished or sentimentalized. Pi (played with fierceness and grace by Suraj Sharma) is defined by his faith, religious and otherwise, but although he’s a lovable hero, he also does all the stupid, awkward things we would do in a crisis. He’s real, even though his adventures may not be, and as an older man (Irrfan Khan) telling his story, he never glosses over the things that haunt him. The tiger, named Richard Parker and played mostly by a lifelike collection of pixels, is a fucking TIGER, not a Disney cuddlepuss. He wants to eat Pi. Pi wants to not be eaten. Therefore, some common ground must be painfully carved out between the two as they rub elbows in the fragile, floating space that has become their entire world. The great triumph of the film is not that Pi and the tiger become “buddies,” but that they come to acknowledge each other’s right to live. That’s all they can hope for. It’s a harsh world, so harsh that the film’s escape into dream logic comes as a relief. Late in the story, truly fantastic events occur, and the film presents these with an unforced realism, as it does the final “twist” that redefines everything we see. It’s possible that Pi adapts his own story into something easier to bear, and that makes Life of Pi so much more powerful as both a book and a movie. It becomes metafiction. Filmable? Good grief, yes.

I have one more movie to bring up, and just to warn you, this might turn into a mild rant. I haven’t seen the new Anna Karenina with Kiera Knightley and Jude Law, but I’d like to; the trailer made it look sumptuous, striking, and steamy. I’ve never read the book, either; not my preferred genre at all. But I don’t need to be a Tolstoy buff to be amused/annoyed by the lukewarm critical reaction to this film. It hasn’t gotten awful reviews, but it has plenty of detractors and, according to Rotten Tomatoes, holds a lower approval rating than Cloud Atlas. The biggest complaint? Style over substance! The filmmakers are more interested in visual fireworks than really unpacking the characters and story! Bah, humbug! And this is where I have to roll my eyes. Anna Karenina 2012 certainly looks cool; much of it was filmed on a single stage and said stage is frequently visible onscreen, presenting the story as an archetypal play, the Famous Love Story. And such flair is unacceptable? The original novel is far from “unfilmable”; this is only the latest in a series of film adaptations. Yeah, the novel is considered a classic, but then, it is agreed that Cloud Atlas and Life of Pi are both modern classics. So why is poor Anna held to a harsher standard? 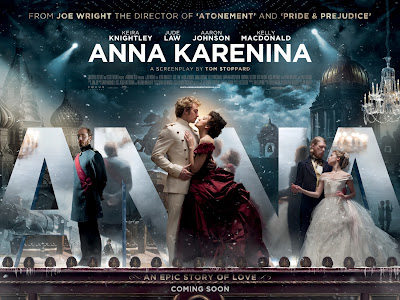 The unspoken rule seems to be that, when it comes to an older, more revered story, you’re required to be more respectful. Well, do you think the people who made Anna Karenina 2012 weren’t intending to be respectful? What they’ve made is a film that takes an old story and realizes it in the language of modern cinema. Modern cinema speaks to us visually, with sights and colors that engage our senses. It’s sumptuous; it begs to be devoured. Cloud Atlas and Life of Pi are such feasts, and they received accolades for it. But Anna Karenina doesn’t deserve a place at the table because it should be, what? More austere? Less opulent? Gimme a break. I’d bet you anything that the new Anna will be viewed and enjoyed by a lot of people who wouldn’t have touched the book with a ten-foot pole, and maybe some of them will go on to read the book and be enlightened. What’s wrong with that? A classic work of fiction is not reserved for dusty academics who will “respect” it more than other people will. What a weird double standard. Here we have two “unfilmable” novels that were made into wonderful, gorgeous movies, and a very filmable novel that, apparently, is punished for attempting the same thing. I call bullshit.

My final take? Nothing is unfilmable. It’s just that some things are filmed poorly. However, the movies I just discussed reveal a possible, exciting new trend, the blending of a novel’s highfaluting themes with a dynamic modern filmmaking style to create something enticing for the senses, the mind, and the emotions. I say, all three of these films succeed. In fact, I wouldn’t mind more adaptations like them, especially of all those venerable classics that are supposedly on too high a pedestal. I love books, I love movies, and I love their latest marriage. And...what’s the tagline? You can’t ask why about love. So there.
Posted by Dang-Blasted at 6:34 PM